My column at Real Clear Politics: “Trump was right about cancel culture, and so were the Harper’s letter signatories” 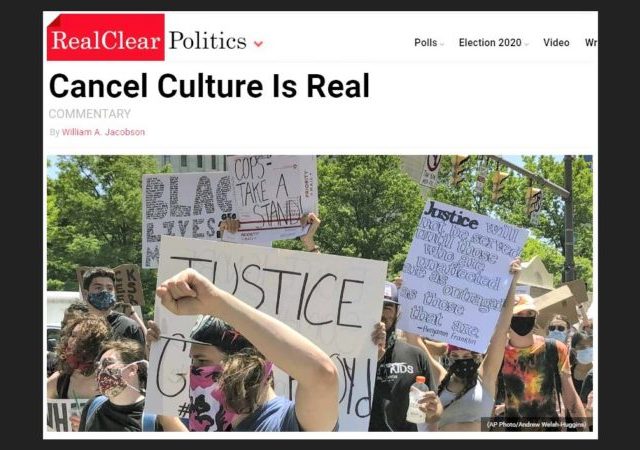 I have a column today at Real Clear Politics, Cancel Culture is Real.

Read the whole thing at the link, and share it. Here is a brief excerpt:

During his July 4, 2020 speech at Mount Rushmore, President Donald Trump referred to the “political weapon” of “cancel culture,” describing it as “driving people from their jobs, shaming dissenters, and demanding total submission from anyone who disagrees.”

Trump’s cancel culture reference was scorned by liberal media outlets such as The New York Times, calling such “culture war” comments a “straw-man version of the left.” Similarly, liberal writer Judd Legum dismissed claims of “cancel culture” as “something that does not exist.”

Yet cancel culture is very real, and it’s getting worse with the increased power of the Black Lives Matter movement. There are numerous documented examples of people being investigated or losing their jobs for criticizing BLM’s origins or tactics.

Even left-of-center authors and professors, in an open letter in Harper’s Magazine, decried the growing “intolerance of opposing views [and] a vogue for public shaming and ostracism …” They too were met with denials that cancel culture was a real problem.

This cancel culture has nothing to do with criticism or debate, and everything to do with silencing opposition so there is no debate. I know. I’m going through it now over my criticisms of BLM….

After discussion of the problem, including the details of my situation, I conclude:

Trump was right about cancel culture, and so were the Harper’s letter signatories. Cancel culture is real and getting worse due to Black Lives Matter orthodoxy.

Head over to RCP for the full column, and spread the link!

The country made a mistake years ago in not returning the freed slaves to Africa–as Lincoln had proposed–and are now paying the price.

Take a look at my comments on how and why BLM needs to understand the teachings of Chairman Mao and how the Maoists plan to exploit and take over BLM works. https://oberlinchaos.com/litigation/hall-of-shame/black-lives-matter-mao/