Ultimately the charges will be dismissed against Flynn, but Judge Sullivan wants it to be slow and painful. And if it drags on into 2021 and Biden is president, well, who knows. Judge Sullivan may be playing the long game.

On June 24, 2020, a panel of the D.C. Circuit Court of Appeals ordered Judge Emmet Sullivan to grant the government’s motion to dismiss the criminal case against Michael Flynn. That Order would have become effective, requiring Sullivan’s compliance, 21 days after that date (July 15).

In an attempt to forestall compliance, on July 9, Sullivan filed a Petition for Rehearing En Banc, seeking a ruling by all 11 active judges on the appeals court.

Upon consideration of the petition for rehearing en banc, it is, on the court’s own motion,

ORDERED that, within 10 days of the date of this order, petitioner file a response to the petition for rehearing en banc, not to exceed 3,900 words. The government is invited to respond in its discretion within the same ten-day period. Any response from the government may not exceed 3,900 words. Absent an order of the court, a reply to the responses will not be accepted for filing. It is

FURTHER ORDERED that the effectiveness of this court’s order issued June 24, 2020, will be stayed pending disposition of the petition for rehearing en banc. See D.C. Cir. Rule 41(a)(3) (order granting writ becomes effective automatically 21 days after
issuance in the absence of an order or other special direction of this court to thecontrary). 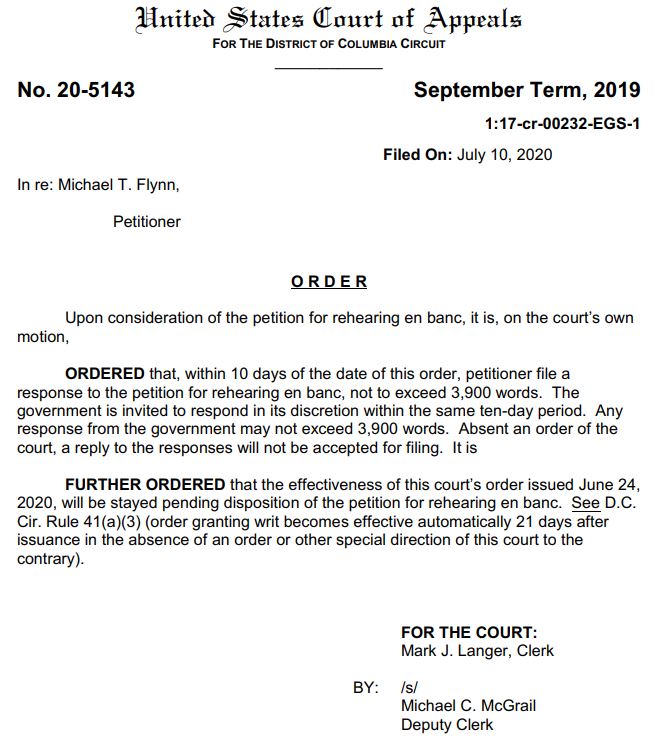 I wouldn’t read too much into this Order. It does not appear to be on the merits or necessarily reflect that the court will hear the case en banc. That’s the non-cynical me speaking. The cynical me says Sullivan is a skilled litigator who thinks he will win on this.

Ultimately the charges will be dismissed against Flynn, but Judge Sullivan wants it to be slow and painful. And if it drags on into 2021 and Biden is president, well, who knows. Judge Sullivan may be playing the long game.

Today more records were finally released showing that the FBI did not think Flynn lied.

The U.S. Justice Department this week handed over 14 new pages of documents that show misconduct by prosecutors who suppressed evidence that would have helped him, Flynn’s lawyer, Sidney Powell, said in a filing Friday with the U.S. Court of Appeals in Washington.

“These documents establish that on January 25, 2017 — the day after the agents ambushed him at the White House — the agents and DOJ officials knew General Flynn’s statements were not material to any investigation, that he was ‘open and forthcoming’ with the agents, that he had no intent to deceive them, and that he believed he was fully truthful with them,” according to the filing.

Flynn pleaded guilty to lying to two FBI agents about his phone calls with Russia’s ambassador to the U.S. in the early days of the Russia probe. Even so, he appeared to overcome the case in May when the Justice Department filed a surprise motion to dismiss, citing FBI failures and arguing that Flynn’s lies to the two agents weren’t “material” to the investigation.

yet they were hidden from the defense for three years…The production includes heavily redacted notes from Peter Strzok taken at the same January 25, 2017 meeting. Strzok’s notes establish the DOJ nixed any Logan Act prosecution." @CBSNews pic.twitter.com/3GhoF0gCi3

"FBI advised that they believed Flynn believed what he was saying was true."

FBI determined "Flynn was not acting as an agent of Russia." pic.twitter.com/ZwID3tHJPF

For background on the Sullivan-Flynn litigation, see these prior posts:

It’s always amazing to find out just how many non-adults there are in the system.

So let me see if I’ve got this right. Even if it is later proven that you are set-up by corrupt federal prosecutors once you accept a federal plea agreement and plead guilty you cannot withdraw that plea for any reason. And if you try to withdraw the plea you will be threatened with perjury charges by an activist federal judge.

Did I get that correct?

Seems to me that this is telling anyone facing any kind of criminal federal charges to simply tell the federal prosecutors to fuck off on any plea deals and force them to take each and every defendant to trial to preserve the rights of the accused so that if later it is discovered the federal prosecutors acted in a corrupt/illegal manner they can challenge the verdict and sentence.

As a retired DEA agent, I am appalled by the abuse of power of this judge. I am not a lawyer, and there may be some legal point that allows him to do this, but is this in the spirit of the law?

As another retired GS-1811 I agree wholeheartedly. Not just this judge, but the entire system which has abused the intelligence and criminal systems in an effort to overthrow the duly elected President of the United States and, failing that, disrupt his administration and punish people involved with the President. I’d like to say that I can’t believe the Bureau and DoJ would violate Brady for years, but sadly it is a fact and my opinion of the Bureau was such that I found it easy to believe of those in HQ.

Again, Paul Cassell and Michael Luttig, two eminent jurists with impeccable conservative credentials, both think the panel got it wrong and that for the sake of the law it should be reversed. I think their arguments should be given great weight.

But, beyond yourself and perhaps the two lawyers you cite, who cares what you think about what is primarily a political issue and abomination involving the system of “Just Us”?

Andrew McCarthey respectfully disagrees with Luttig’s summary and conclusion. I agree with McCarthy, not with Luttig.