The church did not “amass” anything, the loans will be forgiven only if the funds are used to support employee payroll just like any other entity receiving Paycheck Protection Program funding. 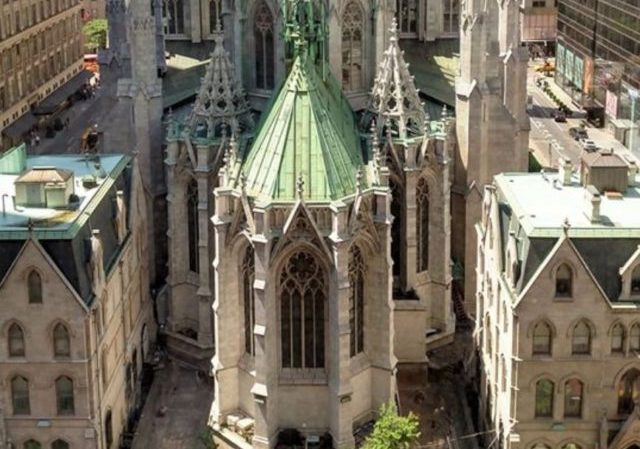 And here are the two lead paragraphs of the linked article:

The U.S. Roman Catholic Church used a special and unprecedented exemption from federal rules to amass at least $1.4 billion in taxpayer-backed coronavirus aid, with many millions going to dioceses that have paid huge settlements or sought bankruptcy protection because of clergy sexual abuse cover-ups.

The church’s haul may have reached — or even exceeded — $3.5 billion, making a global religious institution with more than a billion followers among the biggest winners in the U.S. government’s pandemic relief efforts, an Associated Press analysis of federal data released this week found.

The AP suggests that the Catholic Church was engaged in nefarious schemes to pocket taxpayer money, highlighting, in particular, that loans went to the Archdiocese of Orange County, “where a sparkling glass cathedral estimated to cost over $70 million recently opened,” and “the diocese covering Wheeling-Charleston, West Virginia, where a church investigation revealed last year that then-Bishop Michael Bransfield embezzled funds and made sexual advances toward young priests.”

And their words produced the outrage they were designed to create, with such replies as:

The Church gets this much money whilst their parishioners are starving, being homeless and dying. Smh.

One one the wealthiest organizations in history needs aid?

The church has closed schools, some of them in underserved neighborhoods, has merged and closed churches in order to resolve its financial issues that largely came from settlements paid to victims of abuse-now the church scores a big financial haul.

I was raised Catholic and this is a disgustingly massive scam. You want to defund something start here.

The reality is, of course, far different.

By the very nature of the PPP forgivable loan program, as clear by the very label of Paycheck Protection Program, the funds went not to “churches,” but to their employees.  In the same manner as any small business in which revenues have dropped due to pandemic-caused lockdowns, were given a lifeline to make payroll rather than sending their employees to the unemployment lines, so, too, church employees were given this same protection — and churches of all denominations made use of it.  In May, CBS reported that 40% of Protestant churches in the U.S. had applied for PPP loans, and 23% of churches ended up receiving loans.

The AP report has no particular interest in assessing whether Catholic churches were disproportionately likely to receive these loans — though, if this should happen to be the case, it would be easily enough explained, since it’s a matter of common sense that larger organizations have a greater ability to make sense of the complex process required to apply.

The law that created the Paycheck Protection Program let nonprofits participate, as long as they abided by SBA’s “affiliation rule.” The rule typically says that only businesses with fewer than 500 employees, including at all subsidiaries, are eligible.

Lobbying by the church helped religious organizations get an exception.

But, again, the difference between Catholic and Protestant churches isn’t a matter of wealth or need.  It is merely a matter of organizational structure that, depending on the diocesan structure, the legal “employer” might be a bishop, and the diocese might have, in total, more than 500 employees, when all the priests, church secretaries, organists, and schoolteachers are added up.  Here is the “loophole” text about which the AP complains, straight from the Small Business Administration’s description of loans for faith-based organizations:

Not necessarily. Under SBA’s regulations, an affiliation may arise among entities in various ways, including from common ownership, common management, or identity of interest. 13 C.F.R. §§ 121.103 and 121.301. These regulations are applicable to applicants for PPP loans. (They also apply to the EIDL program when determining certain loan terms, although aggregating the number of employees of affiliated organizations does not affect eligibility for EIDL loans.) Some faith-based organizations likely would qualify as “affiliated” with other entities under the applicable affiliation rules. Entities that are affiliated according to SBA’s affiliation rules must add up their employee numbers in determining whether they have 500 or fewer employees.

That’s it.  A church which is deemed to be part of an entity with over 500 employees, solely because its religious beliefs prescribe it, when, absent these beliefs, they’d be independent of others and fall below the threshold, is deemed eligible.  There’s no outrage here — which means the only outrageous element of this is the AP’s bias against the Catholic Church.

Elizabeth Bauer is a Forbes contributor and actuary who lives in the Chicago area. She also writes as Jane the Actuary at Patheos.com, is an occasional contributor at The Federalist, and tweets at @janetheactuary.

No one will ever pay this debt. The dollar is toast. The country is being looted and I don’t mean by the people in the streets.