While black neighborhoods face economic devastation, WaPo winges about a costume from two years ago. Privileged much? 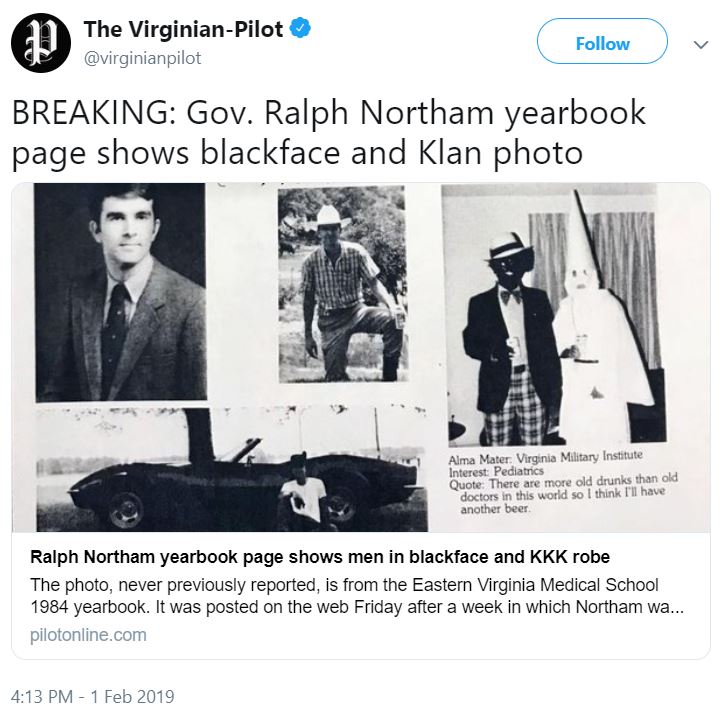 If there’s one moment that should chill the radical left and its mind-numbed robots to its core, it’s the recent Washington Post article attacking a random leftist woman for “racism” at one of its own Halloween costume parties, a party that took place two years ago.

The appalling, sloppy, unprofessional mean girl hit piece on a non-public figure ended up getting the woman fired from her job.

WaPo is facing backlash over the piece, but that it thought it worth publishing at all epitomizes what is wrong with leftstream journalism today.  The mean girls of high school took over the fourth estate and are free to spew their vindictive, petty, out-of-touch vomit on anyone who will listen (or read).  Fewer are.  And no wonder.

So the surface story goes like this:  A middle-aged leftist woman with long ties to the progressive “cause” showed up at a 2018 WaPo Halloween party dressed in a conservative suit and black face with a name tag stating that she’s Megyn Kelly.

Note that I am not using the woman’s name in this post; while a leftist, she is not a public figure and finds herself a victim of the absolutely insane and, as in this case, often retroactive, attacks on free speech and expression that are reaching feverish pitch across this country.

With this I concur:

I wrote about this WAPO debacle. Laughed at it. But couldn’t bring myself to publish the woman’s name. She’s been through enough hell. Not a public person. WAPO is garbage. https://t.co/J2RBp8vVF1

I will not add to her fresh hell by naming her here.

For context on this WaPo travesty, this Halloween party took place during the same week that left-wing wokeness rained down its fury on Kelly for asking what is wrong with black face at Halloween.  Or whatever she said . . . I stopped caring when she proved herself devoid of sound judgement by leaving a top spot at Fox News for a “lucrative deal” that meant she had to act like something she’s not.  Kelly as gushy, touchy-feely “oooh, that’s a great meringue!  You used egg whites for that?! Amazing!” was never going to fly; her inability to understand the limits of her likability showed a serious lack of judgement.

Regardless, though, Kelly was under fire that week for her “insensitive” and “racist” comment about Halloween costumes (a comment that, arguably, ended up costing her job), so it’s not at all strange that a raving leftie would think this a ripe moment for ridicule via a Megyn Kelly in black face costume.

Her fellow WaPo party-goers—i.e. the elite, humorless, group-think radical left—were not amused.  Of course.  Nothing is funny or good, everything is dire and dangerous for this dour anti-American doomsday cult, so that’s no surprise.  To us.   She was reportedly devastated and left the party in tears.

In fact, according to WaPo, two party-goers claim that now, two years later, they are still traumatized by having this Halloween costume inflicted upon their eyeballs and psyche in 2018.

At the 2018 party at the home of The Washington Post’s editorial cartoonist, in addition to several Ruth Bader Ginsburgs, someone dressed as the “Mueller Witch Hunt” and Post columnist Dana Milbank came as just-confirmed Supreme Court Justice Brett M. Kavanaugh, complete with a beer-dispensing device on his head. A guest named Lexie Gruber wore a scary “Beetlejuice” get-up and called herself “dead.”

A middle-aged white woman . . .  wore a conservative business suit and a name tag that said, “Hello, My Name is Megyn Kelly.” Her face was almost entirely blackened with makeup. Kelly, then an NBC morning show host, had just that week caused a stir by defending the use of blackface by white people: “When I was a kid, that was okay, as long as you were dressing up as, like, a character.”

. . . . Gruber felt compelled to revive the 2018 incident. Last week, she emailed Toles, whom she has never met.

“In 2018, I attended a Halloween party at your home,” she wrote. “I understand that you are not responsible for the behavior of your guests, but at the party, a woman was in Blackface. She harassed me and my friend — the only two women of color — and it was clear she made her ‘costume’ with racist intent.”

Gruber, a 27-year-old management consultant, told Toles that the incident had “weighed heavily on my heart — it was abhorrent and egregious.” She asked him to help her identify the woman.

Wow.  Really?  I can think of absolutely nothing more privileged, more self-indulgent, nor more nauseating than privileged lefties attending an elite WaPo party and getting the vapors over a Halloween costume.  Really?!!?

I’m sorry, but how freaking fragile and in need of immediate psychological care are you if a costume you saw two years ago wrecks your life to this day? The insanity is off the scales.

And it cost this woman her job.

This woman was fired because the Washington Post decided an offensive Halloween costume (for which she was already humiliated) is national news. Way to speak truth to power. pic.twitter.com/yfA8oDeMhC

But, hey, this is “journalism” circa 2020: All standards are gone, and cancelling private citizens, including those on your own side, for not being sufficiently “woke” is, after all, in the dusty, musty decades-old fascist playbook.

WaPo is probably awaiting its Pulitzer for uncovering this subversive, non-public member of their own voting bloc and her rampant “racism” that has scarred two wokesters for two years, maybe forever.  Who can ever recover from that trauma?!?

Good grief, try being one of the hundreds of minority-owned businesses who just saw their whole life go up in literal flames and get back to me about trauma.

If you’re an adult who is “physically & emotionally” threatened by an offensive Halloween constume and still scarred by it 2 years later— get help y’all. That’s not on anyone but you

Waaah, ‘I saw a microaggressive costume two years ago and I’m still all sad and stuff’ reveals the radical left for who and what it is.

Minority communities have been destroyed by this exact leftist elite wokeism. They care exactly zero much about black businesses burned to the ground, about black people who now have no way to get food at a neighborhood store because they’ve all been destroyed by wokesters.  Nor, obviously from their lack of results, do they care about black people who have been fed for decades on two- and four-year cycles of empty promises and blatant lies for votes.

‘DEVASTATED’: Video of young black mother trying to shop in a looted grocery store is EVERYTHING wrong with the Left’s #BLM narrative

Destroying the life and livelihood of a private citizen for some “cause” is so far beyond the pale, but this is what the rabid, vile, and purely evil left has devolved into.  Ends, means, destruction, chaos.

Ironically, in defending Ralph “Black Face” Northam, WaPo published a glowing piece stating that “America is based on second chances”:

THE HISTORY of U.S. politics is full of second chances — of scandal-scarred, disgraced and irredeemable public figures staging improbable comebacks — but few back-from-the-dead narratives have been as swift and sure-footed as the one Virginia Gov. Ralph Northam has managed this year.

Since Feb. 1, when the discovery of a racist photo on his medical school yearbook page dealt what seemed a lethal blow to his political career, Mr. Northam has refocused his governorship on racial equity and reconciliation in what amounted to an extended act of public contrition and atonement. It has been astonishingly effective not just in terms of his own political rehabilitation — his poll numbers climbed from the depths — but also in setting a clear theme for his four-year term in office, delimited by Virginia’s prohibition on governors succeeding themselves.

In the process, Mr. Northam, a Democrat, persuaded many Virginians to allow him a season of penitence. Not least among them are African Americans who were stunned when the governor first admitted, then denied, appearing in the photo in which one figure is in blackface and another is in a Ku Klux Klan costume, while adding that he did don blackface, appearing as Michael Jackson at a dance contest, the same year the yearbook was published.

“A season of penitence” is, apparently, so last year.

This year, WaPo is coming for scalps, needlessly destroying private lives and livelihoods in a (history tells us) futile attempt to signal itself the wokest wokester on the woke block.

Apparently, WaPo imagines it is thereby granted some sort of magical immunity from the radical, violent mobs they’ve had no small part in unleashing on law-abiding citizens.

What makes this WaPo attack on a private citizen who is on their own side particularly perplexing is that . . . she’s a private citizen who is on their side.  This isn’t some MAGA Trumpster hell-bent on crazy ideas like defending and protecting the Constitution; this is a leftist, one of them, that they went to unsupportable, even laughable, and certainly unethical lengths to “out” as a “racist.”

One has to wonder why.

"On her Facebook page, Schafer posts often about her opposition to President Trump and her support of immigrants, gun control, gay rights and anti-racism causes, including photos she took at marches and demonstrations she attended.” https://t.co/qtMCLpE8ny

I find this very interesting.  And not a little bit amusing because the mob is coming for them, all of them, long before it pulls up its big boy pants and even imagines taking on the well-armed, well-trained, thoroughly-ready flyover rubes of deplorable America.

Maybe WaPo sees this and is chumming the waters with its low-hanging fruit hoping to pacify their own “woke” mobs? Tossing their own to the woke mobs in a sort of bizarre sacrifice in the name of their “woke” religion? Fervently hoping the woke mobs pass them by?

Note to Wapo: that never works.  You just signal weakness, and there is nothing a mob likes— and feeds on—more than weakness.

Second chances are only for the elites.

The best theory I have seen as to why WaPo ran this story is that it was a CYA piece. Supposedly, right wing media reporters were nosing around to get a story about “Blackface at a WaPo Party”, so WaPo had to strike first and throw that unfortunate woman under the bus. This makes sense – they ran the story to protect WaPo.