“This statue stands on sacred and stolen Ho Chunk land, and whatever stands there should not stand as a reminder of racist legacies that contributed to this campus.” 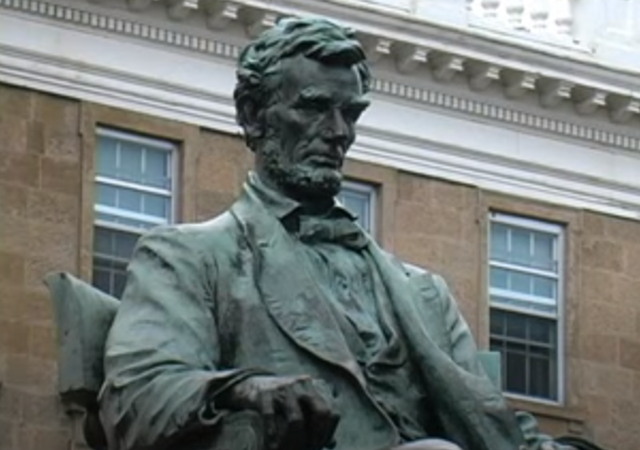 Student activists at the University of Wisconsin-Madison are exploiting the current trend of statue toppling, to petition for the removal of a campus statue of President Abraham Lincoln.

Hating historic statues is all the rage these days.

You may be wondering how they justify wanting to remove Lincoln.

The petition at Change.org explains:

Remove and replace “The Lincoln Statue” from Bascom Hill

Many UW-Madison students wait to take their picture on the lap of the Abe Lincoln statue atop Bascom Hill when they graduate. However, few know how this statue got to the top of the hill, and who put it there.

A little history about the Abraham Lincoln statue sitting at the top of Bascom that many seem to know and love:

One of the primary donors is Richard Lloyd Jones. This man was well-known for holding ultra-racist beliefs. He was a journalist that wrote articles inciting violence and even murder of black people. He also published the piece that instigated the Tulsa Massacre, which devastated Black Wall Street in 1821. The other primary donor was a man named Thomas Brittingham Jr, a known member of the KKK. As for Abraham Lincoln, while his history with race relations is questionable, this statue has nothing to do with the creation and continuation of education on UW-Madison’s campus and was merely a gift of political capital.

We ask that the university consider removing the statue from Bascom and direct funding towards a new installation acknowledging the past, present and future of UW-Madison. This statue stands on sacred and stolen Ho Chunk land, and whatever stands there should not stand as a reminder of racist legacies that contributed to this campus.

There is a rich history of left-wing UW-Madison students complaining about this statue and trying to remove it.

This is not the only time in the history of the University of Wisconsin that the Lincoln statue has been caught in the crosshairs of protest.

In 2015, as Black Lives Matter protests engulfed the campus, members of a then-new campus group called “About Race UW” proposed the removal of the statue.

In 2016, the statue was draped in a black tarp during a racial protest by students.

In 2017, the student government approved a resolution to educate the campus community about Lincoln’s “oppression.”

In the past, campus leaders have rebuffed such demands. The College Fix this week reached out to the campus’ media affairs division and has yet to hear back.

The Abraham Lincoln statue has been a part of UW tradition since it was placed on Bascom Hill in 1919. Campus legend states that if graduating students climb into Lincoln’s lap and whisper their plans for life after graduation, they will come true. Students who are not graduating, but dare to sit in Lincoln’s lap, will supposedly cause him to rise from his chair and kick them off the pedestal to the bottom of the hill.

This looks like nothing more than an exercise in power. The student activists want to be able to say that they got the school to do something they wanted.

The administration should tell them to pound sand.

When protestors cross the line which includes acts of sedition and/or disrupting the lives of other innocent people, blocking their movement, violent acts, or stopping them from accomplishing their jobs or purpose, blocking their speech, and/or unnecessarily interfering with the activities of their environment, or smear tactics, then they are violating their Constitutional rights, 1st amendment rights, breaking existing laws, and need to be brought to justice. Protesting has its limits and place. These protests are not spontaneous and are organized activities by outside domestic terrorist groups. Many are paid by George Soros, BLM, Antifa, and related extreme liberal groups ( Obama). Those who incite and/or fund riots/looting/arson (George Soros) need to be arrested for being an accomplice and/or sedition. They need to account and pay for the damage they create including costs created by obfuscation. Rioters and looters/arsonists should be placed on notice that they can/will be shot! Likewise any rioter/looter/arsonist arrested who lives outside of the immediate area does not have a “dog in the fight” and deserves an additional citation for being a paid rioter/looter and face felony charges. It is a federal crime to cross state lines or to use interstate facilities to incite or participate in violent rioting. Those rioters/arsonists arrested need to have a criminal/outstanding warrant background check, students need to be expelled, and all face loss of any government subsistence. Unmasking and disarming protestors of weapons should be enforced and Mayors, governors, government officials allowing out of control riots or preventing the police from doing their jobs should be arrested and held accountable.
I hate the probable fact that the real issue is we have a segment of our society that feels destroying other people’s lives when they face adversity is justified.
These are the inevitable consequences when a nation forgets who and what it is and when some of its citizens reject the values that built and sustained it. But tearing things down, including history, does not help others rise. No life is improved, no family stabilized.
“Out of many, one” is our national motto. We seem to be practicing it today about as much as the unofficial one, “In God we trust.”

“When every record has been destroyed or falsified, every book rewritten, every picture has been repainted, every statue and Street building has been renamed, every date has been altered. And the process is continuing day by day and minute by minute. History has stopped. Nothing exists except an endless present in which the State is always right.” -George Orwell ‘1984’
We were warned

“This statue stands on sacred and stolen Ho Chunk land”

“You’re right. We’ll be razing your dorms at the same time. Pack what you can in the next 24 hours.”