Oklahoma County DA Charges Rioters: “This is not Seattle. We’re not putting up with this lawlessness here.”

Oklahoma County DA Charges Rioters: “This is not Seattle. We’re not putting up with this lawlessness here.”

Charges Include Terrorism, Rioting, Assault, All Resulting From Destruction In Last Weekend of May 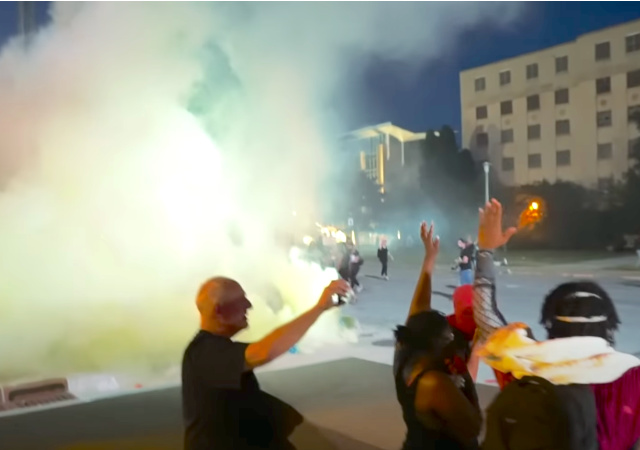 I live in Oklahoma City. I have to say the riots we experienced were tame compared to other cities after the death of George Floyd, but riots and violence did happen.

Oklahoma County District Attorney David Prater decided to “get-tough” and charge some of the protesters with terrorism, rioting, and assault as a way to stop future riots.

From The Oklahoman (emphasis mine):

“This is not Seattle,” Prater said Friday. “We’re not putting up with this lawlessness here.”

Also charged Friday were five defendants identified as involved in the painting of murals in downtown Oklahoma City this week. They are accused in an incitement to riot charge of interfering with a police sergeant who was trying to take a homicide witness for an interview at police headquarters Tuesday.

In court affidavits filed with the charges, police claimed that several agitators during the May 30 protest stayed to the center to keep the crowd in an agitated state.

“Several known supporters of anti-establishment organizations were present in the crowd.”

I noticed that people held peaceful protests during the day. Only in Oklahoma do you see leftists picking up after themselves and others after a protest.

There’s even a video of people cleaning up graffiti on the capital building.

In other videos, I saw protesters yelling at anyone who threw water bottles or other items at the police. I saw police and protesters talking, exchanging numbers.

I love my adopted city so much.

But after sundown, the riots began. One more even damaged the Oklahoma City National Memorial and Museum.

These three are named in the terrorism cases:

Isael Antonio Ortiz, 21, of Welch: “He is accused of burning an Oklahoma County sheriff’s van May 30 and attempting to burn a bail bonds business ‘along with a large crowd of other individuals.'”

Eric Christopher Ruffin, 26, of OKC: “Police reported he encouraged the ‘wanton destruction’ and recorded” the burning of the van with Ortiz on “Facebook Live. He is quoted from the Facebook video as saying every single one of those that kill Black people need to die and ‘that’s what happens when you got numbers outside.'”

Malachi Davis, 18, of Edmond: “He was identified as a suspect from a Facebook video that shows him with brass knuckles on a bloody hand outside” of CJ’s Bail Bonds and “accused of breaking the windows.”

Police reported Holt was identified from social media as the protester who threw rocks that caused damage at the the Oklahoma City National Memorial & Museum.

Assault and Battery Upon a Police Officer:

Charged with assault and battery upon a police officer was Saxon Weber, 26, of Oklahoma City. He is accused of shoving a police officer who was trying to arrest another protester May 30. Police reported Weber had a pistol on him and was wearing a bullet-proof vest.

Prater mentioned Seattle because radicals took over a portion of the city around a police precinct building. The city officials have brushed it off, but over 20 people have joined a lawsuit against Mayor Jenny Durkan and Gov. Jay Inslee.

Durkan said the barricades would come down, but as of Sunday evening, it has not happened. Neighbors and business owners have grown angry at officials for not stepping in.

Thanks for the update Mary.

I heard some people did some things there….

I’m hoping this years democrat convention makes Chicago look like a tea party. Although with biden as the titular head of the party there is a very strong reason to hold one over the internet.
Can’t have quid pro slo joe toddle out onto the stage with a big wet spot on the front of his pants.

It’s all useless “virtue signaling” of one sort or another until there are some convictions and incarcerations.

Can we tax virtue signaling?

Facebook has been taking a lot of flak for censoring conservative content, but allowing all sorts of leftist content that is in obvious violation of their TOS. I’m beginning to wonder if Facebook isn’t quietly working with police, allowing this material to stay on the platform as an aid to the identification, arrest, and prosecution of suspects.

Given the number of FB moderators that have turned out to be absolutely racist left wing bigots, I rather doubt they are doing it intentionally, but it serves that purpose, none the less 🙂