“Running this puts Black @nytimes staff in danger,” tweeted several journalists, while others called for op-ed to be taken down. 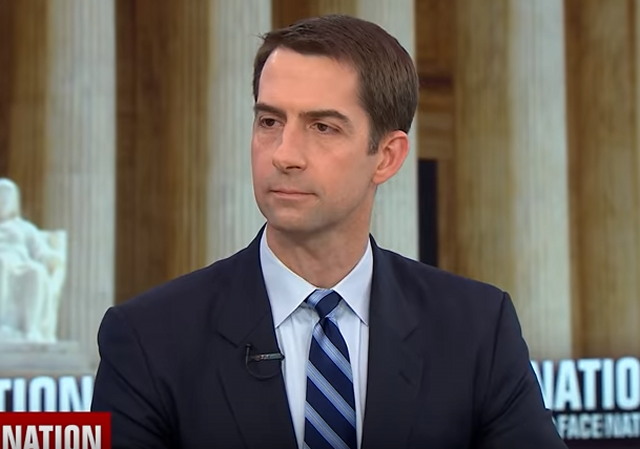 Along with the protests in cities across America in the aftermath of the death of George Floyd has come rioting, looting, acts of arson, and violent assaults on random citizens and law enforcement alike.

The apocalyptic scenes look like something straight out of “The Purge,” so much so that there are growing calls from Republicans, including President Trump, for the National Guard to intervene.

One such Republican is Sen. Tom Cotton (R-AR), a U.S. Army veteran who served in the post-9/11 Iraq and Afghanistan wars. Cotton wrote an op-ed published in the New York Times Wednesday in which he argued that the only way to quell the violence in the cities currently on fire was by having Trump invoke the Insurrection Act:

The pace of looting and disorder may fluctuate from night to night, but it’s past time to support local law enforcement with federal authority. Some governors have mobilized the National Guard, yet others refuse, and in some cases the rioters still outnumber the police and Guard combined. In these circumstances, the Insurrection Act authorizes the president to employ the military “or any other means” in “cases of insurrection, or obstruction to the laws.”

For instance, during the 1950s and 1960s, Presidents Dwight Eisenhower, John Kennedy and Lyndon Johnson called out the military to disperse mobs that prevented school desegregation or threatened innocent lives and property. This happened in my own state. Gov. Orval Faubus, a racist Democrat, mobilized our National Guard in 1957 to obstruct desegregation at Little Rock Central High School. President Eisenhower federalized the Guard and called in the 101st Airborne in response. The failure to do so, he said, “would be tantamount to acquiescence in anarchy.”

More recently, President George H.W. Bush ordered the Army’s Seventh Infantry and 1,500 Marines to protect Los Angeles during race riots in 1992. He acknowledged his disgust at Rodney King’s treatment — “what I saw made me sick” — but he knew deadly rioting would only multiply the victims, of all races and from all walks of life.

A recent Morning Consult poll shows that a majority of Americans agree with using the military to assist police in restoring order:

Good time to remind people that a recent poll by @MorningConsult found 58 percent of voters support using the military to deal with protests and demonstrations across the country, alongside the police. Oftentimes reality is different than woke Twitter.

Cotton’s position on the issue has stirred up a debate over whether or not these actions should take place, with even some fellow conservative war veterans disagreeing with his argument.

Vigorous debate over stances like Cotton’s is one of the many things that makes America so great. Unfortunately, not everyone feels such discussions are healthy, as we have learned over the last 24 hours from New York Times reporters who rushed to the Twitter machine to allege the op-ed puts their black colleagues “in danger:”

Multiple New York Times staff members are protesting an op-ed published in the Times by GOP Sen. Tom Cotton, writing on social media, “Running this puts Black @nytimes staff in danger” alongside a screenshot of the piece.

By Wednesday evening, dozens of Times staffers, journalists from other organizations and writers protested the piece by sharing the same message of “danger” for Black NYT staffers. Sewell Chan, a former NYT op-ed editor and now the editorial page editor of the Los Angeles Times, also criticized the Times for running the piece, saying it “falls short of sound journalistic practice.”

And late Wednesday, the paper’s union condemned the decision to publish Cotton’s article, calling it “a clear threat to the health and safety of journalists we represent.”

Here are some of the tweets:

NYT reporters in a rare open revolt over the opinion side running Tom Cotton’s op-Ed calling to deploy the military to “restore order.” pic.twitter.com/MgLuR8EunJ

There are also Times employees taking part in sick-outs in protest of Cotton’s op-ed:

Along with well over a dozen of my colleagues who work on publishing tools at the @nytimes, today I am calling out sick in protest of the Tom Cotton op-ed.

The Times’ editorial page editor James Bennet wrote a lengthy Twitter thread explaining why the paper published Cotton’s opinion piece. He first pointed out how woke they allegedly were about the George Floyd protests and racial injustice in general and then pivoting to why it was essential to post pieces like Cotton’s since he was in a position as a U.S. Senator to set policy.

Look, reasonable people can disagree as to whether or not Cotton made a good argument. But what the “concerned” Times reporters are doing here is trying to shut down debate altogether by declaring an idea they disagree with as unsafe:

It's a way to use "safety concerns" to shut down discourse instead of debate the relevant facts, arguments, theories. And it's becoming increasingly popular unfortunately.

Keep in mind, too, that liberally biased reporters at news outlets like the New York Times are in general agreement with the protesters that the police are allegedly racist and can’t be trusted. So they don’t trust the police nor the National Guard to stop the riots.

So exactly who do they think should restore order to these cities? Or perhaps they believe these cities should be burned to the ground to save America? We don’t know exactly where they are on this, because they’re too busy virtue signaling about an op-ed.

I’d also like to point out that no one at the Times’ expressed even the barest hint of concern for the safety of their female colleagues after the paper investigated Tara Reade’s sexual assault allegations against Joe Biden – not to get to the bottom of the story, but to act as an apologist for Biden by downplaying Reade’s claims to drag him over the finish line.

So no, we don’t need any pearl-clutching on staff safety over an op-ed from any hypocritical reporter for the New York Times. What we do need to hear from them, however, is how America is supposed to debate the critical issues of the day when “journalists” at the supposed newspaper of record want to squelch those with which they disagree.

If the NY Times is against it, it must be good for America and be supported! Simple really.

I fully expect there to be a Snake Plissken sighting any time now.

He’s escaping from LA at this very moment.

How diverse and inclusive of them.

And they’re totally not a propaganda operation for a particular PoV. Pinky swear.

All the woke youngsters employed at the times HATE it when someone says something they don’t like. Now you must grovel at their feet and promised never to do it again or else they’ll call out sick for a whole week!!!

When your hiring criteria change from valuing professionalism and competence, to valuing cancel-culture political correctness, wokeness, and N-fer quotas… and the new hires suddenly monkeywrench your entire business because something you weren’t even paying attention to triggers them.

Ah, there isn’t enough popcorn in the world.