“And in this nation, especially on Juneteenth, we celebrate the fact that from the founding of this nation, we cherish the ideal that all of us are created equal and endowed by our creator with certain inalienable rights. And so all lives matter in a very real sense,” said VP Pence. 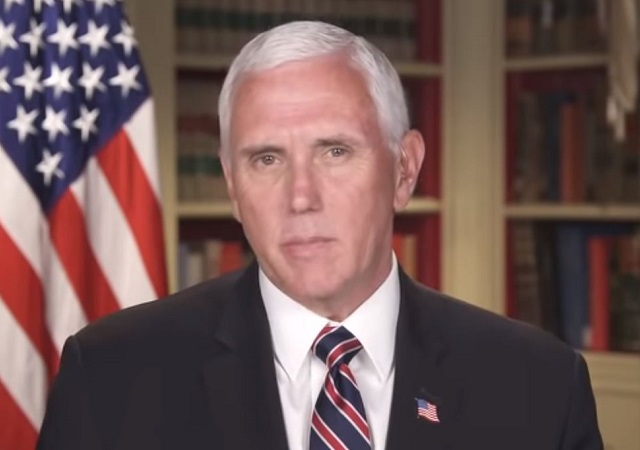 Vice President Mike Pence sat down Friday for an interview with 6ABC Action News anchor Brian Taff about police reform efforts in the aftermath of the death of George Floyd. What he got instead were biased questions that sounded like they came straight out of the radical Black Lives Matter group’s playbook.

Taff cranked things up straight out of the gate with his first question, which he set up by pretending to view the movement through the eyes of the protesters:

Taff: “But let’s begin here, sir, as you know we are in the midst of a movement in this country. And, I think it’s fair to say, in the estimation of those who are marching in the streets across America right now, a movement that is finally getting some traction. And as you know, sir, that movement is fueled by the words ‘Black lives matter.'”

Having teed up his own question about how allegedly important it was to hear people say “Black lives matter,” Taff then pointedly asked Pence if he’d say it since “only really a handful of elected Republican leaders” had said the words:

Taff: “And yet, despite that, and the volume with which we’re hearing it and the monumental nature of these changes, there are only really a handful of elected Republican leaders in Washington who have uttered those words – ‘Black lives matter.’ And I wonder, sir, if those are words that you will utter right here, right here today – ‘Black lives matter.’ Can you say those words?”

Pence did not take the bait. He instead stressed the importance of celebrating Juneteenth and noted that we were all created equal, saying ” all lives matter in a very real sense”:

Pence: “Well, Brian, let me just say that what happened to George Floyd was a tragedy. And in this nation, especially on Juneteenth, we celebrate the fact that from the founding of this nation, we cherish the ideal that all of us are created equal and endowed by our creator with certain inalienable rights. And so all lives matter in a very real sense.

It’s the reason why President Trump in the wake of that tragic event in Minneapolis said that justice would be served. We’ve met with law enforcement leaders. We’ve met with African American leaders.”

Pence then went on to talk about the administration’s goals on police forms, stating that defunding the police was not going to happen. He also made a point to note that in discussing the concerns of the black community when it came to policing, that America didn’t have to pick sides. He stated that we could support law enforcement and African American communities at the same time by way of passing responsible reforms:

I think the people of Philadelphia can be encouraged by the president’s action this week. We’re supporting law enforcement. We’re not going to defund the police, but rather, we’re going to fund new resources to law enforcement to raise the standards for the use of force for de-escalation, to make it possible to deploy personnel, social workers who can deal with challenging situations, people that are trained in dealing with homelessness, to prevent the kind of incident that we saw that take place. And we’re encouraged by the fact that Senator Tim Scott and others in the Congress are moving forward.

We really believe that our steady march on this Juneteenth toward a more perfect union that we have an opportunity. But it’s not a choice between law enforcement and our African American community. This is really a choice between supporting law enforcement and supporting and improving the lives of our African American families and our cities, and we’re committed to doing just that.

But instead of hearing the totality of Pence’s detailed answer, Taff stuck to media/left-wing talking points about uttering “Black lives matter”:

Taff: “Forgive me for pressing you on this, sir, but I will note you did not say those words – ‘Black lives matter.’ And there is an important distinction. People are saying, ‘of course, all lives matter.’ But to say the words is an acknowledgment that Black lives also matter in a time in this country when it appears that there’s a segment of our society that doesn’t agree. So why will you not say those words?”

Pence again responded with another detailed answer in which he first noted he disagreed with the premise of Taff’s question before discussing in-depth the administration’s record on issues important to the black community:

Pence: “Well, I don’t accept the fact, Brian, that there’s a segment of American society that disagrees in the preciousness and importance of every human life.

It’s one of the reasons why as we advance important reforms in law enforcement, as we look for ways to strengthen and improve public safety in our cities, we’re not going to stop there. I mean, I couldn’t be more proud to be part of an administration that saw the lowest unemployment ever recorded for African Americans. We saw the creation of thousands of opportunity zones that are generating billions of dollars of investment to our cities. This is the administration and President Trump is the president who made permanent funding for historically Black colleges and universities. And we’ve been champions of educational choice because we believe that inner-city families, African American families ought to be able to choose where their children go to school regardless of their area code and income.

So while we acknowledge the concern of protesters, we respect the right of peaceful protesters, I must tell you that we’re absolutely determined to improve the lives of our African American citizens with more job opportunities, more educational opportunities, and this administration will remain committed to doing what we’ve been doing all along.”

Taff: “And yet, one final time, you won’t say the words, and we understand your explanation.”

“We understand your explanation”? What does that even mean? Watch their exchange below:

Judging by his Twitter feed, Taff was really proud of the attention he brought on himself, all but writing out the words “Please RT me and like me”:

Well. This night got interesting.

What this “interview” was was utterly shameful “gotcha” broadcast journalism disguised as straight-news reporting. The talking point that saying “all lives matter” is racist and unacceptable comes from the left, so naturally Taff takes it and runs with it. This is not “journalism” in any sense of the word, although I wouldn’t be surprised to find out that CNN’s resident showman “journalist” Jim Acosta was standing and applauding when he heard about it.

More than hearing the words “Black lives matter,” average Americans from all walks of life understand that talk is cheap and that saying something means nothing if your actions don’t back up your words. As was reported after the Democratic Kente cloth stunt, black Americans in particular are sick of the pandering and the political stunts and value legislative actions over empty gestures and virtue-signaling platitudes.

Pence was right not to get caught up in the word games supposedly objective reporters are trying to play on this issue. The “will he or won’t he say the words” theatrics are nothing more than a cheap divisive tactic used by Democrats and the media to keep the pot stirred at a time when cooler heads need to come to the table in order to get sensible reforms passed.

“We hold these truths to be self evident, that all men are created equal”

All men (meaning mankind, of course). We have not always lived up to the promise of those words, but there they are. Separating out “black lives” from of “all lives” does more harm than good. But of course the people behind BLM know and are counting on that.

If “black lives matter” as distinct from all lives, then the next question would logically be, do they matter more or less than everyone else’s?

All men are created equal. All lives matter.

I always tell my daughter that when you see or read an interview like this, think of three questions that the journalist or reporter didn’t ask but should have. In this case the “reporter” asked only one question three times. How often in a career does a person like this guy get to interview the VP of the United States of America! The second most powerful person in the world, and he came with only one question. Disgusting and disgraceful.

When you can come back to me and say “ALL black lives matter” and mean it, then maybe I’ll think about it. But you’re not there yet. You’re merely an agitprop bullhorn of little substance who does nothing but recite a memorized catechism without once undertaking to seriously examine it.