Suddenly confiscating guns isn’t a Democrat priority when Democrats like the people carrying the guns. 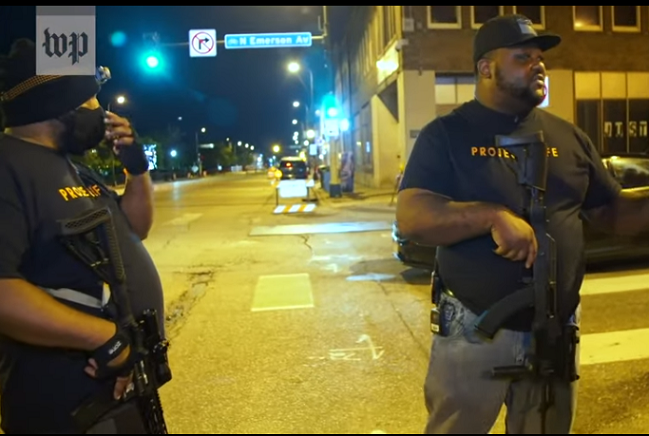 I’m so old I remember when the media would flop onto the nearest fainting couch at the sight of a protester exercising his or her Second Amendment rights.  Remember the wails of horror, fear, and outrage we were treated to when Tea Party activists and, more recently, anti-lockdown protesters were shown lawfully openly carrying perfectly lawful firearms at protests?

The headlines were intended to shock the general public, to scare people, to incite anti-gun fervor.

With regard to the last story, it was taken, you may recall, to brazen heights when MSNBC edited out the race of a gun-toting, anti-Obama racist (he was black).

This ended up being a disaster for the race-baiting, anti-Second Amendment mainstream media.  Remember how they only showed the man with his big scary gun from the neck down?

Politico reported at the time:

Several conservative bloggers, including Hot Air, RedState, and NewsBusters, have taken MSNBC to task for not identifying a man with a gun at an Obama event as an African-American in a segment that discussed the “racial overtones” of those packing heat at presidential town halls.

Following the shot of the African-American man focusing specifically on the gun, MSNBC host Contessa Brewer said that “you have a man of color in the presidency and white people showing up with guns strapped to their waists or to their legs.”

All while cropping out the man’s head, so you couldn’t see that their example of “white people showing up with guns strapped to their waists” was black.  They wanted to obscure the fact that he was a black anti-Obama protester exercising his Constitutional right to keep and bear arms in an open carry state.  Who was stoking what?  (Ace of Spades also offered up one of his seriously awesome takes on the matter at the time.)

The frenzied anti-Second Amendment fear-mongering and (we now know) phony horror at seeing armed protestors reached an even more fevered pitch earlier this year when protestors showed up in various states to protest draconian and often illogical lockdown measures.

Funny how we don’t hear any of that “great irony” talk amid the George Floyd protests/riots of 2020 and the CHAZ zone in Seattle.

This seems a moment ripe  for “gee, what exactly are tyranny and fascism?” introspection, particularly when there are hundreds of images all over social media of armed anti-police “protestors,” including those guarding CHAZ borders and now “patrolling” CHAZ streets.

And especially given that people of color have been forced to take up arms to protect their communities from these “peaceful” and “festive” arsonists, looters, and murderers.  But we hear crickets from Democrats and their media stenographers who once thought the mere sight of any long gun (commonly mistaken for an AK-57billion “weapon of war”) was cause to further restrict or even revoke one of, if not the, most prized rights of every American.

Some local media wrote glowing reports about armed protesters “protecting” the Seattle East Precinct after it was abandoned by police, but mostly these stories about guns at protests or used to protect businesses against rioters are simply ignored, or glossed over in passing, because they don’t fit the narrative.

Thankful that these business owners have a 2nd Amendment so they can protect themselves and their businesses from these violent looters. https://t.co/RfbthQgg7O

Just spoke with 2 people at #CHAZ entrances with AR-15s. They coordinate with medics & keep an eye on passing cars, people coming in, etc. They are not charging people fees to walk around. People say they feel safer with police gone & thanked this man during my intvw. pic.twitter.com/6hqxv5Bydv

Seattle’s CHAZ is being protected by armed community patrols who guard the zone’s makeshift borders and act as a deterrent for the white supremacists sending threats. I spoke with @PugetSoundJBGC about firearm safety & community defense in a cop-free zone https://t.co/PknOwcj0wu

A masked man in a car with no license plates says he is with the John Brown Gun Club. He followed the people who were chased out of #CHAZ and was communicating with others on an ear piece. pic.twitter.com/2CII33k0LR

The Washington Post, usually among the most stringent anti–gun outlets, posted a great video about armed citizens in Minneapolis protecting their neighborhoods.

What you won’t hear is any talk about gun control or about how awful it is that citizens are protecting themselves and their neighborhood from violent rioters, looters, and arsonists with big, scary-looking “weapons of war.”

Suddenly, in fact, gun control is the one subject we hear nothing about.  This is pretty surprising given that the 2020 Democrat presidential nominee hasn’t been officially named yet, and one of their very favorite candidates, Robert Francis “Beto” O’Rourke, openly admitted, “Hell yes, we are going to take your AR-15, your AK-47.”

It’s almost like Democrats and their media cohorts have another reason for trying to disarm the law abiding citizens of this country.

The riots and the hypocrisy over the thugs in Seattle with their guns is good for the country. It’s pretty much ended any talk of gun control for a few years. Maybe a few decades as people will remember this year.

People who’ve never thought of buying a gun are out there buying them.

Personally I don’t care that they’re carrying weapons. First of all because I have no plans or desire to visit CHAZ / CHOP. They can exercise their second amendment rights. That said, I do get a nice chuckle recalling that the protesters in MI who walked / stood with weapons were called “domestic terrorist” by not only my govorner but by every CNN and MSNBC talking head. Its fun to see their lack of consistency.

Don’t forget when the Bundys peacefully “occupied” a government building in the middle of desolation, the media screamed that it was “terrorism” that called for an immediate federal armed response. NEVER forget.

To be clear, I don’t have a problem with lawful open carry at all. In fact, I have long been a huge advocate of it. This post is not intended to be negative about lawful open carry (there is some question about the CHAZ warlord handing out weapons from the trunk of his Prius and the legalities of that regarding transfer, background checks, etc.), but lawful open carry? I’m a fan. That’s why I loved the Latin gangs protecting their neighborhoods and the WaPo piece on the locals protecting their businesses and neighborhoods.

Someone posted a great vid of bikers and other residents protecting their town in my post about the Latin Kings; I watched that vid and thought how safe I would feel in that town. Wouldn’t it be fun if the media gave the same coverage to lawful carry by all Americans, including those not swilling the Marxist goop they are busy ladling over America? Exposing their hypocrisy is important.

In the case of the Latin Kings “protecting” their neighborhoods, they were actually restricting other citizen’s lawful use of common roadways. They had no authority granted them by the greater community to regulate the use of these roadways, paid for by common tax funds. I have no problem with residents bearing arms and visibly monitoring the public activities in their neighborhoods. I have a big problem when someone illegally interfering in my lawful activities. If they are armed when they do it, I may have to use MY carried firearm to protect MY rights.

They did good here in south side of Chicago. They knew who to watch. They knew who burned their own neighborhood (2 Walgreens and grocery store) and were looking for more loot in fresh pickings.

if the header photo of this article is at all indicative of the ” protesters ” who’ve appointed themselves the police force/guard for this nonsense then they’re obviously outright street thugs–look at how they are holding their weapons–lord, could take their weapons(or waste them) before they could get off a shot–a child could probably do it

and the police are afraid of inciting these idiots?

This post becomes even more significant when read in conjunction with an email I received from a friend a couple of days ago:

“There is a guy Efrain, in my Men’s group at church who emigrated from Venezuela. We heard his story tonight. The activities that the country underwent prior to instituting the dictatorship is what is attempting to be followed here, now. They turned the population against the police, replacing it with vigilantes that the government could control. They released prisoners, then armed them, and they became a new type of policing force called enforcer squads, in local neighborhoods. What he is seeing now is what is being attempted now.”