“A whopping 500,000 users [including Legal Insurrection] signed up for social-media platform Parler after Twitter shut down two conservative accounts this week” 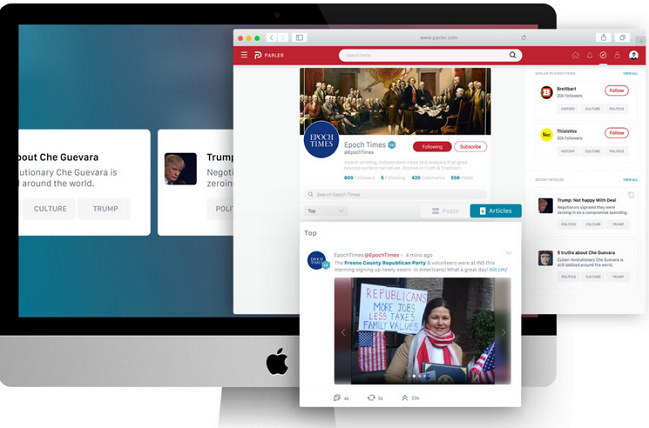 There have been many attempts to create a Twitter alternative, but in the wake of Twitter’s decision to censor a tweet by President Trump and its permanent bans on prominent right-leaning accounts like that of meme master CarpeDonktum, Parler is attracting users at a startling rate.

So startling is the growth of Parler, a free speech-friendly Twitter alternative, that the leftstream and #NeverTrump media are attempting to vilify it as the refuge of racists and white supremacists and fascists. Oh my!

The headlines are hilarious:

Over the course of only a few days, Parler gained a whopping 500k new users, so the pearl-clutching on the left is, for once, warranted.

A whopping 500,000 users signed up for social-media platform Parler after Twitter shut down two conservative accounts this week, according to user metrics obtained by Mediaite.

The surge brings the two-year-old platform’s total number of users to 1.5 million, according to data provided by the company, an increase of 50 percent. The company, co-founded in 2018 by John Matze and Jared Thomson, bills itself as a “non-biased free speech” alternative to Twitter that applies broadcast standards to content its users publish — meaning it doesn’t censor political speech, but does prohibit certain content, such as hardcore pornography, that Twitter permits.

The development comes after Twitter on Tuesday banned Carpe Donktum, a well-known meme creator whose content is often shared by President Donald Trump, and locked an account belonging to National Pulse editor Raheem Kassam. Those actions sparked outcry from conservatives who encouraged users to join Parler, including Sen. Ted Cruz (R-TX), who on Thursday said he had joined the platform because it “gets what free speech is all about.”

The goal of Big Tech was to silence or mute conservative voices via shadow banning and removing the accounts of those who didn’t have a means of or a platform for fighting back.  They want us tweeting into the abyss, thinking we are reaching people while they have ensured that we are not.

They want to silence us, not move us to a platform where we can organize, coordinate, and share information.  That, I think, is their worst nightmare writ large, and that is precisely why the leftstream and #NeverTrump media are spitting venom at Parler.

I’m proud to join @parler_app — a platform gets what free speech is all about — and I’m excited to be a part of it. Let’s speak. Let’s speak freely. And let’s end the Silicon Valley censorship. Follow me there @tedcruz! pic.twitter.com/pzUFvhipBZ

Despite their hyperbolic hysteria, Parler is home to a huge number of conservatives, not just the banned and KKK.

Jim Jordan, Elise Stefanik and Nikki Haley all have something in common, other than a strong affection towards President Trump.

The three Republican politicians joined social media app Parler this week, adding their profiles to a site that’s emerged as the new digital stomping ground for anti-Twitter conservatives. Sen. Ted Cruz of Texas arrived earlier this month and Rep. Devin Nunes of California started in February, while Sen. Rand Paul of Kentucky has been a member since 2018, the year the app launched.

. . . . The catalyst for the latest growth surge was a story from The Wall Street Journal on Wednesday, which said that the Trump administration was looking for alternatives to Facebook and Twitter over concern that more content is going to be blocked as the election campaign heats up. The Journal named Parler as a possible alternative.

Two days later, Parler was the top-ranked iPhone app in the news category, ahead of Twitter and Reddit, and 24th overall, just behind Venmo and WhatsApp, according to App Annie. User growth surged to 1.5 million from 1 million over the course of about a week, said John Matze, Parler’s 27-year-old founder and CEO.

Indeed, there are a large number of conservative voices on Parler that we all know and love, including Legal Insurrection!

I have joined #Parler and can be found there at @fuzislippers If you jump over, be sure to look me up and say "hi"! #MAGA #KAG #WomenForTrump

Our very own Katya and Stacey are there, too!

While the site is currently attracting a lot of conservatives and there’s a report that the Parler CEO is hoping more lefties join, I’ve been there only two days and have already received an awesome parley from a leftie troll:

Don’t you just love every. single. word? From the condescending “darling” right through to the leftie who loves feels over facts admonishing me not to “let the facts get in your way.”  Leftie trolls are pure giggle.  I can’t get enough of them, and I suspect that we will be seeing a lot more of them as the right moves to Parler.  They won’t be able to help themselves.

If President Trump makes the plunge . . . forget about it.  Twitter is toast.  Every single leftie from the Democrat media stenographers to every Democrat and leftie loon will have to follow. Or be left behind in their own leftie safe space, a left-wing echo chamber the right abandoned them to due to their own hubris in silencing our voices.  Seems fitting somehow, doesn’t it?

The question is how long until Parler’s web host (Amazon), payment processor (or if they don’t, MasterCard and Visa), domain registrar, and DNS provider act to shut them down.

Those with some pull in Parler need to get them to change this term of service. Copied today from the site.

14. You agree to defend and indemnify Parler, as well as any of its officers, directors, employees, and agents, from and against any and all claims, actions, damages, obligations, losses, liabilities, costs or debt, and expenses (including but not limited to all attorneys fees) arising from or relating to your access to and use of the Services. Parler will have the right to conduct its own defense, at your expense, in any action or proceeding covered by this indemnity.

Not a lawyer so not legal advise, but it looks like you are leaving yourself burnable to a huge legal bill beyond your own if you get sued. Twitter has a long terms of service and I may have missed it, but I could not find a similar item there. Saying they will not help you and are not liable for you content is standard, but that you have to pay their bills for a third party action seems unusual for this type of site.

I intend to try Parler some time this week, and I hope it works out. I joined Twitter when it first started, but never used it for much. In the early days it was for things like “Going to lunch now; will be at Mike’s diner if anyone’s around”. I missed the whole transition to what amounts to a blog for really tiny posts. I finally cancelled my account when they signed up Kim Sarkeesian to be their censor. They use the number of accounts they host as a marketing tool, and I didn’t want to contribute to their bottom line, even by a fraction of a penny.

I tried gab.ai about a year ago, but lasted about five minutes there. Literally the very first thing I saw when I signed in was a bunch of really nasty neo-nazi stuff, and I immediately decided this was not a place for me.

I hope parler turns out to be a decent place, because maybe that will finally get people to stop bitching about Twitter and just leave them. Twitter has the first amendment right to pull the crap it does. Like Voltaire and Beatrice Hall I will defend that right against anyone who calls for the government to shut it down, whether it’s the President or ignorant commenters on blogs. But it doesn’t deserve to stay in business, and it definitely doesn’t deserve our help to stay in business. Let it become the lefty echo chamber it wants to be. If the President moves then people will follow him.

I joined Parler, but don’t use it because I really can’t stand the incessant negativity found on social media sites in general. I’ve been a much happier person since I ditched Facebook three years ago, and Instagram one year ago. Never saw the attraction to Twitter (worse than Instagram by far, IG was usually pretty bad).

Just tried to sign up. Several times. I get trapped in the screen following he captcha hurdle where it just keeps cranking and cranking until it dumps me. I hope it’s because they are overwhelmed with people signing up.

I don’t tweet and won’t be but I want to beef up their subscription stats.