Judge Emmet Sullivan to Appeals Ct in Flynn Case: It’s Premature To Order Me To Dismiss The Case

Judge Emmet Sullivan to Appeals Ct in Flynn Case: It’s Premature To Order Me To Dismiss The Case 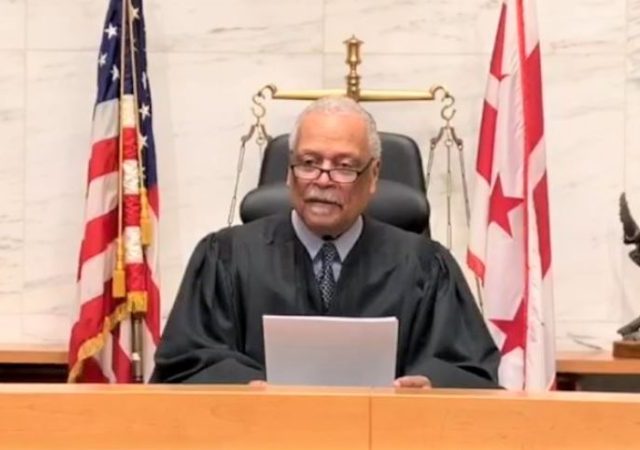 The last we checked in on the Michael Flynn court proceedings, The Appeals Court Orders Judge Emmet Sullivan To Explain His Actions In Michael Flynn Case:

Michael Flynn has asked the Court of Appeals for the D.C. Circuit to order the district court to dismiss the criminal prosecution as requested by the government, and to remove Judge Emmet Sullivan from the case.

Instead of dismissing the case, Sullivan appointed former Judge John Gleeson, who has a documented hostility to Flynn, to argue as ‘friend of the court’ against dismissal and also as to whether Flynn should be held in criminal contempt of court for perjury (presumably for pleading guilty then later denying guilt)….

The D.C. Circuit has issued an order (pdf.) which is as unusual as Sullivan’s own conduct. The appeals court order Sullivan to explain what he is doing….

For background on the Petition for Mandamus filed by Flynn in the appeals court and prior proceedings, see these prior posts:

Yesterday both the Department of Justice and Judge Sullivan filed Briefs, and both addressed the issue.

The Brief for USA supports the request that the Court of Appeals order the case dismissed, and was signed by the Solicitor General:

The Constitution vests in the Executive Branch the power to decide when—and when not—to prosecute potential crimes. Exercising that Article II power here, the Executive filed a motion to dismiss the indictment, and petitioner consented. Despite that exercise of prosecutorial discretion, and the lack of any remaining Article III controversy between the parties, the district court failed to grant the motion and bring the case to a close. It instead appointed an amicus curiae to argue against dismissal and to consider additional criminal charges.

This Court should issue a writ of mandamus compelling dismissal. Federal Rule of Criminal Procedure 48(a) provides that “[t]he government may, with leave of court, dismiss an indictment.” That language does not authorize a court to stand in the way of a dismissal the defendant does not oppose, and any other reading of the Rule would violate both Article II and Article III. Nor, under the circumstances of this case, may the district court assume the role of prosecutor and initiate criminal charges of its own. Instead of inviting further proceedings, the court should have granted the government’s motion to dismiss. And given the court’s infringement on the Executive’s performance of its constitutional duties, a writ of mandamus is appropriate, as this Court held in similar circumstances in United States v. Fokker Services B.V., 818 F.3d 733 (D.C. Cir. 2016).

Here is the section on whether Mandamus is premature:

The only distinction between the cases is that, in Fokker and In re United States, the district court had entered an order denying the motion, while here the district court has entered an order providing for further proceedings and contemplating additional, court-initiated criminal charges. That distinction makes no legal difference. This Court has emphasized the “settled constitutional understandings under which authority over criminal charging decisions resides fundamentally with the Executive, without the involvement of—and without oversight power in—the Judiciary.” Fokker, 818 F.3d at 741 (emphasis added). Courts have “no power” under Rule 48(a) “to scrutinize and countermand the prosecution’s exercise of its traditional authority over charging and enforcement decisions.” Id. at 742-743 (emphasis added). Indeed, the threat of intrusive judicial proceedings and criminal charges—and potentially even evidentiary proceedings if the court-appointed amicus has his way—only makes the separation-of-powers problem worse. The district court plans to subject the Executive’s enforcement decision to extensive judicial inquiry, scrutiny, oversight, and involvement. Under the Supreme Court’s and this Court’s precedents, it is clear and indisputable that the district court has no authority to embark on that course.

In his own Brief, represented by attorney Beth Wilkinson, Judge Sullivan focused heavily on the timing. Here are excerpts from the Brief for Sullivan:

The unique facts of this case warrant evaluation by the trial judge before any review by this Court.

It is unusual for a criminal defendant to claim innocence and move to withdraw his guilty plea after repeatedly swearing under oath that he commit-ted the crime. It is unprecedented for an Acting U.S. Attorney to contradict the solemn representations that career prosecutors made time and again, and undermine the district court’s legal and factual findings, in moving on his own to dismiss the charge years after two different federal judges accepted the defendant’s plea.

There is no basis for “directing the district court to grant” the government’s motion to dismiss (Pet. 1) before the district court has considered and decided it. Mandamus is an inappropriate vehicle for resolving a pending motion….

These settled principles resolve Mr. Flynn’s petition. Judge Sullivan has not ruled on the government’s motion to dismiss or any issues regarding contempt. If either issue is resolved unfavorably for Mr. Flynn, he can pursue review in this Court. See, e.g., United States v. Hamm, 659 F.2d 624, 625 (5th Cir. Unit A Oct. 1981) (en banc) (reversing district court’s Rule 48 ruling after judgment). And if such circumstances arise, this Court will be better equipped to evaluate the issues with the benefit of any determinations Judge Sullivan may make.

The fact that Judge Sullivan has decided nothing yet distinguishes this Court’s decision to grant mandamus in Fokker…. Because no decision has been made here, Mr. Flynn does not face any comparable harm. Indeed, his petition largely elides the “no other adequate means” criterion. See Pet. 27–28. To the extent Mr. Flynn, who has been released on his own recognizance throughout the proceedings, Dkt. 5, claims harm from the pendency of his criminal case, that does not suffice….

Mr. Flynn likewise errs in seeking mandamus on the basis that further proceedings in the district court “will subject [DOJ] to sustained assaults on its integrity.” Pet. 28. Judge Sullivan has not disparaged DOJ’s integrity in any way. And although the government has attacked the investigation of Mr. Flynn, it has not asserted any misconduct by the career prosecutors who pre-viously oversaw the case. In any event, given the serious allegations in Mr. Flynn’s most recent sworn statement, further proceedings in the district court will ensure the integrity of the judicial process and serve the public interest.

I think the prematurity issue is serious, and if Flynn loses on the Mandamus petition, that will be the ground. That said, what Judge Sullivan has done is so unusual in a criminal prosecution context, I don’t see Judge Sullivan ultimately winning on that.

The Appellate Court could order Sullivan to recind his order appointing amicus curie by 4:00 pm Thursday because there is no legal basis for entering such an order. If he refuses to withdraw that order he’s in contempt of court and it’s sufficient insubordination to ask the chief judge of the DC District court to appoint a new judge in the matter. The Circuit justices could also ask the DC Chief to look into the extreme prejudice shown by Sullivan toward Flynn and remove him from the case. It’s quite clear by now that Sullivan is a racist who hated white defendants.

I disagree that it was premature. The DOJ dropped the charges, the defendant agreed, there is nothing remaining for Sullivan to do but sign off on that.

Instead, Sullivan contrived a pile of bullshit. Now, stupid oral arguments and amicus too by the Circuit Court’s order.

Most of a week late, but…

Normally, Sullivan might have an argument that the petition for mandamus was premature. But one distinction here is that, ignoring a couple of small exceptions, not relevant here, federal courts have very limited jurisdiction. Most notably, ignoring those few exceptions, they are limited to Cases and Controversies. With the Defense joining the United States here, agreeing to dismiss the charge, there is no longer a Case or Controversy, and Sullivan, thus, no longer has jurisdiction under Article III of the Constitution.

My expectation is that the Writ of Mandamus will be issued by this panel. Republican nominated judges outnumber Democrat nominated by 2-1 on the panel, with the newest being a Trump nominee, an Asian female likely on the short list for the Supreme Court.

The provision in the rules that provide a district court judge any discretion in approving motions to dismiss by the government was implemented to protect defendants from malicious dismissals and refilings of cases by prosecutors. This is inapplicable here, since the Defendant agrees with the dismissal AND it is a dismissal with prejudice, meaning that the government couldn’t legally refile the case, even if they wanted to (and, of course, they don’t)

Another thing to keep in mind, the top two names on the government’s brief are those of the Solicitor General and the US Attorney for DC. Not their assistants or lower level attorneys. They are speaking for the DOJ, as AUSA Brandon Van Grack (removed lead Mueller prosecutor on the case) could never do. Their brief makes clear that the DOJ considers this a serious Separation of Powers issue (attempted appropriation of a core Article II power of the Executive by an Article III judge). I think that the addition of the SG on the brief says to the panel that the next step is SCOTUS, if they don’t win here. Give the choice of deciding the case on Article III jurisdiction, or Article II vs Article III Separation of Powers, I think the easy response is to issue the Writ based on jurisdiction – plus, of course, they can just cite their previous cases as controlling.