Even the Associated Press called out the photo! 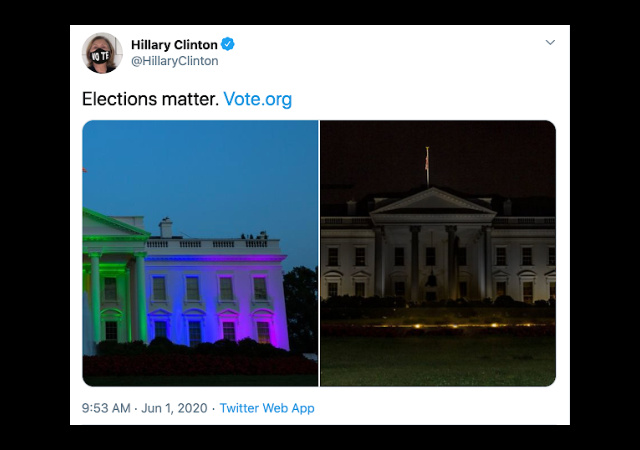 Instead of showing support for the gay community, Democrats and the left circulated a photo of a darkened White House to show that Trump doesn’t care about the riots going on and Pride Month.

The photo this year is from 2015 and was darkened. Even the Associated Press called out the photo.

The Associated Press fact-check confirmed that photos of the White House taken on Sunday night showed it “illuminated by exterior lights and the portico lantern turned on, but the mansion’s interior is dark.”

The article then said one could find the original photo on Getty Image’s stock website. This photo shows “the lantern hanging in the White House portico is lit, along with several lights that surround the fountain in the front lawn.”

One other thing: someone uploaded the photo in 2015.

So not only did they use a photo from 2015, but they used a photo deliberately darkened to slam Trump.

There is maybe no better metaphor for Trump’s weakness than the White House going dark during a national crisis and Trump hiding in a bunker.

It is a perfect encapsulation of who he is: a terrified little man pretending to be strong to the detriment of the entire world.

The dark White House with the lights out is a perfect representation of this presidency for a variety of reasons pic.twitter.com/gl8za9L88D

I have never seen this in my entire life. I lived in DC and worked at a restaurant two blocks from here and rode my bike by the White House every night at around 2am. The lights were always on. This absolutely sums up this administration. Nobody’s home. https://t.co/Uk2rhxE1Wj pic.twitter.com/ACjZtaaRPR

Will they apologize and delete?

So will Hillary Clinton delete this deceptive viral tweet since it has been proven that the dark image of the White House on the right is both (1) photoshopped to make it darker than it really was ***and*** (2) is a picture from 2015?https://t.co/UzD0u0h9VZ https://t.co/70aFkuPE9F

Something tells me no. They’ll shrug their shoulders and say something like, “Doesn’t matter. Point still stands.”

Oh wait. They did.

I posted a picture of the White House “going dark” that appears to have been shopped. Apologies, and deleted. Doesn’t change fact that it happened. So, here’s a Reuters photo. #BunkerDon pic.twitter.com/vFXUVEpkdW