One man appeared in court today, but “was released on his own personal recognizance.” 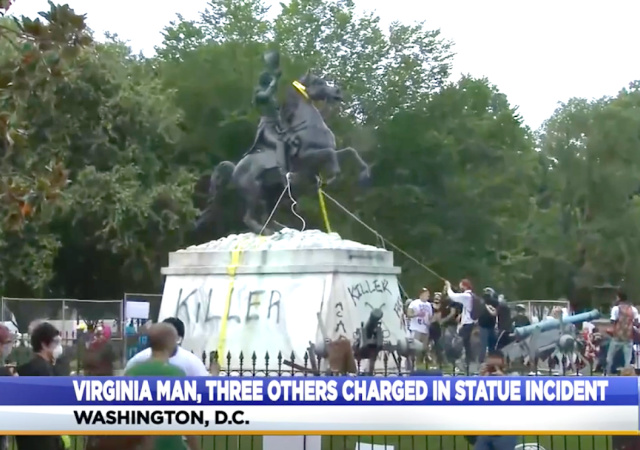 The Department of Justice announced charges against four men for allegedly trying to tear down the Andrew Jackson statue near the White House.

From the DOJ press release:

Judd appeared in court on Monday. The 20-year-old attends George Washington University and is a member of the Sigma Nu fraternity.

Judd did not say anything during his court appearance. He “was released on his own personal recognizance.” He has “to stay away from 13 different monuments.”

#FBIWFO & @usparkpolicepio are seeking to identify several individuals who are responsible for vandalizing federal property at Lafayette Square on June 22, 2020. If you have info, please call #FBI. https://t.co/oGsDaPweqC pic.twitter.com/mOpjK7EpS5

When protestors cross the line which includes acts of sedition and/or disrupting the lives of other innocent people, blocking their movement, violent acts, or stopping them from accomplishing their jobs or purpose, blocking their speech, and/or unnecessarily interfering with the activities of their environment, or smear tactics, then they are violating their Constitutional rights, 1st amendment rights, breaking existing laws, and need to be brought to justice. Protesting has its limits and place. These protests are not spontaneous and are organized activities by outside domestic terrorist groups. Many are paid by George Soros, BLM, Antifa, and related extreme liberal groups ( Obama). Those who incite and/or fund riots/looting/arson (George Soros) need to be arrested for being an accomplice and/or sedition. They need to account and pay for the damage they create including costs created by obfuscation. Rioters and looters/arsonists should be placed on notice that they can/will be shot! Likewise any rioter/looter/arsonist arrested who lives outside of the immediate area does not have a “dog in the fight” and deserves an additional citation for being a paid rioter/looter and face felony charges. It is a federal crime to cross state lines or to use interstate facilities to incite or participate in violent rioting. Those rioters/arsonists arrested need to have a criminal/outstanding warrant background check, students need to be expelled, and all face loss of any government subsistence. Unmasking and disarming protestors of weapons should be enforced and Mayors, governors, government officials allowing out of control riots or preventing the police from doing their jobs should be arrested and held accountable.
I hate the probable fact that the real issue is we have a segment of our society that feels destroying other people’s lives when they face adversity is justified.
These are the inevitable consequences when a nation forgets who and what it is and when some of its citizens reject the values that built and sustained it. But tearing things down, including history, does not help others rise. No life is improved, no family stabilized.
“Out of many, one” is our national motto. We seem to be practicing it today about as much as the unofficial one, “In God we trust.”

Cutting him loose will really teach this little commie bastard a lesson, huh?