The Associated Press: “Europe could have its free travel zone up and running again by the end of this month.” 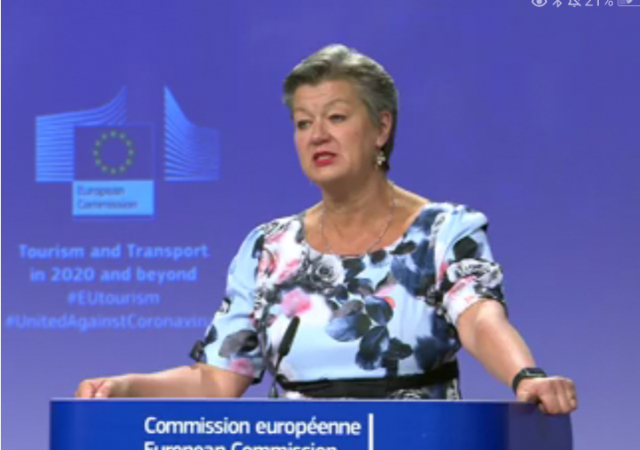 The European Union wants to lift the Europe-wide coronavirus travel restrictions to by the end of June, EU Home Affairs Commissioner Ylva Johansson said on Friday. “I think we’re coming very close to a situation where we should lift all the internal border restrictions and border checks,” Johansson told a French broadcaster.

The majority of the 26 EU member states have agreed to lift the travel ban by June 15, but some might take until the end of the month to do so, she said. Switzerland, a major tourist destination, also plans to phase out all coronavirus travel restrictions with the EU and the United Kingdom by mid-June, the news website SwissInfo reported.

Germany has already announced the lifting of the two month-long travel ban for 29 European countries set to come into effect on June 15. “The easing of travel restrictions applies to passport-free Schengen-area countries as well as the UK and will apply from June 15,” the German public roadcaster Deutsche Welle reported on Wednesday. The general travel warning will be replaced by “advice for individual countries,” the German Foreign Ministry said earlier this week.

Europe could have its free travel zone up and running again by the end of this month, but travelers from further afield will not be allowed in before July, a European Union commissioner said Friday after talks among the bloc’s interior ministers. (…)

“I personally believe that we will return to a full functioning of the Schengen area and freedom of movement of citizens no later than the end of the month of June,” European Union Home Affairs Commissioner Ylva Johansson said Friday after the video-conference meeting.

All but essential travel into Europe from the outside is restricted until June 15, but many ministers suggested Friday that they want this deadline extended until early July.

The meeting came as the Czech Republic was easing restrictions with some of its neighbors; Austria, Germany and Hungary. Also Friday, Switzerland said it plans to lift restrictions on travel from EU nations and Britain on June 15. Switzerland is not an EU member but is part of the Schengen travel zone.

The move by the EU is aimed at kick starting the continent’s ailing tourism sectors. “EU pledges to lift internal border controls by end of month,” British daily the Guardian reported. “The news will allow millions of Europeans to make summer holiday plans in a boost the hard-hit tourism industry.”

Tourism is a big source of employment and government revenue for Europe, bringing in close to 150 billion euros every season between June and August, the official EU estimates show. The European hotel and travel industry have been devastated by the Wuhan coronavirus pandemic. The sector may lose some 6.4 million jobs as hotels and restaurants across Europe report a 50 percent shortfall in revenue, EU officials fear.

The easing of coronavirus-imposed restrictions come amid huge protests across Europe. Last months, thousands come out in Germany and the UK to protest the lockdown measures. The Europe-wide lockdown restrictions came into effect in March, after Italy and Spain reported a huge surge in the numbers of cases of Wuhan coronavirus. Between December and early June, Europe recorded around 2.2 million cases of the virus, with 177,828 reported deaths.

Now that America has been neutered, Europe is being allowes to open.

Our America is gone, folks. We let the cancer grow too long and too large. We have to preserve what we have left. It may require splitting up the nation. But it beats slavery.