My appearance on Laura Ingraham show: It’s “almost a totalitarian type of mentality” 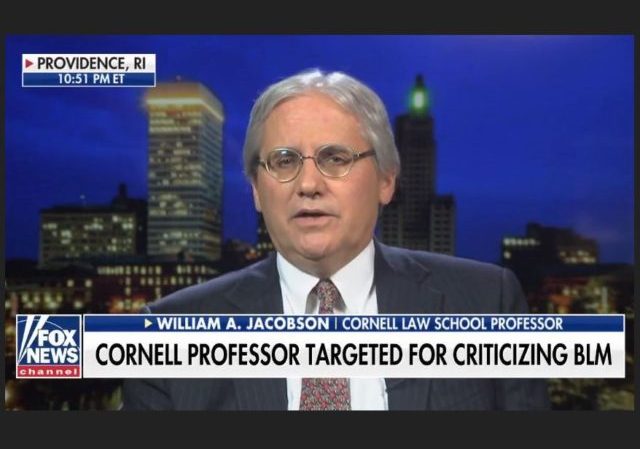 I appeared last night on the Laura Ingraham show to talk about my post, There’s an effort to get me fired at Cornell for criticizing the Black Lives Matter Movement.

Much of the conversation turned on a Statement issued late yesterday afternoon by Cornell Law School Dean Eduardo M. Peñalver defending my academic freedom and stating that no disciplinary action would be taken, but otherwise condemning me.

… rather than being unqualified attacks on all “protesters for racial justice,” the posts read to me as quite clearly a narrow and specific attack on the funders, founders, and leaders for the organized Black Lives Matter movement, and on what Jacobson sees as the radical and dishonestly-presented goals of the movement itself. He sees their agenda as a laundry list of far-left, anti-American and anti-capitalist goals at best very tangentially related to racial justice. I reread the posts several times, and I don’t see any attack, much less a categorical one, on the average peaceful protester who isn’t affiliated with the formal Black Lives Matter movement and has just attended protests to express concern about racism or police violence.

Bernstein also points out the impropriety of expressing an institutional opinion when it comes to faculty statements covered by academic freedom:

The good news is that he writes that the “unwavering commitment to these [academic] values means that all Cornell Law professors must be able to write and speak freely,” and that “to take disciplinary action against [Jacobson] … would corrode our ability to operate as an academic institution.”

The bad news is that Peñalver should have stopped there (but did not), as there is really nothing more to say as dean as representative of the law school about opinions expressed by faculty members (something I agree with Brian Leiter about!) …

Bernstein expanded on that concept in the comment section:

A non-religiously-affiliated law school is not supposed to have a “point of view” on any matter of public concern not directly related to the operation of the law school. (Which does not include BLM or social justice.)

This may be the only time I quote Leiter favorably:

Individual faculty are free to exercise their speech rights to criticize [colleagues who say controversial things], but the institution, for whom the Dean speaks, should remain silent. Here is how the University of Chicago’s 1967 Kalven Report (authored by famed First Amendment scholar Harry Kalven) puts it:

The mission of the university is the discovery, improvement, and dissemination of knowledge. Its domain of inquiry and scrutiny includes all aspects and all values of society. A university faithful to its mission will provide enduring challenges to social values, policies, practices, and institutions. By design and effect, it is the institution which creates discontent with the existing social arrangements and proposes new ones. In brief, a good university, like Socrates, will be upsetting.

The instrument of dissent and criticism is the individual faculty member or the individual student. The university is the home and sponsor of critics; it is not itself the critic…..To perform its mission in the society, a university must sustain an extraordinary environment of freedom of inquiry, and maintain an independence from political fashions, passions, and pressures. A university, if it is to be true to its faith in intellectual inquiry, must embrace, be hospitable to, and encourage the widest diversity of views within its own community….

Since the university is a community only for these limited and distinctive purposes, it is a community which cannot take collective action on the issues of the day without endangering the conditions for its existence and effectiveness.

… As dean, speaking for the law school as an entity, no. Because as dean he’s not expressing his personal opinion, he’s expressing an opinion on behalf of the law school, and law schools, as places of academic inquiry, are not supposed to have official opinions on political matters.

I made similar points in my interview, as did Ingraham. I added the point that the institutional singling out of a professor for criticism, at least at Cornell, only takes place with regard to a non-liberal professor:

WAJ: That statement by the Dean is falsely characteriz[ing] what I wrote. I did not cast aspersions on people, peacefully protesting. I cast aspersions on the violence and the looting and the tearing down of society. That’s what I was talking about. I think anybody reading my posts would fairly come to that conclusion.

But there’s a bigger point here we have on our campus faculty who say the craziest, most offensive things from a left wing perspective, they never get called out. They never have their Deans issue statements. It’s only the one conservative in the law school, me, who gets singled out and it’s almost like an attempted public shaming. It’s what happened during the cultural revolution in China, that if there’s a professor who has wrongthink you hold him out, you ostracize him, and you criticize him to the community.

That is a statement the Dean should have said, “he has the academic freedom to write whatever he wants, period ,.,

WAJ: … because that’s what they do for everybody else.

INGRAHAM: … So you’re used to being in the minority on college campuses. But what about this level of vitriol?

WAJ: I’ve never seen this. I mean, this is so far beyond political correctness, this is almost a totalitarian type of mentality, that everything you say and everything you do is watched. And if you don’t toe the party line completely you’re ostracized and you’re attacked. And that’s exactly what happened here.

I simply told a couple of truths about the foundations of the Black Lives Matter Movement. It was founded based upon the claim that Michael Brown was shot by police while he had his hands up and he was saying, ‘don’t shoot’. And every day now during the protests, people are walking around saying ‘hands up, don’t shoot,’ but that’s a complete fabrication. It’s not a fabrication because I say it’s a fabrication, it’s a fabrication because after an exhaustive investigation by the Obama-Eric Holder Justice Department, they found that that never actually happened. That was concocted by the founders of the Black Lives Matter movement to portray police as brutal killers of Black people. And it has been the ethos that has carried on forever. And that’s why we see calls to defund and deconstruct the police. But it’s based on a fabricated tale that gave rise to this movement.

INGRAHAM: Professor, I have to ask you because I went to Dartmouth college during the eighties and there was just the beginning of the political correctness movement that we were exposing in our college newspaper. But are there any liberals in the traditional sense, still on campus who say, look, I don’t agree with you bill, but you know, you have a right to speak out. It’s ridiculous. What’s happening to the country. Are there any of those left? Are they all gone?

WAJ: Well, a lot of them are left, but they always speak very quietly. They talk to you in hushed tones and behind closed doors. It’s a very repressive atmosphere on all campuses…. It used to be, if you kept your head down and minded your own business, you could kind of escape the crowd. That’s not true anymore. I mean the, the Cornell student group that’s been coming after me has on their Facebook page. ‘Silence is Violence’ right now. This is completely crazy.

The Professor is an actual Conservative who steadfastly stands for truth and free speech; he hardly needs support from white nationalists like Herr Drumpf and doesn’t deserve the ridiculous, politically correct ad hominem attacks of the neo-Stalinist twits.

And O’Balmy has been revealed as an Islamist supremacist anti-Semite.