“I am being serious here” 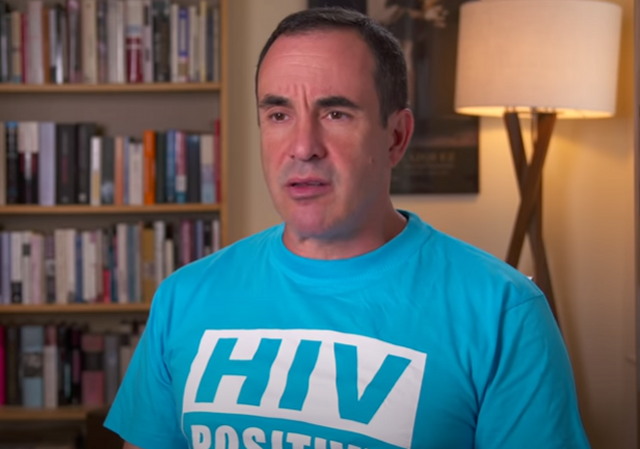 Dr. Gregg Gonsalves is a professor of epidemiology at Yale University. He recently suggested on social media that Trump’s response to the Coronavirus pandemic is “close to genocide.”

This is Alex Jones level rhetoric, coming from an Ivy League professor.

“I Am Being Serious Here”: Yale Professor Denounces Trump For “Genocide” In Response To The Pandemic

In the last three years, various experts have made what they called dispositive cases for crimes by President Donald Trump ranging from hate crimes to treason to inciting violence. Now Yale University Professor of Epidemiology Dr. Gregg Gonsalves is adding genocide.

Gonsalves is upset with what he views as the “delayed” response by the Trump Administration to the pandemic. That is certainly a legitimate viewpoint that is shared by many and people of good faith can disagree on when the Administration should have acted. However Gonsalves insists that such a failure to respond a couple weeks earlier is “awfully close to genocide.”

It is is neither genocide nor close to genocide, but Gonsalves later doubled down to make sure that people understood that this is not just hyperbole but he was “being serious here.” He further suggests that this genocidal strategy could be tied to killing minority voters before the election. Gonsalves has appeared widely as an expert in coverage by CNN, NBC, Politico, Foreign Policy magazine, The Washington Post, and other media outlets.

See the screen-capped tweets below: 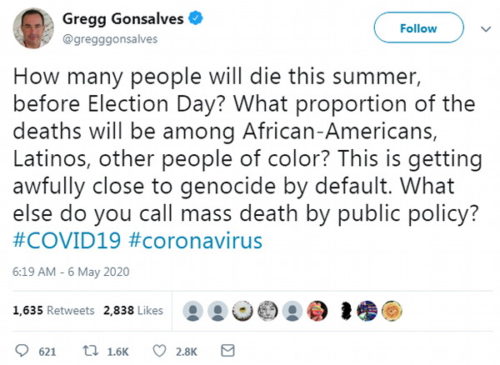 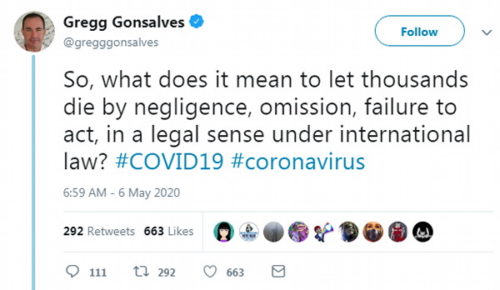 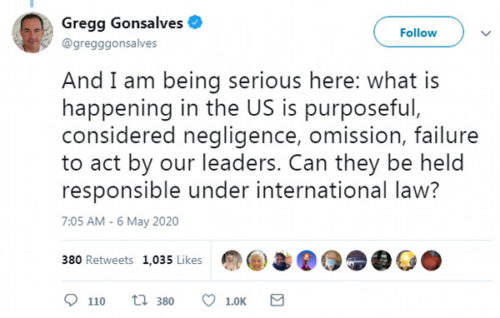 While doing research for this post, I found the video below. Professor Gonsalves is apparently a 2018 Fellow of the MacArthur Foundation. In this video, he clearly indicates that he considers himself as much an activist as an academic.

He also makes more than one reference to his commitment to social justice and states that one of his goals is to influence politicians and policy makers. Take a look:

He says he’s being serious, but its just another case of TDS.

The proudly worn T-Shirt says it all.

Saying “I’m serious” doesn’t make it so and obliges nobody to actually take you seriously.

I wonder if Bandy Lee has any analysis on his psyche.

Gregg Gonsalves, HIV positive in the mid 90’s, didn’t use protective devices then and failed but he wants to lecture others about Kung Flu? Sorry but he doesn’t have good enough credentials to lecture anybody about anything healthcare related – he failed at that back in the 90’s.