Wuhan Virus Watch: The Walls Are Closing In on Andrew Cuomo

Wuhan Virus Watch: The Walls Are Closing In on Andrew Cuomo

“Under no circumstances should a hospital discharge a patient to a nursing home that’s not prepared to take care of those patients’ needs. The federal guidelines are absolutely clear about this.” 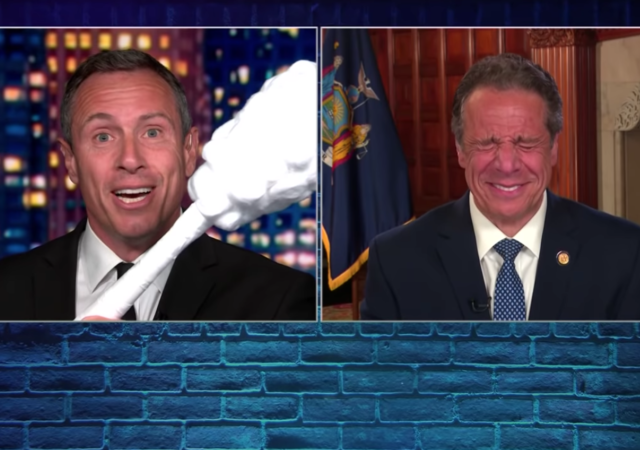 New York Democratic Gov. Andrew Cuomo is trying so hard to deflect blame away from him after so many elderly people died in nursing homes from the Wuhan coronavirus.

Cuomo claimed he did this because of a March 13 order from CMS, which said the homes (emphasis mine) “should admit any individuals they normally admit to their facility, including individuals from hospitals where a case of COVID-19 was/is present.”

Look at what I emphasized. It said if coronavirus existed in the hospital.

“Under no circumstances should a hospital discharge a patient to a nursing home that’s not prepared to take care of those patients’ needs,” Verma said on Fox News Radio. “The federal guidelines are absolutely clear about this.”

Verma said she disagreed with Cuomo’s interpretation of federal guidance, noting that the CMS order also stated that nursing homes should only accept coronavirus-positive patients as long as they can follow certain precautions spelled out by the Centers for Disease Control and Prevention.

“Yes, the nursing homes will have COVID positive people … if they are prepared to handle the unique needs of that patient,” Verma said. “Anytime you discharge a patent from the hospital it is the responsibility of the hospital to make sure that the patient is safe when they discharge them.”

A study by Lancet “found Covid-19 patients who received the malaria drug were dying at higher rates and experiencing more heart-related complications than other virus patients.”

So WHO decided to halt the trials.

The study included data from Australia: Five hospitals, which recorded 600 patients and 73 deaths as of April 21.

But data from Johns Hopkins University shows only 67 deaths from Covid-19 had been recorded in Australia by 21 April. The number did not rise to 73 until 23 April. The data relied upon by researchers to draw their conclusions in the Lancet is not readily available in Australian clinical databases, leading many to ask where it came from.

The federal health department confirmed to Guardian Australia that the data collected on notifications of Covid-19 in the National Notifiable Diseases Surveillance System was not the source for informing the trial.

Guardian Australia also contacted the health departments of Australia’s two most populous states, New South Wales and Victoria, which have had by far the largest number of Covid-19 infections between them. Of the Australian deaths reported by 21 April, 14 were in Victoria and 26 in NSW.

Victoria’s department confirmed the study’s results relating to the Australian data did not reconcile with the state’s coronavirus data, including hospital admissions and deaths. The NSW Department of Health also confirmed it did not provide the researchers with the data for its databases.

Or does it?! Because:

Dr Allen Cheng, an epidemiologist and infectious disease doctor with Alfred Health in Melbourne, said the Australian hospitals involved in the study should be named. He said he had never heard of Surgisphere, and no one from his hospital, The Alfred, had provided Surgisphere with data.

“Usually to submit to a database like Surgisphere you need ethics approval, and someone from the hospital will be involved in that process to get it to a database,” he said. He said the dataset should be made public, or at least open to an independent statistical reviewer.

“If they got this wrong, what else could be wrong?” Cheng said. It was also a “red flag” to him that the paper listed only four authors.

“Usually with studies that report on findings from thousands of patients, you would see a large list of authors on the paper,” he said. “Multiple sources are needed to collect and analyse the data for large studies and you usually see that acknowledged in the list of authors.”

Cheng said it still could mean that the results are the same. But these studies should be firm and accurate.

Shocker: 42% of the Coronavirus Deaths Came From 0.6% of the Population

I have three autoimmune disorders: rheumatoid arthritis, Sjogren’s, and lupus. You would think I’m panicking, right? Well, I’m not and it’s not just because I swear I had the Rona in January.

The fact is, even with my almost non-existent immune system, I know I more than likely would be okay.

Just like any other virus, the Rona has hit the elderly the hardest. Plus, using the percentage numbers doesn’t make it look like Doomsday as MSM presents it. But clicks, amirite?!

Florida, the escape for those who have retired, came out on top because its Republican governor used his brain:

Contrast the decisions by governors like Cuomo with those of Florida Gov. Ron DeSantis. In Florida, all nursing home workers were required to be screened for COVID-19 symptoms before entering a facility. On March 15, before most states had locked down, DeSantis signed an executive order that banned nursing home visitations from friends and family, and also banned hospitals from discharging SARS-CoV-2-infected patients into long-term care facilities.

“Every day on these calls [with hospitals], I would hear the same comments and questions around, ‘We need to get these individuals returned back to the nursing home,’” said Mary Mayhew, who runs Florida’s Agency for Healthcare Administration. “We drew a hard line early on. I said repeatedly to the hospital, to the CEOs, to the discharge planners, to the chief medical officers, ‘I understand that for 20 years it’s been ingrained, especially through Medicare reimbursement policy, to get individuals in and out. That is not our focus today. I’m not going to send anyone back to a nursing home who has the slightest risk of being positive.’ What we said constantly is let’s not have two cases become 20 or five become 50. If you don’t manage this individual as you return them back, you will have far more being transferred back to the hospital.”

Florida also prioritized long-term care facilities for personal protective equipment, or PPE, with the understanding that it was just as important, if not more so, to protect workers at nursing homes and assisted living facilities. “If I can send PPE to the nursing homes, and they can prevent an outbreak there, that’s going to do more to lower the burden on hospitals than me just sending them another 500,000 N95 masks,” said DeSantis.

Larry Kudlow sees ‘glimmers of hope’ for US economy

“I understand that for 20 years it’s been ingrained, especially through Medicare reimbursement policy, to get individuals in and out. That is not our focus today. I’m not going to send anyone back to a nursing home who has the slightest risk of being positive.”

YES!! All it took to prevent disaster in Florida was COMMON SENSE and LEADERSHIP!!

What is curious to me (read suspicious) is why the Governors who did this are mostly Democrats. All the Governors got the same guidelines right?

So why is this mostly Democrat run states that did this?

DeWine in Ohio is a “republican”

Not as “principled” of a republican as Kasich, but he likely gets the newsletter from the #neverTrump Cult

Whatever the Trump administration suggests, do the opposite

When proven wrong for having done so, blame Trump anyway

“Nothing will be done, and he’ll walk away untarnished. In the eyes of the “Democrat Elite Ruling Class”, he did nothing wrong. All of the dead involved can and will vote Democrat now.”

BINGO! — beyond any reasonable doubt.

As good as it gets on this board, really a great observation.