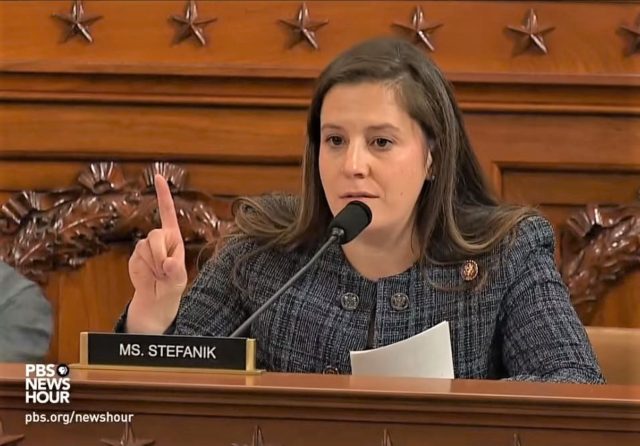 Her call came after a new report showed the state quietly altered the way it publicly reports nursing home deaths from the virus.

In early May the state stopped counting nursing-home patients who died from COVID in hospitals in its official tallies of nursing-home fatalities, The Daily Caller reported. It now only includes those deaths that occur in the nursing home facility itself.

Cuomo is taking heat for vulnerable nursing home populations ravaged by coronavirus — with a state death toll of at least 5,300, and that’s with the state’s new counting method that ignores outside-facility deaths.

“Today I joined my @NewYorkGOP colleagues in the House to call for a federal investigation of Cuomo’s failed nursing home policies. NOW they admit they unethically changed the way they report nursing home deaths. An INEXCUSABLE tragedy for NY – NEED ANSWERS,” Stefanik, an upstate Republican, said in a tweet.

Today I joined my @NewYorkGOP colleagues in the House to call for a federal investigation of Cuomo’s failed nursing home policies. NOW they admit they unethically changed the way they report nursing home deaths. An INEXCUSABLE tragedy for NY – NEED ANSWERShttps://t.co/pHY98zlTN2

For all practical purposes, the lockdowns are over.

Lockdown-weary New Yorkers ditched the distancing to get social this weekend — transforming parts of the Big Apple into a raucous, late season Mardi Gras.

Yet the city’s COVID-19-be-damned attitude was nothing compared to the scene in Belmar, NJ, where huge crowds also flouted state-mandated guidelines to stay six feet apart to curb the spread of the bug — as they waited shoulder-to-shoulder on the boardwalk for their turn to buy beach badges.

Outside popular bars in the Upper East Side, the East Village and in Greenpoint, Brooklyn, booze-hounds came for the take-out cocktails, and then stayed, and stayed — sipping drinks on packed sidewalks — and soaking up lively scene, which rubbed those most vulnerable to the virus the wrong way.

“They don’t care about us,” said Ann Trent, 72, as she sat on a bench by the Brooklyn Bridge. “What happened to all of us protecting everyone else?”

Iran’s coronavirus data appear to be as reliable as China’s.

It is no secret that Iran has been hit hard by the coronavirus. Official government figures show that around 100,000 people were infected by the virus and around 6,500 have died. But a report by the research arm of Iran’s parliament said the number of cases could be eight to 10 times higher, making it among the hardest hit countries in the world. The report said the number of deaths could be 80 percent higher than officials numbers from the Health Ministry, about 11,700.

The Iranian government is currently reporting a decline in the number of COVID-19 infections and deaths in many areas, even though local authorities are expanding cemeteries in places like Tehran where the municipal council said it had to add 10,000 new graves to its largest cemetery, Behesht e-Zahra.

Interviews with more than 30 medical professionals and a review of communications by doctors on messaging apps and other documents by an Associated Press reporter in Cairo revealed many previously unreported details. The reporting paints a fuller picture of the roots and extent of the country’s disjointed response as the deadly virus spread throughout the population.

Scientists at a California biotech company claim that they have found an antibody that completely blocks coronavirus in a discovery they called a ‘cure”.

It’s one of several antibodies planned to be combined for a drug ‘cocktail’ Sorrento is developing in collaboration with Mt Sinai School of Medicine in New York.

In a press release, Sorrento said it could produce up to 200,000 doses of the antibody a month – a production timeline that would likely make the drug available months sooner than a COVID-19 vaccine is expected.

Joining a chorus of doctors, an epidemiologist now challenges the need for a lockdown.

An epidemiologist known for his contrarian takes to the global response to the coronavirus pandemic is arguing that the ongoing government lockdowns meant to mitigate the disease are based on bad science, and that countries “could open up again and forget the whole thing” if they so desired.

Knut Wittkowski for several weeks has been among the growing chorus of scientists, epidemiology experts, statisticians and other intellectuals who are claiming that the broad economic shutdowns, restrictive policies and harsh mitigative measures put in place by world governments are doing more harm than good.
Public health authorities across the globe have argued that the lockdowns, stay-at-home orders, “social distancing” mandates and other policies are necessary to prevent the collapse of healthcare systems and the deaths of tens of millions.

These measures “most likely made the situation worse,” Wittkowski argued in an interview with Spiked this week.

“Firstly, we have the direct consequences: suicides, domestic violence and other social consequences leading to death,” Wittkowski said of the lockdowns. “And then we have people who are too scared to go to the hospitals for other problems like strokes or heart attacks. So people stay away from hospitals because of the Covid fear. And then they die.”

When he says someone died, or didn’t, it means exactly what he wants it to mean.

The question, is who is to be master.

May not be safe for work.

The Fascist have taken over the UK.

In fact, a lot of fakes and stuffing. This applies to people who are really at the forefront and say that it’s hard for them to do anything because they’re hard and understandable. I saw these videos of suffering doctors, but the fact is that they also have panic and that they really can not stand it. From this they have stress and the understanding that there are a lot of people. I hope that this will stop and we will receive reliable information about the virus, otherwise those who give false information should be put here: “https://floridarehabexperts.com/drug-and-alcohol-rehab-centers-near-me” . I myself recently arrived home from there, rested well after a nervous breakdown. Have a nice day and good luck!