Salons are suing California over shutdown. Washington state eateries will have to keep log of customers to aid in contact tracing. Coronavirus pandemic may lead to 75,000 “deaths of despair.” 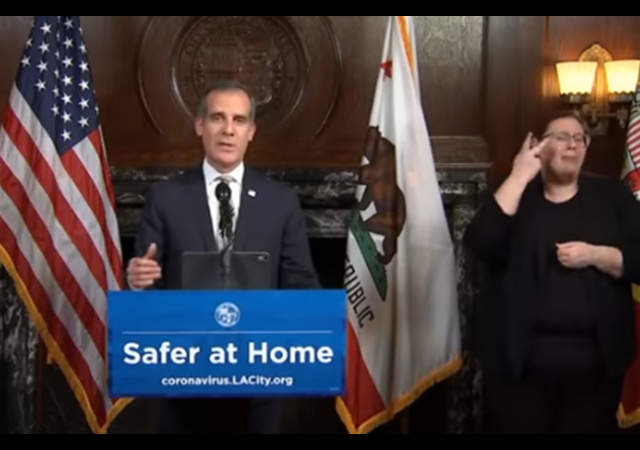 It seems like only yesterday we updated everyone that Los Angeles was extending its “safe at home” orders to August.

That’s because it was!

After the news spread about the move, built on data and policies that are increasingly coming under fire, it appears such plans are now “adjustable.”

Los Angeles Mayor Eric Garcetti said on Tuesday that while county officials are recommending the stay-at-home order to be extended for the next three months, the order is also flexible.

“When our county health officer Dr. (Barbara) Ferrer merely said that an order would stay in place for at least three more months, that doesn’t mean the order stays in place exactly as it is today,” Garcetti said on CNN.

The mayor said the city can not fully reopen until a vaccine has been developed.

“It’s just a reminder of how delicate and fragile this time is, but do not freak out when you hear a scientist say that it’s still going to be here and we’re still going to be living under health orders,” Garcetti said about the extension.

Garcetti was clearly doing damage control when he appeared on CNN interview with host Anderson Cooper.

“I want to reassure people because I think there was a lot of panic suddenly when the headlines said we’re all going to stay exactly as we are for three more months when that’s not the case.”

“This is just as dangerous a virus today as it was when it arrived,” warns Mayor of Los Angeles Eric Garcetti. “We should never become too comfortable. We’re learning to live with it, not moving beyond it.” https://t.co/3cxHO27yBP pic.twitter.com/hFPI2eexHu

I suspect that the CA25 election, which flipped a blue congressional seat to red for the first time since 1998, might inspire more flexibility among the state’s ruling Democrats.

Meanwhile, California salons are fighting the state orders in the court.

The Center for American Liberty filed a federal lawsuit Tuesday against California Gov. Gavin Newsom on behalf of the Professional Beauty Federation of California (PBFC) in an attempt to reopen hair salons statewide.

The organization, in collaboration with the Dhillon Law Group, represents more thn 500,000 hair salon owners who want salons to be reclassified from stage three in California’s reopening process, and be allowed to open now.

The PBFC is using the slogan #OpenSalonsNow to promote the effort and encourage others to pressure to the governor to allow beauty salons to reopen.

Fast food in the Age of Coronavirus will not include self-serve soft drinks.

As it begins to reopen some 15,000 Burger King, Popeye’s and Tim Hortons locations across North America, fast-food giant Restaurant Brands International said Tuesday it’s zeroing in on areas vulnerable to infection — including soda fountains where customers can refill their cups as many times as they want.

“We have turned off our self-serve soda fountains and are offering beverages, extra condiments and trays from the behind the front counter,” Restaurant Brands’ Chief Executive Jose Cil wrote in an open letter on Tuesday.

The company has “fully embraced the notion that parts of our restaurants need to change – certainly, for the foreseeable future and possibly forever,” Cil added.

In Washington state. “contact tracing” is now on the menu.

With eight Washington counties now approved to move to Phase 2 under Gov. Jay Inslee’s four-phase plan to reopen the state, the governor’s office on Monday released a set of requirements restaurants will have to comply with if they want to reopen for dine-in service.

Stevens, Wahkiakum, Skamania, Ferry, Pend Oreille, Columbia, Garfield and Lincoln counties have all been cleared for Phase 2, which allows restaurants to reopen at 50% capacity, and caps table sizes at five.

Notably, the 13 criteria that restaurants will have to adhere to in order to reopen for dine-in service includes a stipulation that they “create a daily log of customers and maintain that daily log for 30 days, including telephone/email contact information, and time in.”

This is to aid in any contact tracing, should that become necessary.

Coronavirus pandemic may lead to 75,000 “deaths of despair.”

Mental health is no less important than physical health.

COVID-19 has directly claimed tens of thousands of U.S. lives, but conditions stemming from the novel coronavirus — rampant unemployment, isolation and an uncertain future — could lead to 75,000 deaths from drug or alcohol abuse and suicide, new research suggests.

Deaths from these causes are known as “deaths of despair.” And the COVID-19 pandemic may be accelerating conditions that lead to such deaths.

“Deaths of despair are tied to multiple factors, like unemployment, fear and dread, and isolation. Prior to the COVID-19 pandemic, there were already an unprecedented number of deaths of despair. We wanted to estimate how this pandemic would change that number moving forward,” said one of the study’s authors, Benjamin Miller. He’s chief strategy officer for the Well Being Trust in Oakland, Calif.