It’s now a mad rush to “fill every vacancy” (and maybe create more vacancies) in case Republicans lose the Senate and/or presidency. 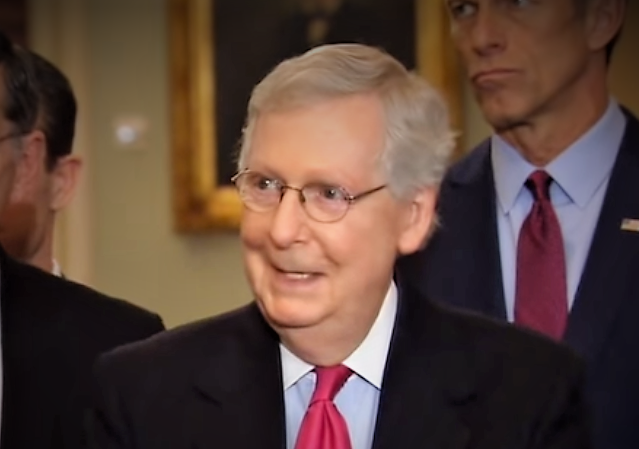 The “while you were focused on [fill in name of event or crisis]” paradigm for posts about Trump judicial nominations is now an unofficial series:

There is, according to the media, a mad rush to push through as many judges as possible out of fear that Republicans could lose the Senate and/or the presidency, either of which event would tank the generational project to rebalance the federal judiciary.

Leftist Democracy Now laments that McConnell called the Senate back into session for the judicial confirmation process:

Republican Senate Majority Leader Mitch McConnell brought senators back from an extended, six-week recess this week but did not schedule any coronavirus-related measures. McConnell’s first order of business was a confirmation hearing for 37-year-old Justin Walker, President Trump’s nominee for a lifetime appointment to the U.S. Court of Appeals for the District of Columbia.

Bloomberg Law notes that Republicans are rushing against the November clock:

An agenda disrupted by the coronavirus and squeezed by the election calendar pose new obstacles for Republicans in their drive to confirm dozens of judges to federal courts.

Senate Majority Leader Mitch McConnell’s motto is “leave no vacancy behind,” but the list of nominees idling outside the floor or awaiting action by the Senate Judiciary Committee or yet to sit for a confirmation hearing is getting longer. The last confirmation was nearly three months ago.

President Donald Trump has selected nominees for just over half of the 78 current or future federal district court and two appellate vacancies, according to a Bloomberg Law analysis of federal courts data. The Judiciary Committee will on Thursday consider sending several more trial court nominations to the floor for consideration. There are 10 of them awaiting action. But most of the president’s pending picks have yet to have a hearing. 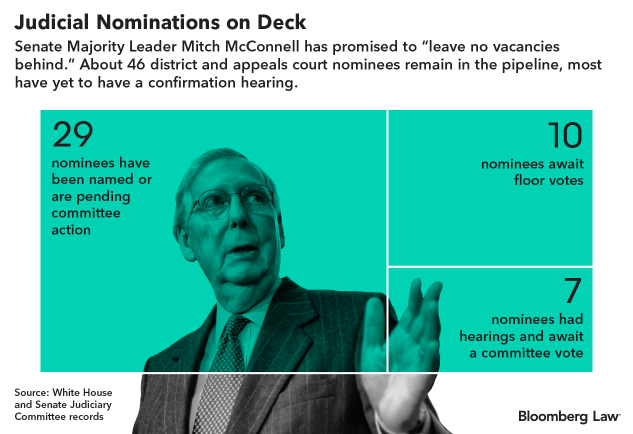 Carrie Severino writing at National Review has more on the current head count to date.

But before you can achieve a true generational change before the next election, Republicans need even more vacancies to fill. Business Insider writes that Fearing the White House and Senate are lost, GOP insiders want these 80 judges to retire now:

Fearing an electoral bloodbath in November, President Donald Trump and his Republican allies are working frantically to secure as many lifetime appointments for conservative jurists as they can while the GOP still holds the reins of power in the Senate and White House.

As the clock ticks, the effort has intensified beyond filling vacancies to creating them: Conservative activists and GOP political insiders are mounting a sotto voce campaign urging older conservative judges to retire now before it becomes too late for Trump and Senate Majority Leader Mitch McConnell to swap them out for younger models.

Insider has obtained a list of more than 80 judges that Republican activists have identified as candidates for the pressure campaign….

It names Republican-appointed judges who’ve reached the sweet spot in their careers where they are now eligible for retirement or senior status — a sort of judicial semiretirement — and the lifetime pension that comes with it. The full list is published below.

The judicial confirmation train has slowed down, but hasn’t stopped. While you were locked-in and focused on Obamagate, Mitch McConnell was going about his business.

Strategically, pushing the judges who are eligible to transition to senior status, creating vacancies makes sense. My question wood be the Senate calender. Assuming the d go full throttle in insisting on using the maximum amount of time for each nomination, how many judges could be confirmed?

Another point is that other vacancies remain in the administration. Targeting the most important executive branch positions is crucial. Radcliff to DNI is just one example. Many others in significant administrative agencies exist. These rule making positions are equally important.

My recommendation to McConnell would be to push the calender by revising the work hours of the Senate to a a 16 hour day if not a 24 hour day. Develop a rotation of Senators to hold the floor and force the d to work around the clock. Collegiality be damned.

Yes and no – mostly no. First, you’d be pushing out conservatives, because the leftists aren’t going to do anything to benefit us – witness Ginsburg. Second, the Republicans can’t be trusted to fill these slots at all, much less with conservatives – witness the current backlog and slow pace. Stop trying to push Thomas out of the court. He’s the ONLY one I completely trust. He’ll leave when he’s ready, not at the request of a bunch of self-serving politicians so he can be replaced with another Roberts.

I didn’t say Thomas. SCOTUS doesn’t have a SR status.

This action of nudging judges eligible for SR status to do so in order to create a vacancy would be at the Appellate level. That’s where the true value is anyway in terms of restoring balance. The appellate courts hear thousands of cases while SCOTUS only a hundred or so each year.

Realistically most cases have a ceiling at Appellate court level. This also generate decisions that are split (differ) between the circuits which is one factor in getting SCOTUS to hear the case.

So if you can create a vacancy by having a 75 year old Bush appointed judge go to SR status and get a 45 or 50 year old replacement appointed and confirmed, go for it. If a workable plan to ram through the nominees doesn’t exist, then don’t.

Greta job on the judges, but McConnell is still weasel numero uno. I do not trust him one iota.