While you were focused on the pandemic, Democrats continued to pursue evidence for another impeachment try. 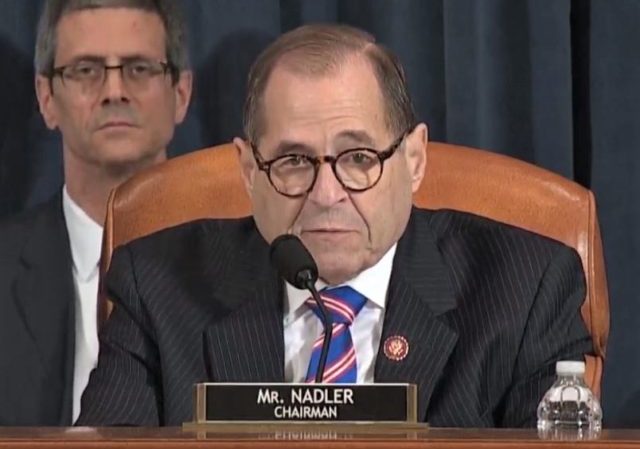 The Supreme Court has temporarily blocked an attempt by the House Judiciary Committee to obtain secret grand jury material in the Mueller Russia collusion probe, as had been ordered by the D.C. Circuit Court of Appeals.

Here is the text of the Order:

Today the Supreme Court blocked the disclosure to the House Judiciary Committee of grand jury materials from the investigation by Special Counsel Robert Mueller…. Today the justices granted that request, temporarily staying the D.C. Circuit’s ruling until DOJ files its petition for review, which now has a June 1 deadline, and the Supreme Court rules on that petition.

The dispute began last year, shortly after Attorney General William Barr released a version of Mueller’s report to Congress and the public that contained redactions made in part under Federal Rule of Criminal Procedure 6(e), to protect the secrecy of grand jury materials. According to the House Judiciary Committee, the redactions at the heart of this case “bear on whether the President committed impeachable offenses by obstructing the FBI’s and Special Counsel’s investigation into Russian interference in the 2016 election and his possible motivations for doing so.”

In July 2019, after DOJ declined to comply with a subpoena for the unredacted Mueller report, the committee went to federal district court in Washington, D.C., where it asked the chief judge, Beryl Howell, to order the disclosure of the parts of the Mueller report redacted under grand jury secrecy rules, as well as the related grand jury materials, such as transcripts and exhibits….

The district court agreed with the committee’s request, reasoning that the rule’s reference to disclosure before a “judicial proceeding” includes disclosures ahead of a Senate impeachment trial. Moreover, the district court concluded, the committee had shown that it had a specific need for the material that outweighed any need for secrecy, particularly because Mueller’s investigation was over.

The DOJ appealed to the D.C. Circuit, which issued a decision in March that upheld the district court’s order. The department then went to the Supreme Court on May 7, asking the justices to intervene to prevent the release of the grand jury materials until it could file a petition for review of the D.C. Circuit’s order and the Supreme Court ruled in the case. Otherwise, the government argued, it would “have to disclose the materials on May 11, 2020, which would irrevocably lift their secrecy and possibly frustrate the government’s ability to seek further review.”

With the May 11 deadline looming, the court on May 8 put a temporary hold – to which the House had not objected – on the release of the grand jury materials and ordered the committee to respond by May 18….

Although the court did not say so explicitly, [the ordered] timetable strongly suggests that the justices do intend to decide whether to take up the case on the merits before they leave for their summer recess, whenever that might be.

Why to Democrats want this material now that the Mueller probe is over? For an impeachment investigation:

The Democratic-led House of Representatives on Monday told the Supreme Court that the House needs secret Mueller grand jury materials to determine if there is new evidence of impeachable offenses involving President Donald Trump.

The House Judiciary Committee has been attempting obtain the documents prosecutors collected from witnesses about Trump in a back-and-forth legal fight that’s now reached the Supreme Court.

“The Committee’s impeachment investigation related to obstruction of justice pertaining to the Russia investigation is ongoing,” Douglas Letter, the House general counsel, said in a court filing Monday.

“If this material reveals new evidence supporting the conclusion that President Trump committed impeachable offenses,” Letter said, “the Committee will proceed accordingly — including, if necessary, by considering whether to recommend new articles of impeachment.”

While you were focused on the pandemic, Democrats continued to pursue impeachment.

…which I am not going to believe until I see a statement from the WH Counsel saying the same. Preferably under oath. Including statements confirming her email from other individuals who were there. Also under oath.

Why to Democrats want this material now that the Mueller probe is over? For an impeachment investigation:
Malarkey. They want it so they can leak any juicy tidbits (or tidbits which can be twisted into juiciness) to their operatives in the press, in order to try and smear Trump before the election.

Which, BTW, is one of the big reasons that grand jury materials are secret to start with.

Is there a limit to how much jurisprudence they’re willing to overturn to get what they want?

I say no, but wonder if perhaps fear of what they are unleashing might catch up with them in the end.