Everyone is focused on Ginsburg’s health, but would one of the older conservatives (Thomas, Alito) retire at the end of June to make sure the seat is filled by another conservative? 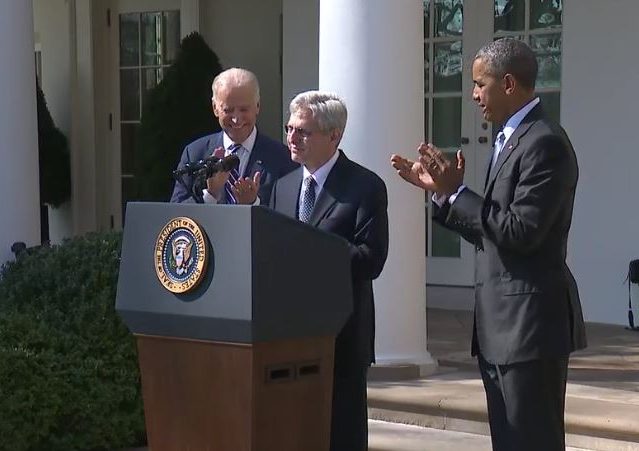 Can you feel the tension? Every time Ruth Bader Ginsburg goes to the hospital or has a medical diagnosis or procedure, you can feel it. What if this is the time?

Of course, while Ginsburg is the oldest and most infirm of the Supreme Court Justices, the unexpected death of Antonin Scalia is a reminder that the unexpected can happen.

Mitch McConnell famously has bragged that of course the Republican Senate would confirm a replacement for a Supreme Court vacancy. Comparisons to Merrick Garland were inaccurate, because the Garland was nominated by a president whose party did not control the Senate.

I wrote about McConnell’s explanation in October 2018, McConnell opens up possibility Senate would confirm Trump SCOTUS nominee in 2020:

In discussing Senate confirmation of Supreme Court nominees, McConnell discussed how he did not allow Obama’s nomination of Merrick Garland to go forward. He contrasted the Republican position with Democrats’ attacks on Brett Kavanaugh by pointing out that Republicans didn’t try to destroy Garland, they simply followed Senate tradition of not voting on a nominee in a presidential election year.

But in describing that history, McConnell said that the history of the Senate going back to the 1800s was to not vote on a nominee in a presidential elections year where the president is of a different party than the party controlling the Senate.

That last provision was picked up on by Wallace, who asked if that meant Republicans would confirm a Trump nominee in the next presidential election year.

McConnell didn’t answer directly, he just repeated that the tradition was not to confirm in the last year where the president was of a different party than controlled the Senate. That would mean, but McConnell didn’t say explicitly, that if there were a Supreme Court vacancy in 2020, the Senate would move forward with confirmation despite the looming 2020 presidential election.

[email protected]: We didn’t attack Merrick Garland’s background and try to destroy him. We simply followed the tradition in America, which is that if you have a Senate of a different party than the president, you don’t fill a vacancy created in a presidential year. pic.twitter.com/u1jm36EEbC

McConnell just announced, with a smile on his face, that if there were a Trump nominee for a Supreme Court vacancy in the 2020 election year, the Republican controlled Senate would confirm that nominee.

Sen. Lindsey Graham (R-S.C.) said the Senate would work to confirm a Supreme Court nominee this year if a vacancy arises, saying the circumstances are different from 2016, when Republicans blocked then-President Obama’s nomination of Merrick Garland.

Graham, who chairs the Senate Judiciary Committee, noted that both the Senate and the White House are held by Republicans, versus in 2016, when the GOP-held Senate denied Garland a hearing.

“Well, Merrick Garland was a different situation. You had the president of one party nominating, and you had the Senate in the hands of the other party. A situation where you’ve got them both would be different. I don’t want to speculate, but I think appointing judges is a high priority for me in 2020,” Graham said in an interview on “Full Court Press with Greta Van Susteren” set to air Sunday.

“If you look into the history of the country, there had not been an occasion where somebody was confirmed in a presidential election year after primary started when you had divided government,” he added.OThe discussion takes place starting at the 5:00 minute mark of the video at Greta’s website. Unfortunately, the video does not appear to have an embed code.

Other Republicans are more blunt: We’re filling the seat no matter what. Politico reports:

“We’re going to fill it” if there is one, said Sen. John Barrasso (R-Wyo.), the No. 3 GOP leader. “With Justice Scalia … people might not have thought he was the one, because he wasn’t the oldest at the time. You just never know.” ….

“My guess is yes. That’s ultimately a decision the leader makes. But I think you’ve heard him speak to the subject before. He believes if there was a vacancy, he’d fill it,” said Sen. John Thune of South Dakota, the GOP whip. “Confirmation hearings in the age of COIVD-19 would be very interesting but I’m sure no less contentious than the last one.” ….

In a brief interview, Senate Judiciary Chairman Lindsey Graham (R-S.C.) declined to say there was a cut-off to when a new vacancy might be considered. His predecessor, Sen. Chuck Grassley (R-Iowa), declined to hold a hearing for Garland.

Sen. Roy Blunt (R-Mo.) said a Supreme Court opening represents the “ultimate hypothetical” — but one Republicans would be prepared to respond to whenever it occurs.

In addition to Ginsburg’s health, senators are also keeping tabs on whether any other justices will retire. Four justices are 70 or older: Ginsburg, Stephen Breyer, Clarence Thomas and Samuel Alito.

So, if there is a vacancy, expect Republicans to try to fill in before November. And it the vacancy is created by one of the liberals, expect all hell to break loose as Democrats not only raise Merrick Garland, but the Wuhan coronavirus disruption as well.

Would one of the older conservatives (Thomas, Alito) retire at the end of June to make sure the seat is filled by another conservative?

RBG seems to have one foot already in the grave.
Breyer is 80 IIRC.
Sotomayor has diabetes.

And Trump is likely to have a 2nd term.

Oh, and don’t forget all the other federal courts he has packed. If Trump was bad on everything else, it would be worth it.

Yes, barring something very bad happening Trump is almost certain to have a 2nd term. It’s very possible he’ll get to appoint at least one, and maybe more, during a 2nd term in office.

I consider it crucial that Trump stays in office. It is equally important that someone with a similar background and temperament be ready to take over when Trump’s reign ends.

There is no person on earth with a “similar background and temperament”. I’d be ecstatic if the next one just had similar policies.

IMO the limited time within the Senate Calender between today and the election should be spent:
1. Scheduling confirmation vote for every Judicial nominee who’s nomination was passed by Judiciary committee

2. Scheduling committee hearings for every Judicial nominee whose nomination has not passed the Judiciary committee

3. Scheduling a confirmation vote for every rule making agency nominee who has been passed through the relevant committee

4. Scheduling committee hearing for every nominee before the relevant committee

Then take stock of the calender and the task ahead. If we can get these current nominee a final confirmation vote and still have time left great. Now go play parliamentary shenanigans to push more confirmation votes for additional nominees.

Gee whiz, do what is in front of you now before adding to the numerous of unconfirmed nominees.

Btw, what army does the Supreme Court have to enforce their will?

The likes of Lois Lerner will turn the IRS on them, or obama and company will otherwise compromise one of them as they have that jackass Roberts.

Why are we all hoping Trump replaces an additional two conservative justices? I want him replacing wild and crazy liberal justices!

Sen. McConnell could just take the bull by the horns and announce that “since Ted Kennedy and Joe Biden decided to take Supreme Court confirmations from sober consideration of qualities and turn them into intense, politically-driven, hyper-partisan show-trials, OF COURSE we’ll follow the precedent that they set.”

“And I want to specially thank Joe Biden for creating such a useful tradition.”