AP has refused to call the race, but Garcia has an impressive lead over Democrat Christy Smith 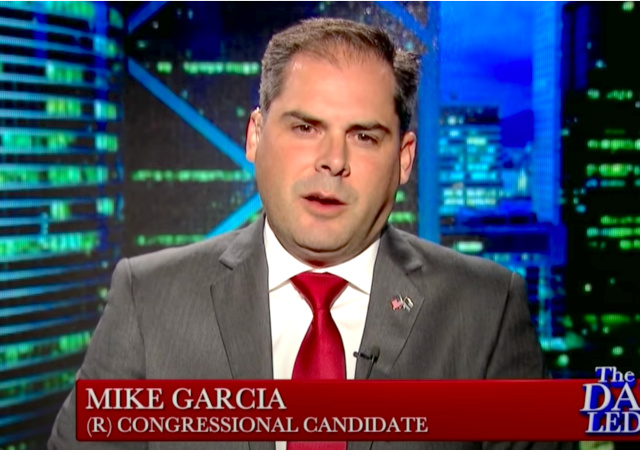 UPDATE: They have called the race. Garcia defeated Democrat Christy Smith 55.05% to 43.95%

The GOP has not flipped a seat in California in 22 years:

Garcia will serve out of the rest of Hill’s term in the 116th Congress until January, but Smith and Garcia will have a rematch in just six months for the regular general election in November to represent the seat in the 117th Congress.

Smith wrote of the special election in her concession statement: “This is only one step in this process, and I look forward to having a vigorous debate about the issues in the upcoming November 2020 election, from healthcare access to job creation, aid for working families, investments in local classrooms to wildfire protection, women’s rights and more. In the months ahead … there is no doubt in my mind that together, we will prevail in the fall general election.”

Garcia also had the diversity the GOP needed:

For Republicans, Garcia was an ideal recruit as a political newcomer and a Latino with a military background for a racially diverse district where the defense and aerospace industries are major employers. As a first-time candidate, he also had no legislative record to attack, allowing Republicans to focus on negatively highlighting some of Smith’s votes.

In addition to national Democrats being concerned with Smith’s fundraising not being impressive enough, according to HuffPost, Smith further got herself in hot water for seemingly mocking Garcia’s military service and credentials for office in a video town hall. She publicly apologized after sarcastically joking of Garcia, “Did you guys know he’s a pilot?”

Garcia hopes to flip the seat to red after a six-month campaign to replace Democrat Rep. Katie Hill, who resigned in October due to a sex scandal.

The Associated Press has refused to call the election since officials still have to count ballots.

Republicans tend to fare better in California in elections attracting fewer voters, but Garcia appears to have exceeded party expectations in a race that attracted record participation for a special election. Some 34% of registered voters returned their mail-in ballots, while just a smattering of voters turned up in person at a limited number of polling places.

In an unexpected twist, the all mail-in voting that Democrats across the state demanded and Republicans criticized appeared to benefit Garcia. Older Republican voters returned their ballots in much higher numbers than younger Democrats in the district.

Mail-in ballots postmarked on Tuesday will come in the next few days, but it’s doubtful Garcia will lose his lead.

Dave Wasserman at the Cook Political Report said Garcia could “become the only House Republican from a district Hillary Clinton won with more than 50% of the vote.” From RealClearPolitics:

Wasserman quickly cautioned that the victory could be short-lived because higher turnout in the general election, where Garcia and Smith will face off again, could help Democrats take the seat back.

Of course they won’t call the race. The “harvesting” of ballots needs to make up the gap and score a bit higher. They’re getting busy on it as we speak…

On last update, 12% lead with 74% of precincts reporting.

Yes, yes, precincts aren’t the same size, but as a first SWAG, the Screaming D’s need not quite 100% at the remaining precincts to take it.

Anybody giving odds? (What is the Magin of Fraud, anyway?)

The opponent has conceded. The car trunk was just not big enough…

Pelosi says “I *told* you idiots to use the Escalade!”

Being that she conceded they may not count the remaining ballots.