Sixth Circuit Court of Appeals: “Assuming all of the same precautions are taken, why is it safe to wait in a car for a liquor store to open but dangerous to wait in a car to hear morning prayers?” 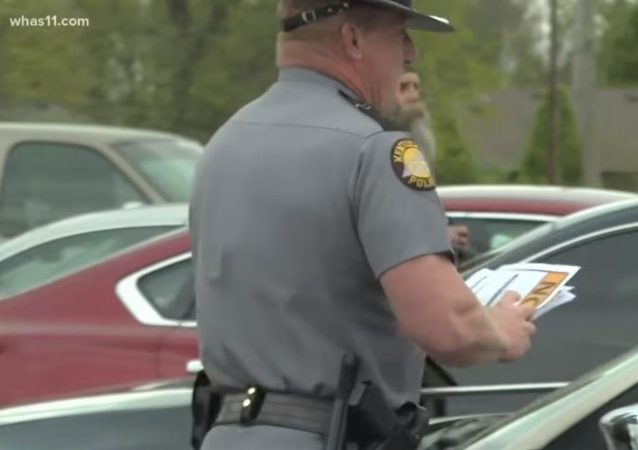 We have followed several court cases involving bans on drive-in church services, including on in Louisville, Kentucky, and another in Greenville, Mississippi. We addressed likely litigation in the age of pandemic at our April 26, 2020, live event, Constitutional Rights in the Age of Government Overreach.

To the extent there is a pattern emerging, it is that the state cannot bar religious services where CDC social distancing and related precautions are followed, if the state also allows drive-up and drive-through practices for secular institutions like fast food and liquor stores.

You’d think that would be obvious to public officials, but they seem to have it out for church services, so the courts are intervening.

The Sixth Circuit Court of Appeals affirmed that principle in a case from Kentucky involving the Maryville Baptist Church. (This is a different case than the Kentucky case we previously wrote about.)

The original issue was a ban on in-person church services, which the church held despite state order. The police took down the license plate numbers of vehicles in the parking lot and sent notices of possible criminal prosecution.

The church and one of the parishioners sued for an injunction, includng objecting to the extent the order also prohibited drive-up services. The District Court denied an injunction (pdf.), finding that the ban on in-person services was warranted, and that the Governor’s Order did not apply to drive-up services. The church filed a motion for an emergency injunction pending appeal (pdf.) which the state opposed (pdf.)

The Sixth Circuit ruled on Saturday, May 2, 2020, granting in part the injunction pending appeal. The Order (pdf.) provides a good example of how we can expect court’s to address these issues: The appeals court does not question the government’s authority to impose substantial health-related restrictions even on religious groups. But those restrictions both must be applied equally to secular and religious groups, and must have a legitimate health-related purpose. Where, as in this case, there was no issue of compliance with social distancing practices, there was no legitimate purpose in prohibiting churches from doing what drive-up and drive-in restaurants and big box stores do.

Here are key excerpts from the Order. First, the background on the retrictions:

The [Kentucky] orders, according to the Church, prohibit its members from gathering for drive-in and in-person worship services regardless of whether they meet or exceed the social distancing and hygiene guidelines in place for permitted commercial and other nonreligious activities….

On April 12, Maryville Baptist Church held a drive-in Easter service. Congregants parked their cars in the church’s parking lot and listened to a sermon over a loudspeaker. Kentucky State Police arrived in the parking lot and issued notices to the congregants that their attendance at the drive-in service amounted to a criminal act. The officers recorded congregants’ license plate numbers and sent letters to vehicle owners requiring them to self-quarantine for 14 days or be subject to further sanction.

Next, the religious liberty considerations:

The Church says these orders and enforcement actions violate its congregants’ rights under Kentucky’s Religious Freedom Restoration Act and the free-exercise guarantee of the First and Fourteenth Amendments to the U.S. Constitution…..

The likelihood-of-success inquiry instead turns on whether Governor Beshear’s orders were “the least restrictive means” of achieving these public health interests….

The adverse treatment of religious groups showed government was not using the least restrictive means:

The way the orders treat comparable religious and non-religious activities suggests that they do not amount to the least restrictive way of regulating the churches. The orders permit uninterrupted functioning of “typical office environments,” R. 1-5 at 1, which presumably includes business meetings. How are in-person meetings with social distancing any different from drive-in church services with social distancing?

Kentucky permits the meetings and bans the services, even though the open-air services would seem to present a lower health risk. The orders likewise permit parking in parking lots with no limit on the number of cars or the length of time they are there so long as they are not listening to a church service. On the same Easter Sunday that police officers informed congregants they were violating criminal laws by sitting in their cars in a parking lot, hundreds of cars were parked in grocery store parking lots less than a mile from the church. The orders permit big-lot parking for secular purposes, just not for religious purposes. All in all, the Governor did not narrowly tailor the order’s impact on religious exercise.

In responding to the state and federal claims, the Governor denies that the ban applies to drive-in worship services, and the district court seemed to think so as well. But that is not what the Governor’s orders say. By their terms, they apply to “[a]ll mass gatherings,” “including, but not limited to, . . . faith-based . . . events.” R. 1-5 at 1. In deciding to open up faith-based events on May 20, and to permit other events before then such as car washes and dog grooming, see Healthy at Work: Phase 1 Reopening, https://govstatus.egov.com/ky-healthy-at-work (last visited May 2, 2020), the Governor did not say that drive-in services are exempt. And that is not what the Governor has done anyway. Consistent with the Governor’s threats on Good Friday, state troopers came to the Church’s Easter service, told congregants that they were in violation of a criminal law, and took down the license plate numbers of everyone there, whether they had participated in a drive-in or in-person service….

The orders allow “life-sustaining” operations and don’t include worship services in that definition. And many of the serial exemptions for secular activities pose comparable public health risks to worship services. For example: The exception for “life-sustaining” businesses allows law firms, laundromats, liquor stores, and gun shops to continue to operate so long as they follow social-distancing and other health-related precautions. R. 1-7 at 2–6. But the orders do not permit soul-sustaining group services of faith organizations, even if the groups adhere to all the public health guidelines required of essential services and even when they meet outdoors….

Assuming all of the same precautions are taken, why is it safe to wait in a car for a liquor store to open but dangerous to wait in a car to hear morning prayers? Why can someone safely walk down a grocery store aisle but not a pew? And why can someone safely interact with a brave deliverywoman but not with a stoic minister? The Commonwealth has no good answers. While the law may take periodic naps during a pandemic, we will not let it sleep through one.

Compliance with social distancing was key:

Keep in mind that the Church and Dr. Roberts do not seek to insulate themselves from the Commonwealth’s general public health guidelines. They simply wish to incorporate them into their worship services. They are willing to practice social distancing. They are willing to follow any hygiene requirements. They are not asking to share a chalice. The Governor has offered no good reason so far for refusing to trust the congregants who promise to use care in worship in just the same way it trusts accountants, lawyers, and laundromat workers to do the same. If any group fails, as assuredly some groups have failed in the past, the Governor is free to enforce the socialdistancing rules against them for that reason….

Accordingly, the plaintiffs’ motion for an injunction pending appeal, and their motion to expedite briefing, oral argument and submission on the briefs, is GRANTED IN PART. The Governor and all other Commonwealth officials are hereby enjoined, during the pendency of this appeal, from enforcing orders prohibiting drive-in services at the Maryville Baptist Church if the Church, its ministers, and its congregants adhere to the public health requirements mandated for “life-sustaining” entities.

The Sixth Circuit opinion pretty much follows the legal reasoning I suggested would apply when we had our prior live event (pats self on back).

Courts will not prevent government stay-at-home orders as a general matter, but there must be proof the terms are necessary to fighting the spread of a contagious and deadly disease, are not arbitrary or vindictive, and are applied equally.

People are only in favor of “discretion” when they’re sure it won’t be pointed at them.

You can tell who’s on the inside, by who’s not bothered by sloppy language. Like in “emergency relief”, or gun laws.