Said on MSNBC “the Trump folks – if they found out how we knew what we knew about their … the Trump staff dealing with Russians – that they would try to compromise those sources” but admitted in recently released testimony “I didn’t know anything.” 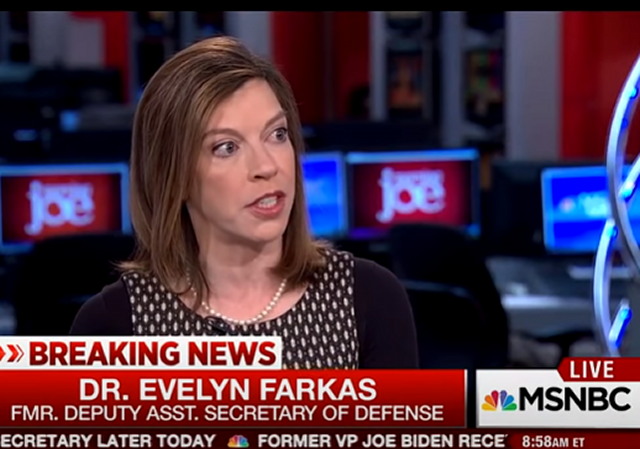 Evelyn Farkas was the Deputy Assistant Secretary of Defense under Obama. In March of 2017, she appeared on MSNBC’s Morning Joe, and lied about the incoming Trump staff’s “dealing with Russians.”

Shortly after that, she testified before Congress and admitted to then Congressman Trey Gowdy that she didn’t know anything.

Sean Davis reports at The Federalist:

Former Obama administration defense official Evelyn Farkas testified under oath that she lied during an MSNBC interview when she claimed to have evidence of alleged collusion, a newly declassified congressional transcript of her testimony shows. Farkas testified before the House Permanent Select Committee on Intelligence on June 26, 2017, as part of the committee’s investigation into Russian interference in the 2016 presidential election between Donald Trump and former Secretary of State Hillary Clinton.

Lawmakers keyed in on an appearance Farkas made on MSNBC on March 2, 2017, in which she urged intelligence community bureaucrats to disseminate within the government and potentially even leak to media any incriminating information they had about Trump or his aides.

This is what Farkas said on Morning Joe, via FOX News:

“I was urging my former colleagues and, frankly speaking, the people on the Hill, it was more actually aimed at telling the Hill people, get as much information as you can, get as much intelligence as you can, before President Obama leaves the administration,” Farkas, who is now a senior fellow at the Atlantic Council, said.

“Because I had a fear that somehow that information would disappear with the senior [Obama] people who left, so it would be hidden away in the bureaucracy … that the Trump folks – if they found out how we knew what we knew about their … the Trump staff dealing with Russians – that they would try to compromise those sources and methods, meaning we no longer have access to that intelligence.”…

“So I became very worried because not enough was coming out into the open and I knew that there was more. We have very good intelligence on Russia,” she said. “So then I had talked to some of my former colleagues and I knew that they were trying to also help get information to the Hill.”

See the clip of her appearance below:

Here is the testimony Farkas gave a few months later, again via The Federalist:

“Why don’t we go back to that sentence that I just asked you about. It says ‘the Trump folks, if they found out how we knew what we knew about their staff dealing with Russians,” Gowdy said. “Well, how would you know what the U.S. government knew at that point? You didn’t work for it, did you?”

“I didn’t,” said Farkas, a former mid-level Russia analyst who left the federal government in 2015.

“Then how did you know?” Gowdy responded.

“I didn’t know anything,” Farkas said.

“Did you have information connecting the Trump campaign to the hack of the DNC?” Gowdy asked.

“So when you say, ‘We knew,’ the reality is you knew nothing,” Gowdy asked later during the deposition.

“So when you say ‘knew,’ what you really meant was felt?” he asked.

This woman is now running for Congress in New York. See the tweet below and note how she says “I sounded the alarm about Russian election interference & stood up to Trump’s corruption.”

After serving Pres Obama in the @DeptofDefense, I sounded the alarm about Russian election interference & stood up to Trump’s corruption.

The right-wing media attacked me, but I didn’t back down. Now, I’m running for Congress in NY17. Join us: https://t.co/sYWqufrHl4#NY17

Maybe this is one of the reasons Adam Schiff didn’t want these transcripts to be made public.

Tucker Carlson did a segment on Farkas that’s worth watching:

It’s a solid Dem seat, so solid that in 2016 and 2018 the Reps couldn’t even find someone willing to mount a token candidacy against Nita Lowey. Now Lowey is retiring, so Farkas’s only challenge is winning the Dem primary. Dem primary voters are unlikely to see this, since none of her rivals would be likely to bring it up. And if they did see it they’d probably conclude that she told the truth on TV and lied to Congress, and they’d approve of that.