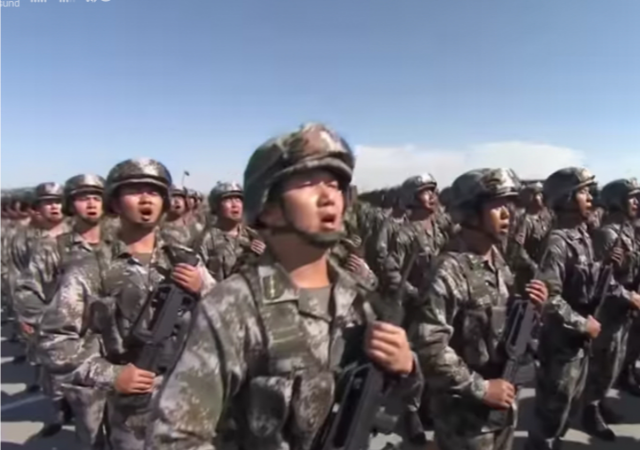 The border tensions between China and India have escalated once again, after hundreds of Chinese troops crossed into Indian territory. Soldiers of the Chinese People’s Liberation Army (PLA) breached the Indian border at multiple locations in the northern Himalayan region of Ladakh, Indian media reports said on Saturday.

“Chinese had managed to come well inside the Indian territory and are also conducting aggressive patrols with motor boats in the Pangong lake,” Indian broadcaster NDTV reported. “The Chinese troops crossed 3 km into what India perceives to be its territory South East of the Galwan Valley in eastern Ladakh,” Indian news website The Print confirmed.

The Chinese detained several Indian soldiers during the incursion. “An Indian patrol party was detained and later released by Chinese forces,” NDTV reported. The Indian military refused to comment on the incident.

On Sunday, the NDTV reported the detention of Indian soldiers:

An Indian patrol party was detained and later released by Chinese forces after a scuffle between the two sides in Ladakh earlier this week, sources have told NDTV amid rising tensions between the two countries along the Line of Actual Control. The situation was finally defused after a border meeting of commanders from both sides.

The Indian forces have briefed the Prime Minister’s Office (PMO), detailing the entire sequence of events that took place on near the Pangong lake.

“The situation became very volatile last Wednesday when a scuffle between Indian jawans and the Chinese resulted in detention of some of our jawans but later they were released,” a senior bureaucrat told NDTV.

The border intrusion was followed by a Chinese build-up along the Indian border. Chinese troops “trespassed on Indian territory at three different locations and set up fortified encampments,” Indian strategic expert Brahma Chellaney noted on Twitter.

The newspaper Times of India reported the Chinese military build up:

Chinese military is fast increasing its troops in areas around Pangong Tso lake and Galwan Valley along the Line of Actual Control in Ladakh, sending a clear signal that it was not ready to end its confrontation with the Indian Army anytime soon, people familiar with the situation in the disputed region said.

The Chinese side has particularly bolstered its presence in the Galwan Valley, erecting around 100 tents in the last two weeks and bringing in machinery for possible construction of bunkers, notwithstanding the stiff protest by Indian troops, they said. (…)

Military sources said the Indian Army has also been matching up to the Chinese build-up in both Pangong Tso lake and Galwan Valley and that it is in a much advantageous position in certain other sensitive areas in the region.

The United States backed India amid recent aggressive actions by the Chinese army. Ambassador Alice Wells, the senior U.S. diplomat for South and Central Asia, called Beijing’s behavior towards India provocative and disturbing. “The flare-ups on the border, I think, are a reminder that Chinese aggression is not always just rhetorical. And so whether it’s on the South China Sea or whether it’s along the border with India we continue to see provocations and disturbing behavior by China that raises questions about how China seeks to use its growing power,” she said on Wednesday.

China and India have a long history of border conflicts. Communist China disputes parts of its 2,200 mile Himalayan border with New Delhi. Chinese dictator Mao Zedong made sweeping territorial claims on India after annexing the Buddhist kingdom of Tibet which shared its western border with India. China attacked India in 1962, a war that ended in a devastating defeat for India, which lost around 16,600 square miles of its territory.

India faces the Chinese threat not just on its eastern and northern borders. The military planners in New Delhi are alarmed by Beijing’s so-called string-of-pearls strategy. China is gaining control over a network of strategic ports stretching from the Indian Ocean to the Persian Gulf, giving the Chinese Navy the ability to close India’s shipping lanes in case of a conflict.

The current wave of Chinese aggression in the wake of the Wuhan coronavirus pandemic is not limited to India. In recent months, the Chinese air force has repeatedly violated Taiwan’s air space, an independent nation which Beijing considers a breakaway province.

It appears that China is now making it’s moves.
In all directions, all at once.

Yes, they’re in a hurry. Everyone’s getting tired of them, and no big wins for them yet.

not by a long way–you reference a terrorist action–the semi with a tactical nuke inside(or two, or three)but do not make a distinction between that catastrophe and a deliberate, all-out nuke attack by another soverign nation

such an attack would result in the complete destruction of the aggressor–not only would the world expect it, our own people would demand it–you are obviously unfamiliar with both the size and capability of our nuclear forces

should such a situation occur where a nuclear attack by the chicoms was, in fact, actually being planned/considered, be assured we have the assets to interdict any such plan

No, but a couple of thousand on china and they are. Plus save your EMP breath. It’s boring.

While it’s great to think that bigger is better, that’s not always the case. Two nukes detonated over our country at altitude would produce an EMP that would shut down everything we rely on. EVERYTHING. Depending on what’s going on around the world, there are estimates that 95% or more of our population would die as a result.
Furthermore, such an act could be done covertly, say missiles fired from a ship close to American shores. No reasonable way to assess the source of the catastrophe. So how could we reasonably retaliate? To be fair, our political geniuses would kill vast numbers of whomever their preferred target is, but that doesn’t mean they hit the right folks. Nor would such retaliation bode well for humankind. 7’th mass extinction? Quite likely.
So perhaps North Korea would – irrationally – see this as an avenue to promote their own hegemonly by disguising such an attack as Chinese, figuring that with the US & China destroying each other as a result of their initial deception, allowing them to finally achieve some of the aggressive accomplishments they’ve desired for many decades. The fact that they would be badly impacted might not be of concern to them, since their leaders no doubt take the same self-protective actions our pols & the wealthy take here.
Also, the notion that having multiple-times the number of weapons of mass destruction provides a huge advantage is illusory. If I have twenty guns, and a crook comes in and stabs me with a knife, I’ve got the strategic advantage, but to no positive effect, because I’ll be dead before I can even respond. 6,000 nukes? It would only take a few to destroy the world, given the after-effects of an exchange in our modern, just-in-time, totally dependent on technology world. The only advantages I can think of by our over-capacity is 1/ that it would be very difficult for an aggressor to destroy all our armaments before we might discharge them and 2/ we could use them to break up the Earth into smaller orbital bodies to try to ensure that evolution never re-occurs here. “My football team has 6,000 players. We can surely whip your lousy 300 member team.” There was a famous battle a century or two ago where some small number – a couple of hundred? – Western troops destroyed 40,000 natives of somewhere. Senility hampers my recall. Numbers aren’t everything, though they certainly can be important. But they can also merely be a bigger target.

Note to India. You have nukes. Use them. Aniliate whatever base these thugs came from. Then proceed to recover exactly one half of the 16,000 square miles you lost in 62′. Obliterate all military and CCP bases contained within that 8,000 sq. Miles. Next bracket beijing with unarmed ICBM’s. This should all occur within an hour. Next, remain vigilant but enjoy your victory.

A whole lot of whiny, oh-woe-is-us, China-gonna-beat-us fatalism crap on this thread.

Grow a pair and FIGHT for this country, damnit! Get out there and try changing hearts and minds and recovering the attitudes and principles that made this country so great!

Quit yer bellyaching and get to work!

Absolutely right! Bring back slavery. NO votes for women and the poor – oops, that latter seems to be happening already. Invade more countries just like we used to. Overthrow democracies so dictators can kill off their freedom-loving populations and allow big corporations to steal scads of money from the labor of impoverished quasi-slave laborers. Let’s make America great again, just like we used to be.