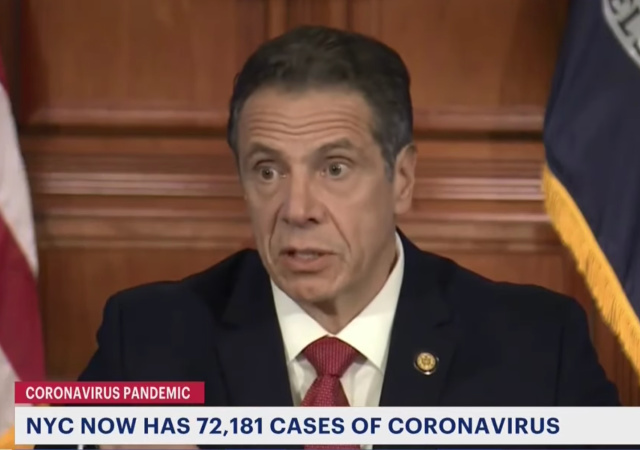 After making a massive fuss about ventilators, New York Gov. Andrew Cuomo now says the state has enough for now.

So no, the situation in New York is not as dire as was initially feared.

For days, New York Gov. Andrew Cuomo has sounded urgent warnings about an anticipated shortage of ventilators in his state’s hospitals.

On Thursday, April 2, Cuomo warned that “at the current burn rate,” his state would run out of ventilators for coronavirus patients in six days. On Friday, Cuomo announced that he would commandeer ventilators from Upstate New York for hospitals in Manhattan and other hotspots.

But at a news conference on Monday, Cuomo was less alarmed. He announced that New York has enough ventilators — or ventilator substitutes — for current needs:

“We don’t have anyone who says they need them now,” Cuomo told the news conference.

On March 22, we reported that Kentucky Senator Rand Paul tested positive for coronavirus.

Now it is being reported that the senator has recovered from COVID-19.

Sen. Rand Paul announced Tuesday that he has retested negative for COVID-19 after being diagnosed with the novel coronavirus and placing himself in self-quarantine last month.

“I appreciate all the best wishes I have received,” Paul, R-Ky., tweeted Tuesday. “I have been retested and I am negative.”
Whoops! We couldn’t access this Tweet.

He added: “I have started volunteering at a local hospital to assist those in my community who are in need of medical help, including Coronavirus patients. Together we will overcome this!”

Patients with underlying respiratory conditions are more at risk for serious health effects due to infection with the novel coronavirus. Paul had lung damage after the attack by his neighbor that left him hospitalized, so this is excellent news.

A traveler to Egypt returned with a coronavirus infection, and had the worst two weeks of her life until she received the malaria-drugs “touted by Trump.” (as our elite media would phrase it).

An Amarillo woman who tested positive for COVID-19 is now considered recovered and is sharing her story in an effort to show others how serious the disease is.

“I was totally out of control, there’s not anything I could do,” said Laura Taylor. “It was the worst two weeks of my life, I’ll just say that.”

…It wasn’t until she was given hydroxychloroquine, a drug used to treat Malaria, that things started looking up.

“After I started taking the Malaria medicine, I started to feel a lot better,” she said. “Like, the next day.”

Kemberlee Kaye reported on President Donald Trump’s tweet in which he threatened to take a good look at the financing of the World Health Organ after its atrocious initial coverage of the Wuhan Coronavirus outbreak.

It appears he may put a hold on the monies, at least according to his statements at the most recent Coronavirus Task Force meeting.

President Trump signaled Tuesday he may put a “very powerful hold” on funding to the World Health Organization as he lashed out at the United Nations specialized agency and accused it of “being very China-centric” amid the coronavirus pandemic.

Reiterating his complaints from a tweet earlier in the day, the president said that the WHO “has been wrong about a lot things.” Trump has been critical of the WHO for opposing the travel restrictions from China and Europe.

“They’ve been wrong about a lot of things,” Trump said during the daily press briefing of the White House coronavirus task force. “They seem very China centric.”

He added: “We’re going to put a hold on the money sent to the WHO.”

Twitter may be the Thunderdome of social media, but it’s good to see its CEO stepping up and helping out.

Jack Dorsey is using his substantial wealth to help tackle the coronavirus pandemic.

Dorsey, who is the CEO of both Twitter and Square, announced on Twitter on Tuesday that he’s created a new fund called Start Small LLC that will be funded by $1 billion in his Square equity. He said it’s about 28% of his wealth.

He’s got big plans once the pandemic is over.

After the coronavirus outbreak has been contained, Start Small will shift its focus to funding girls’ health and education, as well as universal basic income, a regular cash payment made to citizens by the government, Dorsey said.

It’s heartening to see our President demand that allies treat us as if we were allies.

Hours after President Donald Trump warned of “retaliation” if Indian Prime Minister Narendra Modi refused to allow the export of an anti-malarial drug being tested as a possible treatment for the new coronavirus, India said it would supply hydroxychloroquine to “nations that have been badly affected,” without naming the United States or any other country specifically.

“In view of the humanitarian aspects of the pandemic, it has been decided that India would licence paracetamol and hydroxychloroquine in appropriate quantities to all our neighbouring countries who are dependent on our capabilities. We will also be supplying these essential drugs to some nations who have been particularly badly affected by the pandemic,” Indian Foreign Ministry spokesperson Anurag Srivastava said.

To battle COVID-19, India is converting trains into hospitals

India isn’t just ramping up the production of hydroxychloroquine. It’s shut down its passenger train system, which is historic.

When Prime Minister Narendra Modi imposed a nationwide lockdown on March 25, Indian Railways took the unprecedented move of suspending passenger trains across the country until April 14.

It was the first time in 167 years that Asia’s oldest rail network had been suspended.

Now the railway network has decided to convert as many as 20,000 old train carriages into isolation wards for patients as the virus spreads.

The network, which is the world’s fourth-largest rail operator and India’s biggest employer, already operates 125 hospitals across the nation, so has the expertise to expand into mobile beds.

On April 1, India had recorded 4,288 cases of Covid-19, including 117 deaths, according to Johns Hopkins University — a relatively small number for a nation of 1.3 billion. While India’s hospital system isn’t overwhelmed yet, the repurposed trains could ease some of the pressure if the number of coronavirus patients begin to rise.

The question we should be asking is why we’re in a position where we have to twist India’s arm to get these drugs instead of manufacturing them ourselves.

“My short message is please quarantine politicizing COVID” — WHO Director