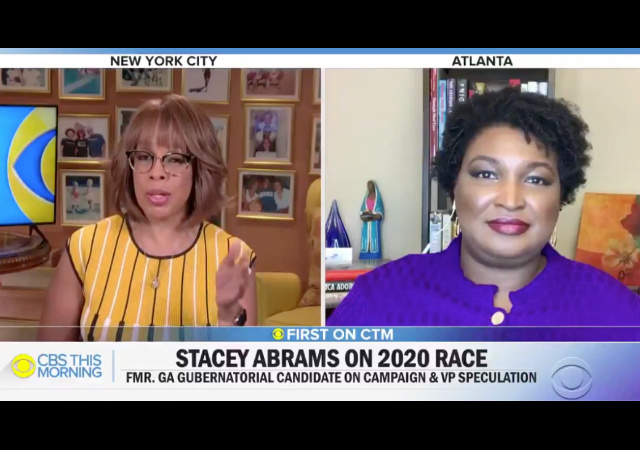 I laughed when Abrams told King that she chose “not to hide my head” when she lost in 2018. Um, ma’am, you have complained and whined about the election being stolen from you.

After Stacey Abrams gives her pitch for why she should be Biden’s VP, CBS News Anchor Gayle King tells her:

Gayle King of CBS This Morning allowed Abrams to list off her supposed accomplishments that prove she has the qualifications.

Except Abrams only concentrated on her social justice work after she lost the gubernatorial race, mainly her “work” to stop voter fraud.

That’s probably because Abrams does not have much experience in government. She served as a member of the Georgia House of Representatives from 2007-2017. Yes, that is quite a bit, but she never moved up.

Then again, President Donald Trump did not have any government experience, and he’s now president of the entire country! But he picked capable people for his team, especially Vice President Mike Pence.

But Abrams showed us her motives in 2019:

King told Abrams she is “extremely qualified” to be vice president.

I wonder if she feels the same way about Trump. I’m thinking no.

Did anybody else notice the picture? Just how long has she been out of the sunlight???