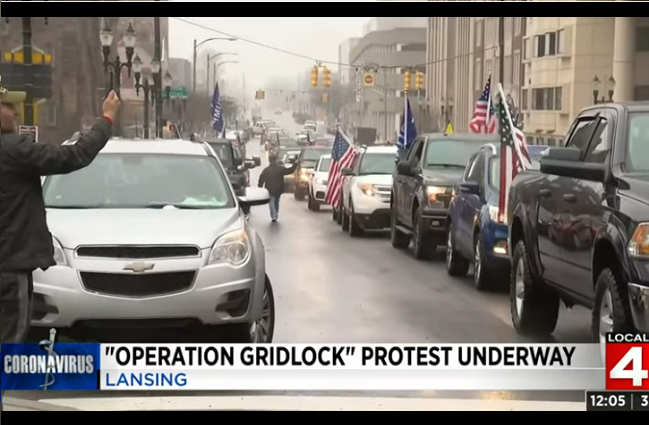 Rebellion was bound to happen in Michigan. The governor there is issuing decrees that make no sense and appear to attempt to take from the people all control of their lives.

This is a losing strategy in America, with our long tradition of freedom and liberty, and Governor Gretchen Whitmer is likely watching her chance to be Joe Biden’s VP disappear as her diktats have enraged the population of her state.

Yesterday, Mary wrote about the planned “Operation Gridlock” to jam Lansing with vehicles in protest of Whitmer’s overreach.

The protest was a resounding success, with cars lined up for miles.

WWJ reports as the “Furious Crowd Gathers At Michigan Capitol To Protest ‘Stay Home’ Order: Lineup of cars extends for miles outside of Lansing.”

Large and raucous crowds showed up in Michigan’s capital Wednesday for what organizers are calling “Operation Gridlock.”

People — in their cars, on sidewalks, lawns and on the Capitol steps — are gathered to protest Gov. Gretchen Whitmer’s “Stay Home, Stay Safe” executive order. Organizers of the rally want some of the restrictions eased, and the state economy re-started.

WWJ Newsradio 950’s Charlie Langton reported it appeared thousands of people were in attendance; the lineup of cars for the protest extended for miles outside of Lansing.

What’s it all about? As debate rages about the intersecting priorities of public health and economic vitality, the Michigan Conservative Coalition called on fed up Michiganders to form a convoy with their vehicles, display signs, make noise and be disruptive.

Those taking part were urged stay in their vehicle and practice safe hygiene. “Cars should be filled with only members of your immediate family. No carpooling since gas is cheap!” organizers told supporters, in a news release. “Stay in your vehicle so that the ‘Whitmer police’ cannot say you are ignoring the ‘social distancing’ order.”

. . . . Organizers are protesting, among other things, what they say is irregularity in the rules that allows “dope shops” to stay open while “cigar shops” are closed. They’re upset that the order applies to all of Michigan, instead of just hotspots like metro Detroit, and argue that amid a pandemic citizens can be trusted to keep themselves safe. “When did one size solve everyone’s local issues?” an organizer of the protest asked. “Governor Whitmer will put you out of business before allowing mere citizens to be responsible for their own behavior. That is madness.”

Meshawn Maddock, Chair of the 11th District Republican Committee and an organizer of the road rally noted that, “numerous outdoor jobs like landscaping, nurseries, excavation and lawn services are shut down. Heart surgeries are banned as non-essential, but abortion clinics remain open. Construction — including some road repair — is shut down, though other neighboring states aren’t doing that.

The protestors are all upset with their governor’s handling of the coronavirus and with her irrational closure orders.

One participant told Langton the loss of jobs is his main concern.

“I have quite a few friends who work in construction, landscaping and lawn maintenance, and they can’t work; yet the state can work,” he said. “People can go to, you know, Walmart whenever they feel like it, and gas stations.”

“The amount of people on the road, it doesn’t seem like that many people are actually staying home, so it seems like we’re just punishing a group of people. So I’m here to protest and get back to work.”

A woman at the rally expressed a similar view. “We have bills to pay,” she said. “The stores open are Walmart? That’s ridiculous; that’s why we’re here.”

Also raising some ire: Easter and Passover services were effectively canceled by a government order. “The madness needs to end before Michigan’s freedoms and economy are damaged beyond repair by power hungry bureaucrats,” the group said.

Here’s more on the massive protest:

Michigan is ready to get back to work #operationgridlock #michigan #Whitmer pic.twitter.com/lK4sXYdsJ8

This #OperationGridlock is looking similar to a Trump rally. There are a lot of MAGA/KAGA attire and flags. pic.twitter.com/zksQJBoWfw

I did not see any blacks in the crowds of people wanting to go back to work. Pondering.

The legislature may not be able to override Governor Wolf’s (D) veto, but they will make him own it.