“Mark my words, I think he is going to try to kick back the election somehow, come up with some rationale why it can’t be held” 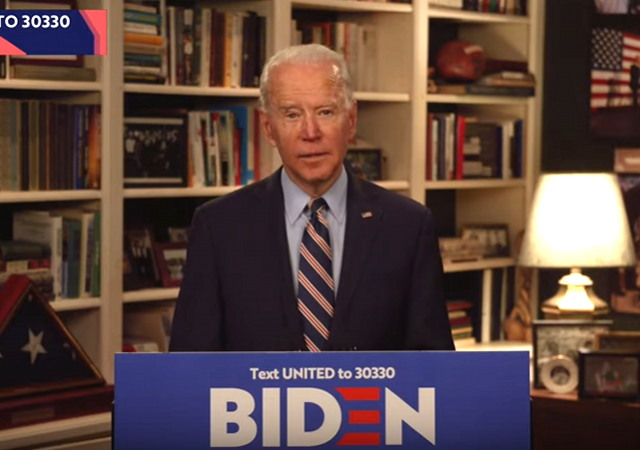 Over the last few years, the media has gotten into the habit of lazily dismissing things as conspiracy theories and accusing people they don’t like of being conspiracy theorists. They have done this to Trump repeatedly.

Now Joe Biden is actively pushing an actual conspiracy theory, and the accusations are nowhere to be found.

Much in the same way that prior to the 2016 election, Hillary Clinton claimed Trump would not accept the outcome, something Hillary went on to actually do, Joe Biden is now claiming that Trump is going to postpone the November election.

He has no basis for making this claim. My best guess is that he is trying to stoke fear among the so-called resistance.

“Mark my words, I think he is going to try to kick back the election somehow, come up with some rationale why it can’t be held,” the former vice president and apparent Democratic presidential nominee said during an online fundraiser.

“Imagine threatening not to fund the post office. Now, what in God’s name is that about? Other than trying to let the word out that he’s going to do all he can to make it very hard for people to vote,” Biden said. “That’s the only way he thinks he can possibly win.”

Trump has not made any comments about delaying the Nov. 3 election, and he does not have the power to do so unilaterally.

The Trump campaign issued a statement Friday, saying, “Those are the incoherent, conspiracy theory ramblings of a lost candidate who is out of touch with reality. Perhaps he also missed the news that the infamous Steele Dossier, central to the Russian Collusion Hoax, was likely compiled with Russian disinformation. That’s the real Russian collusion.”

Biden predicts Trump will try to postpone the election

Joe Biden predicted President Trump will try to push back November’s general election in an effort to help the president win.

“Mark my words, I think he is gonna try to kick back the election somehow, come up with some rationale why it can’t be held,” Biden said during a Thursday evening virtual fundraiser.

The former vice president equated the administration’s lack of enthusiasm for alternative voting options with the 2016 foreign election interference from Russia. “I promise you the Russians did interfere in our election and I guarantee you they are doing it again with two other major actors,” Biden said, adding, “You can be assured between [Trump] and the Russians there is going to be an attempt to interfere.”

The article contains zero mentions of the word “conspiracy.”

The media has picked up this ball and run with it. There are tons of articles on it, and it doesn’t end there.

Biden recently appeared on the Jimmy Kimmel Show, which, like all of the late night shows, has become nothing more than nightly therapy sessions for Trump-haters, and acted as if Trump is already trying to delay the election.

Joe Biden appeared on the latest Jimmy Kimmel’s Quarantine Monologue, Kimmel’s web series substitute as his show has been sidelined because of the coronavirus, and the topic turned to whether President Donald Trump will try to postpone the 2020 election because of the crisis.

“Is it possible that Trump could postpone the presidential election?” Kimmel asked, repeating a scenario that many Democrats fear may happen if the pandemic stretches into the fall.

“No, he doesn’t have the authority to do that,” Biden said. “It is possible they may start a drumbeat saying it should be postponed.” He added that a friend, historian Jon Meacham, pointed out that elections have been held during previous crises, including during the Civil War and World War I and II.

Trump has made no suggestion of postponing the election. This is all coming from the people who are fantasizing that this is something he will eventually do.

This is Trump Derangement Syndrome.

Even Congress, which can postpone the election, can’t do so for long. The election has to be held by late December, because Congress’s own term runs out on Jan 3. And if the electors haven’t elected a new president and vice president by Jan 20, I guess Mike Pompeo becomes president until the electors can meet. (At last, I don’t think he has a limited term, so he’d still be in office while Pelosi would not be.)

Yep, I just checked, department secretaries don’t have fixed term ends. Generally a new president, especially one from the other party, will require all the old secretaries to resign, or else will fire them; but if there is no new president to do that then they would continue in office, which means Pompeo would become interim president.

The way the left has been suspending or trying to suspend many of our rights under the pretext of safety, it would only be logical to suspend the right to vote as well. What say you leftists?

What a doddering old fool.