Damn right it’s an essential activity! Our basic rights do not go away during a pandemic! 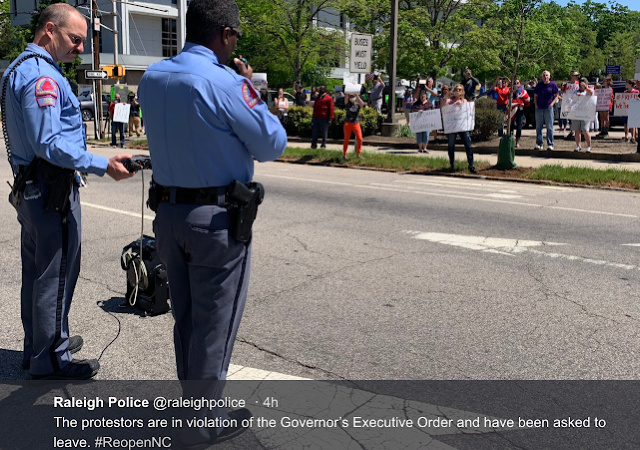 Our Founding Fathers never once said that the rights given to us by our Creator go out the door in the case of a viral pandemic.

In other words, the Constitution still exists and it still protects us from tyrants.

The Raleigh Police Department had the nerve to tell someone on Twitter that protesting is a non-essential activity.

I misspoke before when I said that the Constitution only applies to the federal government. I forgot that the 14th Amendment makes the Bill of Rights applicable to the states through the Due Process clause of said amendment.

So what the actual fuck, Raleigh police?

The protestors are in violation of the Governor’s Executive Order and have been asked to leave. #ReopenNC pic.twitter.com/AIEetS42NE

Protesting is a non-essential activity.

Just in case they delete it and so you can read it again: 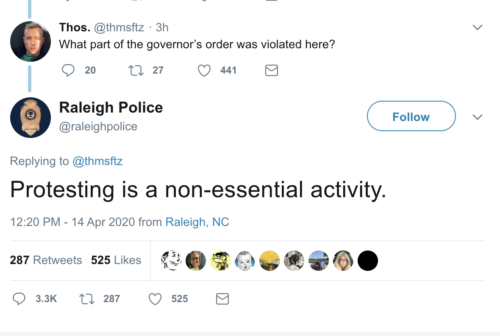 How do I fascism? Where is Occupy Wall Street? Where is Antifa?

More importantly, how the hell do I Constitution?! The First Amendment specifically states:

The right to protest and freely assemble is absolutely an essential activity!

Do you know why the Founding Fathers added the freedom of assembly into the amendment? The tyrannical English monarchy also did not find protesting or freedom to assemble an essential activity. Quaker William Penn faced charges for simply preaching in public in 1670. The jury found him innocent, but it made the citizens realize that they have a right to assemble.

Then right before the Revolutionary War, the monarchy made the British forces use their power to restrict protests after Parliament passed stupid taxes.

The British forces did just that. In 1770 these forces committed the Boston Massacre. The British army quickly ended protests in New York and *gasp* North Carolina.

The monarchy was not blind and knew the colonists could get rowdy. MOAR LAWS. The government tried to discourage future protests by implementing more asinine acts known as the Intolerable Acts here in America: Boston Port Act, Massachusetts Government Act, Administration of Justice Act, and Quartering Act (an expansion of the previous Quartering Act.)

You better believe it pissed off the colonists. Instead of cowering and admitting defeat, the colonists got together and rebelled.

The government at any level has no right to tell us what to do even when it’s supposedly for the common good.

“Assessing the situation.” Bitch, please. People want to go back to work. They want to earn a living and provide for their families.

Americans need to start pushing back against draconian lockdowns and socialist governors/mayors who initiate and enforce them. The herd mentality that has swept the nation and imprisoned Americans across the country does not have the proper evidentiary basis, and the precedent, if left unchallenged, can and will be abused in the future. Public outcry should be widespread and loud. Time to get rid of these socialistic governors who take away your rights and freedoms documented in the Constitution and Bill of Rights. Our Country fought hard for these rights and I will be damned if these communists can take it away. People can be responsible for themselves and make their own decisions and we do not need a fraudulent press supporting fake models that lack verifiable support to assist the socialistic agenda! The coronavirus threat and the unfounded hysteria that has accompanied it will pass. But the specter of a pandemic offers a timely warning to remember that we are not necessarily any more immune from volatile nature—and humankind’s paranoid response to it—than were the ancients.

LOL! I should have added Texas to the list of states with idiots who think the Civil War was about “States Rights” or that these monuments honor bravery. Much as I love Texas, there are a whole lot of crackers there too.

These statues don’t honor “bravery”, they honor a South that was wished to “rise again”. The vast majority of them were erected by organizations such as Daughters of the Confederacy and other racist organizations wishing for a return to pre-Civil War life. They were erected as the defeat of Reconstruction was completed and the old Confederacy sought to impose Segregation upon the South in perpetuity.

Those statues are a slap in the face of every descendant of slaves in America. Same with so many of the State flags in the South in the 1950s being modified to include a version or an aspect of the Confederate battle flag. The South has several centuries of shameful history. It appears to still be there.

If these monuments honor bravery on both sides, why are there no monuments to Union soldiers in the South? Huh? HUH?

Content yourself with your self-delusion if you wish. But as to “honor and bravery” you haven’t the foggiest notion of me or my life, so probably best you not keep making a fool of yourself by opening your yap again.

Whose family owned slaves at the start of the war? Lincoln or Davis?

Which general most recent to the start of the war was a slaveowner? Grant or Lee?

Which side funded (pre-war) 85% of the federal government while receiving 15% in return?

Nice playing with you. Study history and then come back to get you rear handed to you again.

Ah, another Cracker Defender heard from! You were certainly looking in the mirror when you cast that “moron” invective.

Lincoln never owned slaves. While he was born in KY, a slave state, he personally did not have them. That cracker fool Davis? Who cares? – his sin was complete with leading the confederacy.

Lee had slaves and was a cruel master. Attempts by revisionists to create a mythology about him have been debunked. Here is an interesting article you might appreciate (but I doubt it):
https://www.theatlantic.com/politics/archive/2017/06/the-myth-of-the-kindly-general-lee/529038/

Grant did have a single slave before the North beat the ass of the South in the Civil War. And he freed that slave in 1859.

I haven’t the foggiest idea what the South paid to the federal government, if indeed it paid 75% as you imply. Whatever those crackers paid was off the back of brutalized slave labor, under the cracking whip of the Cracker masters. To take some sort of pride or justification in that is truly a sign of a deranged understanding of the history of Cracker Nation.

And it is also interesting that you choose a few anecdotes to attempt proof of something – though we are not sure what. You failed. You missed the point of the depth of racism that pervaded ad still is embedded in the South. The confederate flags, Segregation, etc.

You can stop playing with yourself and think a bit more. Otherwise, go for it, cracker. But just remember, your attitude is what gives Republicans and conservatives a bad name and a racist label.

Hundreds of thousands of Southerns lost their lives in the Civil War. The statues are in their honor and were erected by the families of the lost. If your going to start tearing down statues of slave owners, then don’t forget Thomas Jefferson and George Washington. I love all of American history, and none of it should be erased for political correctness. Learn it and respect the past, even the ugly parts of it.

“Lincoln never owned slaves. While he was born in KY, a slave state, he personally did not have them.”

I never said Lincoln personally owned slaves, so either 1) you can’t read for comprehension, 2) you purposely avoided answering the question, or 3) your stupid. I’m going with door #3 with a heavy helping of door #1. Now you may try again. Read carefully. Do a bit of research. LOL, yes I know all this is impossible for a half wit.

“Lee had slaves and was a cruel master. Attempts by revisionists to create a mythology about him have been debunked.”
“Grant did have a single slave before the North beat the ass of the South in the Civil War. And he freed that slave in 1859.”

Lee never owned slaves, his father in law did. Upon the father in law’s death (1857) his instructions were to free them all within 5 years which Lee did. All were freed by 1862. Grants wife claimed several servants through 1862, though ownership is unclear. Her father purchased the slaves and transfer of official ownership is uncertain. Grant managed his father in laws farm for 5 years just prior to the civil war.

“I haven’t the foggiest idea what the South paid to the federal government, if indeed it paid 75% as you imply.”

Of course you don’t. You don’t know anything about history. And it was not “75%”, it is 85%. There is that reading comprehension thingy again. Did Lincoln and congress increase further tariffs that largely fell on the South? Why yes they did. What was the effect on the Southern states?

If you really wish to know what the Civil War was over read the literature of the period from Europe.

“And it is also interesting that you choose a few anecdotes to attempt proof of something – though we are not sure what.”

Do you know the meaning of “anecdote”? Would you care to share a “few anecdotes” that I used just for the humour? Consult a dictionary first.

“Cracker”
A racist term. Which makes you a racist.

Northern states were slave states for many years. The underground railroad ended where? At the Mason – Dixon line or Canada?

call the waaahambulance !!!! another tiresome ” victim ”
grow-up and face it–millions and millions of people alive in this country during the civil war didn’t give a damn about slavery–and even more millions that are alive now don’t either

btw–looks like you’re the one using the racist labels

lol–must be usin mamma’s computer in the basement

It’s both astonishing and disappointing that the police would enforce a dictate that was so obviously unconstitutional. I’m sorry to see it happen in my time.