“Hating Trump is not an excuse for lazy argumentation and emotional reasoning.” 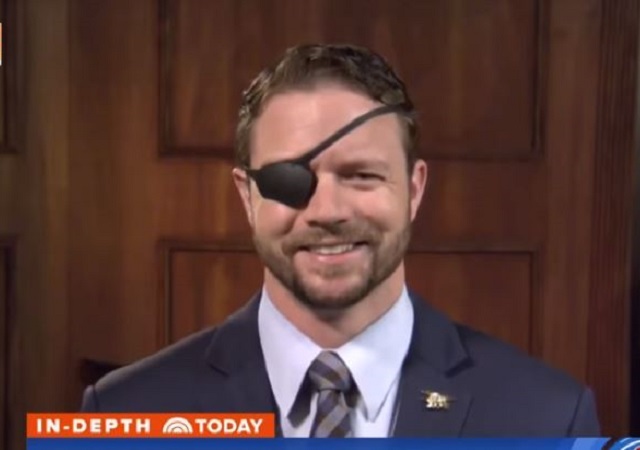 Severe TDS-sufferer Jennifer Rubin tried to argue that President Donald Trump’s inaction on the Wuhan coronavirus led to the death of thousands of Americans and basically destroyed the country.

Thankfully, Rep. Dan Crenshaw (R-TX) came in with a cool head and tweeted out the much-needed facts when it comes to Trump’s response to the Wuhan coronavirus.

I swear The Washington Post publishes pieces from Jennifer Rubin just so people can laugh at her. There is no excuse to publish pieces not laced with facts just because someone is an opinion writer or blogger.

Here are a few of Rubin’s tweets with her article. Whenever she talks about coronavirus it seems that she leads with Trump. She has even called the coronavirus death toll the Trump death poll. Not kidding.

the Trump toll, when we are done, will likely include tens of thousands of unnecessary deaths, massive unemployment, trillions of dollars more in debt and trillions of dollars in lost wealth not to mention emotional hardship and educational disruption https://t.co/piGNbudj0G

We now can calculate how many thousands Trump killed by inaction. Then there is the economic damage https://t.co/piGNbudj0G

Now we know- tens of thousands of lives and trillions lost = The Trump Toll https://t.co/piGNbudj0G

First of all, the Wuhan coronavirus is a VIRUS. It does not give a crap how a government responds or who is in charge.

Plus all of these arguments are null and void because the virus was likely already in America since November. Remember, I swear that I had it in late December/early January.

Instead of attempting to spin the public into a hateful, frightened frenzy, let’s try reporting some facts with the correct context. Here’s what that might look like:

The left all of a sudden seems to love WHO now that he cut the funding to the organization. They forget that WHO downplayed the virus in March.

On March 3rd, the day after you claim Trump should have shut our economy down, this is how the WHO downplayed the virus:

“COVID-19 spreads less efficiently than flu, transmission does not appear to be driven by people who are not sick”https://t.co/BNWzEViKJn

The answer is no. It’s only been what, four weeks? People already want to go to back to work.

Would the America public really have accepted millions of jobs destroyed for a virus that had infected just 102 people by March 2? Especially considering Italy would not lock down until March 10th, Spain on March 14th, and the UK on March 23?

A bit of context is in order here.

Yes, the precious federal government’s regulations, which have been in place for a looooong time, prevented others from getting out coronavirus tests:

“Because we did not act earlier to ramp up testing at a massive scale and prepare our health-care system, social distancing — shutting down most of the economy — was required.”

Not sure where the magic COVID-19 testing switch is. The truth is that long-standing regulations – in place for decades – prevented us from doing so. https://t.co/fDtnnbLg0i

Additionally, you falsely state that social distancing should have been a “last resort.” But this has no basis in fact. Experts have long said flattening the curve via social distancing is the only way to prevent the initial case spike that would overwhelm hospitals.

Like most TDS sufferers, Rubin wants to have her cake and eat it, too.

Which is it? You can’t have it both ways.

Your analysis makes it seem like our government deliberately decided not to buy more PPE. The truth is there was a global production shortage when China began stopping exports, and demand soared. This is still happening.

WEIRD how Rubin forgets that her own paper and the other MSM downplayed the virus.

While you argue that Trump ignored early warning signs, you ignore the headlines that ran on the pages of your paper in January and February. Here are a couple: pic.twitter.com/mESRoVydtq

When it’s all said and done, this bad-faith analysis isn’t fact-based and lacks important context. Hating Trump is not an excuse for lazy argumentation and emotional reasoning.

Now, more than ever, we need critical thinking and productive deliberation.

Love this man. He’s a fighter. We have a few now, thank goodness.

It’s obvious to me, many, probably most of the over 80 cases are *nursing home cases.* Those places have to be pits of contagion. My son tells me half of the new cases in St Charles County, MO last week were at *one* nursing home.

Why not clean those places up and let people work if they want to? People are at risk of losing everything. It makes me really angry to think they are doing this because of some hyped up crap model from some idiot Brit, and media frenzy for bad news. I see how Trump and many governors (including MO gov, who resisted as long as he could) can’t resist the shrieking about DEATHS! So I’m not blaming.

However, I do believe it is time for some resistance and pushback. A lot of this is plain damn tyranny. I was thrilled to see that protest in Michigan. Made my Murrican heart beat that little bit faster.

At least one of our 6 county deaths involved an individual under hospice care. Calling that a COVID death is malpractice.

I am 76; systems are deteriorating. Such is life.

Seriously, what is wrong with her? She and I started from what I thought were the same premises. Four years ago we seemed to be on the same page. At least I thought so. But then Trump was elected, fair and square, and started doing mostly good things, and it seems like the more good he did the more her hatred blinded her to it.

I kept my eyes open, and observed what he did. When he did something I didn’t like I criticized him. When he did something I did like I praised him. And when he was unfairly attacked I defended him, just as I defended those whom he had unfairly attacked. I didn’t vote for him in 2016, but if the election were held today I would vote for him this time.

Meanwhile Rubin seems to have just turned into a hate machine. It’s as if she can’t bear to see anything good about him, so her subconscious turns it into bad and she believes that. Maybe Bandy X. Lee has a name for that.

The truth is Trump’s handling of this crisis has not been perfect. But who could expect that? I don’t believe any alternative president could have handled it any better than he has. He’s done the best he can, and the best anyone could have done, given the information we had (thank you China). If he didn’t deserve reelection before (and he did), he would earn it just for this.