It wasn’t just the distruption of Senate negotiations which were close to conclusion. The alternative bill Pelosi put forward is the extortionist’s price for the release of your loved ones. 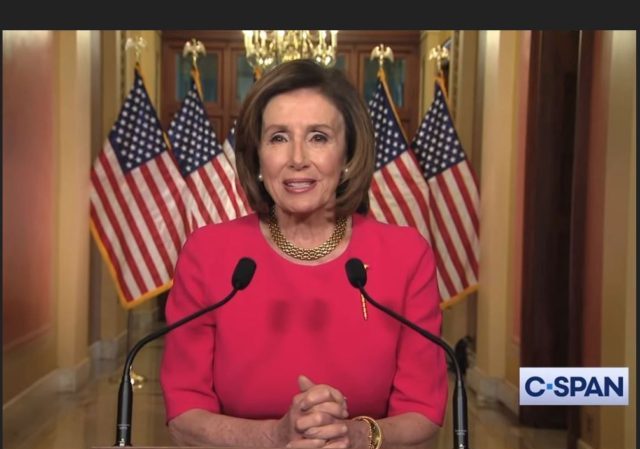 Nancy Pelosi, with a major assist from Elizabeth Warren and the capitulation of Chuck Schumer, scuttled Senate negotiations Sunday over a rescue bill to help people left unemployed and businesses at risk of collapse from a government-ordered economic shutdown in response to the Wuhan coronavirus pandemic.

Pelosi’s move, at so many levels, is so outrageous, it could become a spark that sets a national fire.

It wasn’t just the distruption of negotiations which were close to conclusion. The bill Pelosi put forward is a liberal laundry and wish list of things they know they could not get enacted unless the nation were in a vulnerable position. It’s the extortionist’s price for the release of your loved ones.

I don’t think Pelosi and many other Democrats are aware of the fury they are about to unleash in the nation.

I think Chuck Schumer, for all my criticisms of him, understands this, which is why there still is a chance of a Senate deal being reached despite and without rewarding Pelosi’s extortion.

It’s getting hard not to hate.

This is Coup 3.0. Combining national same-day registration and national Vote by Mail is an attempt to subvert the election, the way the Democrats did in California in 2018. It will allow massive numbers of untraceable fraudulent ballots to be issued, marked and delivered in every key battleground state, and since it would be a federal program kicked off by Pelosi’s House it will be a complete cluster-buck in terms of transparency and accountability.

This is how they turned CA pure blue, and how they took all of Colorado, beyond the colleges. This is their hail Mary pass to try and win the next election, by hook or by crook.

This Must Not Stand.

I swear! The house and senate republicans better not give an inch on this bullsh#t. I dont know about everyone else but my hatred of democrats is so strong that I want to see them in physical pain. The dems and their media have shown beyond any doubt, that they are owned by the Chinese. They are traitors and should be treated as such!

I’m surprised she didn’t add free train rides to the FEMA camps for all Trump supporters and save money by putting us two to a coffin.

Piglosi is a despicable person.
Shame on San Francisco if she gets re-elected.

“It’s getting hard not to hate”

Why bother, they hate us and want us dead or in their detention/reeducation camps. We’re getting ever closer to that spark that will start the conflagration called “2nd American Civil War”. I honestly expect it will start from Leftist violence…