NY Times reporter: “disdain for and distrust of the media right now is worse than I’ve seen at any point throughout this presidency”

NY Times reporter: “disdain for and distrust of the media right now is worse than I’ve seen at any point throughout this presidency”

What did you expect from exploiting a public health crisis to help Democrats, and using false accusations of racism as a cudgel? 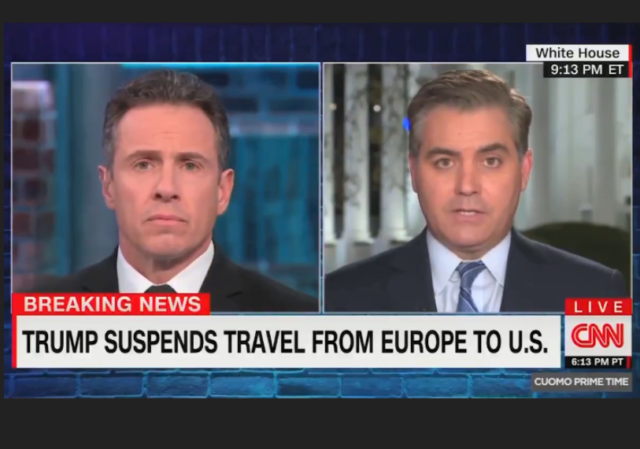 Can you feel it? I certainly do.

There is a rising fury at the blatant media exploitation and weaponization of the Wuhan coronavirus pandemic.

There is no better example of the shamelessness of the media than how “Wuhan coronavirus” or “Wuhan virus” or “Chinese coronavirus” have all been declared to be racist because used by Trump or Trump supporters.

Boy, this is embarrassing. https://t.co/YaML6FPR8z

There also is a media push to weaponize the crisis to defeat Trump. The same people who screamed that the restrictions on travel from China imposed over a month ago were racist and xenophobic all but ignore that the restriction is credited with substantially slowing down the spread of the Wuhan coronavirus to the United States, buying important time.

Have been talking to lots of Trump supporters across the country these last couple of days, and the disdain for and distrust of the media right now is worse than I've seen at any point throughout this presidency.

The thousands of responses to her tweet are instructive.

The media politicized and weaponized the virus to the point that they crashed the economy. Of course, the disdain is real and warranted.

Of course people are furious. I see it in the comments here, and on social media. People are sick of the media serving as the water boy/girl for Democrats, and of making false accusations of racism as the cudgel.

We remember how you threw the election to Obama, twice, and how you tried to throw the election for Hillary but barely failed. We remember Russia collusion, Kavanaugh, and so many other situations where the media feeding frenzy creates a permanent crisis news cycle designed to help Democrats.

You and your compatriots are part of the problem, and as inexcusable as it was on all those political topics, to do it again with a serious public health threat is so far beyond the pale that people are ready to burst with anger.

But you don’t see it most of the time. When you go on safari to observe the half the population that voted for Trump, you are shocked.

“What did you expect from exploiting a public health crisis to help Democrats, and using false accusations of racism as a cudgel?”

Your subtitle explains it all. The media has made themselves a purveyor of “fake news”. Now they get the harvest of their planting, and it is like “we don’t know how these weeds came up just where we planted seeds”.

If you follow the polls on the media truthfulness, you will note that it has fallen steadily since people started to get alternate news on the internet. Not because they are lying more now, just because they are caught more and more in their lies.