President Trump supports the “right of Greece to enforce the law on its borders.” 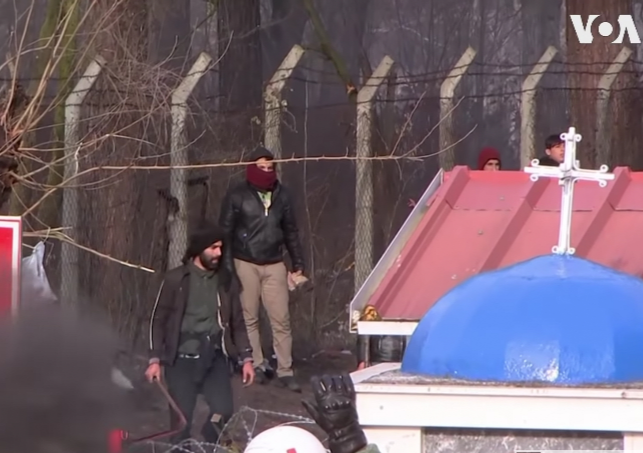 As thousands of illegal migrants force their way into Greece along its border with Turkey, a senior Greek minister has described the worsening situation as an invasion.

“This is an invasion,” Greek Development Minister Adonis Georgiadis said on national television.

The hoards of migrants are heading into Greece by both land and sea. While 10,000 thousand migrants were amassed at the land border with Turkey and fought, pitched, and battled with the Greek border police, more than 1,000 migrants landed on Greece’s Aegean Islands since Sunday, Greek authorities said.

“Greece accuses Turkey of orchestrating a coordinated effort to drive migrants across the frontier,” Reuters news agency reported on Tuesday. “One Greek policeman accused Turkish soldiers at the Kastanies border gate of “giving cutters” to migrants to cut holes in the fence to get through. Reuters could not verify the report,” the news outlet added.

The migrant influx began after Turkey opened its border, encouraging migrants — mostly men from the Middle East, Afghanistan, and Pakistan — to cross into Europe, even providing free bus rides to the border crossings.

In the face of this massive migrant wave, the Greek government remains defiant.

“We will not be blackmailed and no one will cross the border illegally,” Prime Minister Kyriakos Mitsotakis told locals as he toured the eastern border.

Greece police fired tear gas to contain the marauding migrants, comprising mostly young men. In one instance, the coast guard fired could be seen firing warning shots towards a migrant boat to deter it from breaching Greek waters.

The Associated Press reported the migrant crisis escalating on the Greece border on Tuesday:

Thousands of migrants searched for ways to cross Greece’s border with Turkey Tuesday, as Athens ramped up its diplomatic efforts to get help from the European Union to seal off its eastern land and sea frontiers.

Turkey has made good on a threat to open its borders for those seeking to cross illegally into Europe. Many of those hoping to enter Greece were trying their luck by wading or rowing across the Evros River that runs along most of the length of the Turkish frontier.

The action by Turkish President Recep Tayyip Erdogan triggered days of violent clashes and scenes of chaos at the border. Greece has struggled to push back the wave of migrants, with its armed forces now leading the effort.

“We will not be blackmailed and no one will cross the border illegally,” Mitsotakis said after being greeted by residents in border areas who clapped and chanted his first name.

The government has accused Turkey of causing a risk to is national security and has imposed emergency measures to carry our summary deportations and deny migrants the right to apply for international protection for one month.

The Greek army and navy held live fire exercises across the eastern border areas for a second day Tuesday to reinforce its message of deterrence. Frontex, the EU border protection agency, said it was finalizing plans to send additional resources to Greece, while several individual EU members. including Austria, have also offered additional support.

“Greek coastguards had been filmed pushing away a dinghy with poles and opening fire into water in an effort to block migrants from entering the country,” the left-wing British newspaper Guardian complained.

Diplomatic support came from the United States, with President Donald Trump recognizing the “right of Greece to enforce the law on its borders,” in a phone conversation with Mitsotakis.

“The reckless measures being taken by the Greek authorities are a blatant breach of E.U. and international law that will put lives at risk,” Amnesty International complained. “Greece continue[s] to reinforce its borders, rushing elite forces, more soldiers and extra guards, to its eastern Aegean islands and the land frontier it shares with Turkey,” the UK newspaper reported as if this was an illegal or an immoral act.

Despite the commendable effort by the Greek security forces, there are signs that they may not be able to withstand the relentless migrant wave for long. Athens has called for reinforcements, urging the European Union to dispatch the “rapid border intervention force” to protect the country’s borders.

“The borders of Greece are the external borders of Europe,” Mitsotakis reminded Brussels. No EU reinforcements have yet reached Greece, media reports indicate.

Astonishingly, the EU can’t get its act together. It has made countless promises not to allow the repeat of the 2015 Migrant Crisis when millions of illegal immigrants crossed into Europe, leading to a surge in migrant crime and a series of deadly Islamic terror attacks. No lesser figure than German Chancellor Angela Merkel gave her word that “2015 will not repeat itself.”

With another migrant crisis of the same magnitude unfolding before our eyes, the European political class is losing the last shred of credibility that it may have had.

If you believe this to be an invasion, then treat it as such. The Muslims, not known for “playing nice with others,” mean business. You’ll have to show them, and Erdogan, you too are in the business of protecting your land.

It would be pretty. It never is when dealing with Muslims. But let me ask this, “If today’s price is high, do you think the price will be less tomorrow?”

Greece needs an “Operation Wetback” like Eisenhower had in the 1950’s. Actually, we need “Operation Wetback II” now as well. And this is invasion, and the consequences for future generations of Greeks are enormous. So I support repelling and dealing with this with as much deadly force as necessary. The leftists and the Pope will whine … but let them.

It’s long, but worth reading as to what has to be done,

[Found at the beginning,]

Perhaps we will need to resolve the war within the West before we can win the war against the West. When Westerners such as Polish king Jan III Sobieski led their troops to victory over the Turks in the 1683 Battle of Vienna, they fought for a number of reasons: Their country, their culture and their religion, among other things. People don’t just need to live, they need something to live for, and fight for. We are against Islam. What are we for?

I would suggest that one thing we should fight for is national sovereignty and the right to preserve our own culture and pass it on to future generations. We are fighting for the right to define our own laws and national policies, not to be held hostage by Leftist Utopians, unaccountable NGOs, transnational progressives or self-appointed guardians of the truth.

As Muhammad himself said, “War is deceit.” What is the purpose of deceit in warfare? It is to undermine the enemy’s resources and efforts that might be put towards resisting defeat. The word “undermining” itself comes from a practice of warfare: digging mines beneath an enemy’s walls, then burning out the supports for those tunnels dug beneath the enemy’s own assets in order to bring them crashing down.

That is the real war waged by the Marxist/Islamic alliance, a war of undermining the very belief that there is anything to resist, or that there is anything truly worth preserving by resistance. Everything we see now, from the grooming gangs and migrant invasions to state-sponsored broadcasts denying the exceptional nature of Western civilizations and screeching mobs demanding such notions as “gender is a spectrum” be treated as the One Holy Truth, is a product of that war and the ground our destroyers have gained over decades of successful deceit.

The more deception one has swallowed, the more acceptable one has become.

It’s time we call it what it is.

It is World War 3 since fall of Russia, and the Globalists with their Middle East Allies WARRING on Western Civilization.

I’ll believe Greece’s claim that this is an invasion when Greece acts as if it’s an invasion. Invasions are repelled with deadly force. That’s the only response that’ll cause the Muslims to change their behavior.

At your neck or at your feet. Those are the choices.

“This is an invasion,” Greek Development Minister Adonis Georgiadis said
Which means it’s an act of war by Turkey. SO DEAL WITH IT AS SUCH.
Or have you already capitulated to them?

It’s a “human wave assault”. Throwing more bodies at a position than the defenders have deadly deterrants (or in this case, willingness to use them). A violation of the Geneva conventions, because it weaponizes non-combatants.

Hopefully this will solidify the opposition to muslim immigration and submission but i doubt it.

Yet another Greco-Turkish War would be a big deal. Expensive, too, especially considering that Greece is basically bankrupt. And it would doubtless give Russia a good excuse to gets its fingers into Balkan affairs again.

Greece did OK against Turkey in the Balkan War (1912), not so well in the Greco-Turkish War (1922), and of course the dispute over Cyprus has festered for years without resolution.

However, Greece may have no choice. I think it’s pretty certain that the EU will do nothing useful.