Warren announced eight preconditions, most of them unrelated to the crisis and some permanent, she wants imposed on the airline and other industries receiving federal assistance to survive the government-imposed coronavisus shutdowns. 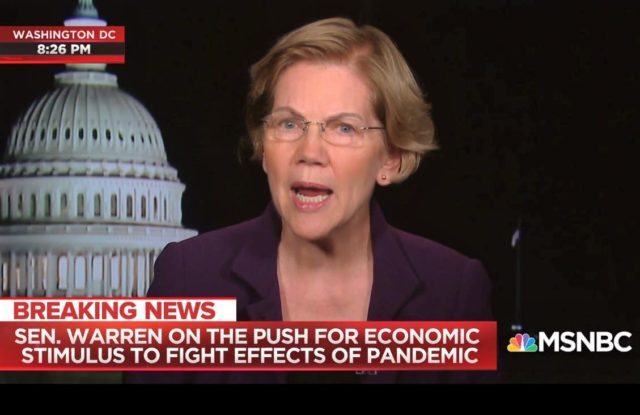 You never want a serious crisis to go to waste. And what I mean by that [is] it’s an opportunity to do things that you think you could not before.

Elizabeth Warren is taking that to a new level, proposing to hold saving the airline and other industries hostage to corporate governance changes unrelated to the crisis.

One of Warren’s core campaign plans was the Accountable Capitalism Act, which would impose sweeping changes on corporate America.

The reforms, published in August 2019 when Warren was rising in the presidential polls, were explained by Warren in a Wall Street Journal Op-Ed:

The Accountable Capitalism Act restores the idea that giant American corporations should look out for American interests. Corporations with more than $1 billion in annual revenue would be required to get a federal corporate charter. The new charter requires corporate directors to consider the interests of all major corporate stakeholders—not only shareholders—in company decisions. Shareholders could sue if they believed directors weren’t fulfilling those obligations….

My bill also would give workers a stronger voice in corporate decision-making at large companies. Employees would elect at least 40% of directors. At least 75% of directors and shareholders would need to approve before a corporation could make any political expenditures. To address self-serving financial incentives in corporate management, directors and officers would not be allowed to sell company shares within five years of receiving them—or within three years of a company stock buyback.

For the past 30 years we have put the American stamp of approval on giant corporations, even as they have ignored the interests of all but a tiny slice of Americans. We should insist on a new deal.

Warren’s legislative proposal received glowing reviews in liberal media, such as Vox, but Warren stood little chance of federalizing corporations and defeating shareholder rights, even if she became president. With the collapse of Warren’s campaign, the corporate reforms of the Accountable Capitalism Act faded from public view.

But Warren has found a new vehicle to push the corporate reforms: The potential bailout of the airline and airplane manufacturing industries. While no specific details have been announced by the Trump administration and Congress, it appears that there will be sustantial cash infusions and corporate loan guarantees by the federal government to prevent the collapse of these critical industries. The collapse comes not from bad business models, but from restrictions on travel and gathering imposed by federal, state and local governments.

The government has cut off the revenue spigot for these companies in the public health interest, collapsing the normal business cycle. When we come out of this health crisis, these travel industries will rebound, but only if they still exist. So it’s a national priority to make sure the airlines and Boeing don’t go under.

Warren is using this crisis and possible bailout to push her corporate reforms as a precondition to saving the airline industry. She announced eight preconditions that she wants imposed on industry, most unrelated to the current crisis and several imposing permanent structural change:

We’re not writing blank checks to giant corporations. Any taxpayer dollars that go to help big businesses during the coronavirus crisis should come with the following minimum requirements:

1. Companies must maintain their payrolls and use funds to keep people working or on payroll.
2. Companies must provide a $15 minimum wage within one year of the national emergency declaration ending.
3. Companies are permanently prohibited from engaging in share repurchases.
4. Companies are prohibited from paying out dividends or executive bonuses while they are receiving any relief and for three years thereafter.
5. Companies must set aside at least one seat – but potentially two or more, as the amount of relief increases – on the board of directors for representatives elected by workers.
6. Collective bargaining agreements should remain in place and should not be reopened or renegotiated pursuant to this relief program.
7. Corporations must obtain shareholder and board approval for all political expenditures.
8. CEOs must be required to personally certify a company is in compliance and face criminal penalties for false certifications.

Congress must set up an oversight body, modeled on the Congressional Oversight Panel and the SIGTARP program for the bank bailout, but with real funding & subpoena power. We need real accountability to make sure these conditions are met.

In other words, Warren is holding the national interest in saving critical industries from collapse hostage to her corporate reform proposals, most of which are unrelated to the crisis.

Is it any wonder even her home state Democrat voters rejected her in the primaries?

I can’t stand Warren and her policies have no place in this proposed bailout but I must sharply disagree with this statement:

“The collapse comes not from bad business models, but from restrictions on travel and gathering imposed by federal, state and local governments.”

This may be true for airlines and is certainly true for many of the suppliers to Boeing and Airbus but Boeing itself is in this position because of gross mismanagement under Dennis Muilenburg who is quite possibly the worst CEO in the history of corporate America and a spineless board that let him run this great company into the ground.

Start with the decision to build a new mid sized commercial jet (737 MAX) using a fuselage that dated back to 1967 which when paired with modern jet engines created issues requiring the introduction on the MCAS software to prevent the airplanes from stalling in a climb.

Then they paired the crap software with a single sensor prone to failure which led to the deaths of over 300 innocent people. Muilenburg had one objective… build planes that don’t crash ad Boeing would be predictably printing money for 20+ years barring some exogenous shock (like a global pandemic). But the company failed miserably.

The MAX debacle put the company in a position where it couldn’t survive another shock such as a 9/11 type attack or a pandemic.

If (more likely when) this company gets bailed out the taxpayers better take ownership and look to recoup our money in 5-10 years via an IPO.

Muilenburg’s decisions were largely driven by regulatory incentives. A 1967 fuselage doesn’t need new and very expensive certifications, nor does reusing sensor configurations and avionics, however unreliable their failure modes may be.

Didn’t she die or something? Or is this her zombie corpse?

Warren’s behavior here matches exactly the behavior of the Chinese Communists who withheld information about the Corona virus for political reasons.

Okay, she is a member of the minority party in the Senate. How does she expect she can even get a hearing on her crazy ideas, let alone get them passed into law?

Individually, Senators have a lot of power.

I’m sure she can leverage it to obtain something.

Can you believe people didn’t want her screeching at them for the next 4 years?