He faces up to 25 years in prison. 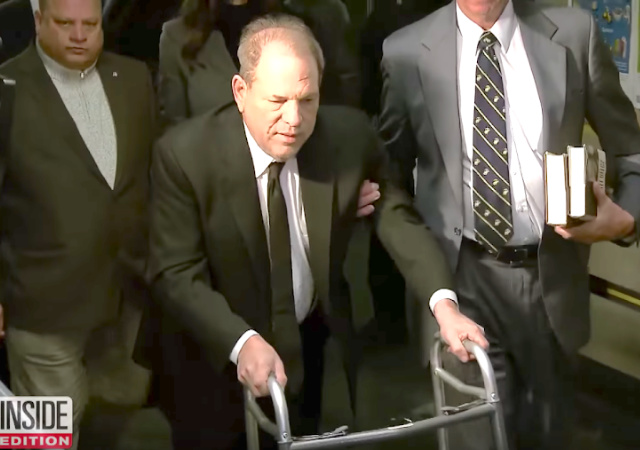 Accusations against Weinstein became public in the fall of 2017, which spawned the #MeToo movement. Actresses told their stories to The New York Times and Ronan Farrow.

He was found guilty of criminal sex act for assaulting production assistant Mimi Haleyi at his apartment in 2006 and third-degree rape of a woman in 2013. The jury found him not guilty on the most serious charge, predatory sexual assault, that could have resulted in a life sentence.

The jury of seven men and five women handed down the on Monday after five days of deliberating.

Weinstein has maintained any sexual encounters were consensual.

Weinstein did not testify even though he wanted to. Reports say his team decided against it to avoid “the risk of prosecutors” going after him on cross-examination.

Weinstein’s lawyers probably felt that way because two of the victims kept in touch with after the assaults.

The rape victim, who remains anonymous, acknowledged “she had a sexual encounter with him more than three years afterward.” She also sent him “friendly and sometimes flirtatious emails.”

The lawyers caused the woman to break “down in tears on the stand.” She explained she sent those messages “because she was afraid of his unpredictable anger and ‘I wanted him to believe I wasn’t a threat.'”

Women have described Weinstein as Jekyll and Hyde. While he appears interested in your career it’s all a show to get women alone in a room. One woman said she turned down Weinstein, who then ‘sneered, ‘You’ll never make it in this business. This is how this industry works.'”

…And here he is, walking out of the courthouse.

That was the “perp walk” on the day he surrendered and was arraigned. NYPD do not have jurisdiction on remands from the courtroom….NYS Court Officers took custody of him in the courtroom and he was transferred to the City Department of Corrections in the basement of the Courthouse.
All things considered, I don’t think he’s that good an actor to sustain the charade while on Rikers Island.

Thanks for the correction.

That idiot Napolitano on Fox has been babbling about the conviction on two counts as a “major problem” for the prosecution. He is so wrong so often that a broken clock would provide better legal analysis. A know-it-all, poseur layman like Milhouse in the comments section of this forum might even be wrong less frequently.

The prosecution had a big problem with the facts in the case in that the women did not, among other things: (1) immediately accuse Dirty Harvey of rape; (2) file a report with police, go to the DA, or hire counsel; (3) go to a hospital or doctor and have rape kits prepared to preserve physical evidence; and (4) they socialized and interacted with him after the fact in a manner that is inconsistent with a hostile act of rape and severe physical and emotional injury from the same. But the prosecutors still managed to convict him on two counts that could send him to prison for 25 years plus, which would amount to a life sentence for a 67 year old man.

It was a big win for the prosecutors because their case had a lot of warts on it and a big loss for Weinstein who is absolutely ruined and may die in jail. Plus, Weinstein has to stand trial on other criminal counts and this conviction will adversely affect sentencing and incarceration if convicted in that case.

He was convicted of being a despicable person. Everything else was just window dressing for revenge.

Bingo. Charges brought outside many states’ statute of limitations (14 and 8 years ago), with inconsistent testimony at variance with their following behavior, and the prosecution allowed to bring forward witnesses from as long as *20+* years ago.

I can’t imagine defending myself against a criminal charge that happened over a few years ago, max.

This was a power move to take down the King. On a plus note, those who are now stepping into his shoes got there this way and not through competence, which means that the great movies which he backed and produced will no longer be made, and those in Hollywood who conspired to take him out will now end up in a worse position than before, with much less money coming their way.