Harvard’s use of “a nebulous and entirely subjective ‘personal rating'” for applicants “has repeatedly penalized one particular racial group: Asian Americans” 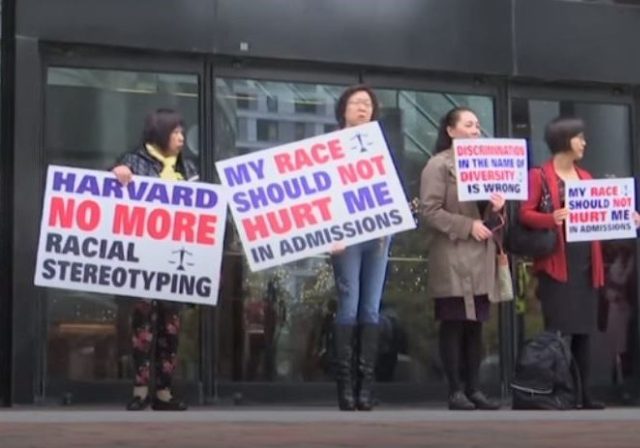 Harvard University discriminates against students of Asian ethnicity in admissions. That much is beyond doubt.

Harvard is far from alone. Study after study have shown that Asian students need to outperform other students, particularly other non-white minorities, on standardized tests and grades in order to obtain admission.

The use of these soft factors has been boosted by U.S. Supreme Court decisions upholding discrimination in the service of diversity. The argument is that diversity adds to the educational experience, so some discrimination to achieve that supposed educational end is permitted, as long as it’s not too blatant.

A university is in large part defined by those intangible “qualities which are incapable of objective measurement but which make for greatness.” Sweatt v. Painter, 339 U. S. 629, 634 (1950). Considerable deference is owed to a university in defining those intangible characteristics, like student body diversity, that are central to its identity and educational mission. But still, it remains an enduring challenge to our Nation’s education system to reconcile the pursuit of diversity with the constitutional promise of equal treatment and dignity.

In striking this sensitive balance, public universities, like the States themselves, can serve as “laboratories for experimentation.”… The University of Texas at Austin has a special opportunity to learn and to teach. The University now has at its disposal valuable data about the manner in which different approaches to admissions may foster diversity or instead dilute it. The University must continue to use this data to scrutinize the fairness of its admissions program; to assess whether changing demographics have undermined the need for a race-conscious policy; and to identify the effects, both positive and negative, of the affirmative-action measures it deems necessary

In the past 30 or so years, Asian students have been sacrificed by elite universities at this altar of diversity, and the US Supreme Court has sanctioned this racial discrimination. Shameful.

Asian American students sued Harvard for discrimination and Harvard defended the case through trial arguing that its discrimination using soft factors was lawful. The trial judge, in a travesty, agreed with Harvard (emphasis added):

Plaintiff Students for Fair Admissions, Inc. (“SFFA”) alleges that Defendant President and Fellows of Harvard College (“Harvard”) discriminates against Asian American applicants in the undergraduate admissions process to Harvard College in violation of Title VI of the Civil Rights Act of 1964, 42 U.S.C. §§ 2000d et seq. (“Title VI”).1 Harvard acknowledges that its undergraduate admissions process considers race as one factor among many, but claims that its use of race is consistent with applicable law.

… For purposes of this case, at least for now, ensuring diversity at Harvard relies, in part, on race conscious admissions. Harvard’s admission program passes constitutional muster in that it satisfies the dictates of strict scrutiny. The students who are admitted to Harvard and choose to attend will live and learn surrounded by all sorts of people, with all sorts of experiences, beliefs and talents. They will have the opportunity to know and understand one another beyond race, as whole individuals with unique histories and experiences. It is this, at Harvard and elsewhere that will move us, one day, to the point where we see that race is a fact, but not the defining fact and not the fact that tells us what is important, but we are not there yet. Until we are, race conscious admissions programs that survive strict scrutiny will have an important place in society and help ensure that colleges and universities can offer a diverse atmosphere that fosters learning, improves scholarship, and encourages mutual respect and understanding.

The case now is on appeal. The U.S. Department of Justice has recently filed an Amicus Brief to put its position before the appeals court even though it is not a party. DOJ sided with the Asian students. The entire Brief is worth a read.

The Introduction lays out the case in summary as to why Harvard’s racial manipulation is unlawful, and the District Court was in error in excusing Harvard’s discrimination:

As Harvard undisputedly considers applicants’ race when selecting its incoming freshman class, it bore the burden at trial of proving that its consideration of race in the admissions process is narrowly tailored to a cognizable compelling interest. Yet the unvarnished record shows that Harvard’s use of race is hardly tailored at all.

The trial record established that Harvard actively engages in racial balancing that Supreme Court precedent flatly forbids. Indeed, the racial composition of Harvard’s admitted class is strikingly stable from year to year. That result is no accident. The school considers applicants’ race at virtually every step, from rating applicants to winnowing the field of applicants when attempting to avoid an oversubscribed class. And its inclusion of race in the analysis frequently makes a dispositive difference. The district court found that Harvard’s use of race was “determinative” for “approximately 45% of all admitted African American and Hispanic applicants.” ADD84. Moreover, Harvard meticulously tracks and shapes the racial makeup of its emerging incoming class throughout the process, continuously comparing the new class’s racial composition with that of the previous year. This overt engineering of racial stasis bears no resemblance to the flexible, nonmechanical “plus” factor that the Supreme Court’s cases to date have permitted.

The evidence also showed that Harvard’s process has repeatedly penalized one particular racial group: Asian Americans. Indeed, Harvard concedes that eliminating consideration of race would increase Asian-American admissions while decreasing those of Harvard’s favored racial groups. The resulting racial penalty stems in part from one component of Harvard’s admissions rubric—a nebulous and entirely subjective “personal rating”—that consistently and inexplicably produces poorer scores for Asian Americans than for other applicants. That disparity is undisputed, and unexplained. Harvard bore, but did not carry, the burden of proving that this disparity is not the product of racial discrimination. As the district court observed, based on the trial record, one could not rule out racial discrimination as the source.

Despite highlighting various holes in Harvard’s evidence, the district court credited the school’s assurances that it does not employ racial biases in the personal rating, and gave the school the benefit of the doubt when the experts’ analyses conflicted. But strict scrutiny demanded much more. Faced with the results of Harvard’s process—a barely fluctuating racial composition and less favorable evaluations of Asian Americans—and the mechanisms that produced them, the court should have put Harvard to its proof. And even if the parties’ evidence were in equipoise, a tie should have gone to the plaintiff, not to Harvard. On this record, the court should have found that Harvard’s failure to demonstrate affirmatively that its admissions process meets the Supreme Court’s stringent criteria was fatal.

The wisdom of race-based admissions policies like Harvard’s is subject to vigorous debate. But Title VI and Supreme Court precedent impose limitations on Harvard’s ability to consider race in its admissions process—limitations that Harvard has not respected. It now falls to this Court to enforce these limitations and reverse the district court’s judgment.

Harvard Hates America, wrote John LeBoutillier in 1978. He was talking about the elitest attitude that looked down on the rest of the country. Perhaps a more modern configuration would be “Harvard Hates Asian America.”

Harvard thinks it’s doing a big favor to the racial minorities that receive preference in its admissions process. But it’s not, because of the mismatch that occurs and prevents minority students from achieving their desired careers.

I was a pre-med adviser at Harvard, and it was heartbreaking to see what happened to my minority pre-med students. Harvard cherry-picks the best and brightest minority students from all over the country. Nearly all of these minority students could excel in their pre-med courses in a typical state university. But many of them could not compete with the rabid, heavily over-prepared Harvard pre-meds, and they did not complete the difficult premed curriculum. Many of them switched to Afro or other less-challenging majors, and they never had a chance to apply to medical school.

The administrators at Harvard thought they were helping these minority students by giving them a racial preference. But instead, they were dashing their hopes of becoming doctors by throwing them into the mix with Harvard’s hyper-competitive pre-meds. Most of these promising minority students would now be doctors if they had gone to a good public university where they could excel.

This disheartens me, as I see so many foreign doctors here, and they could have been American.

But most of those foreign doctors if they went to medical school in the U.S. weren’t trying to live the “Harvard” fantasy…….

I blame no teenager for seeking admission to Harvard. It’s Harvard’s role to understand it’s place in the educational hierarchy and determine admissions accordingly.

I applied to U. of Chicago. They rejected me. I assume they had some reasons. I still did what I wanted to do.

Marketing is too much with us……

I’m not blaming the students.

However a “real” educational system would instill an attitude of “critical skepticism” as well as a good degree of self-assessment and self-knowing.

Methinks the “public” educational system has been deliberately destroying those two skills – in part because it benefits them financially.

Thank you for your insight.

It’s almost a literal shark pool where they will eat you up.

Somebody should tell them. They should choose another school even if it’s less prestigious. They should transfer out to State U. when they see they can’t cut premed at Harvard.

It was their choice not to become doctors; they showed a greater commitment to Harvard than to medicine. And Harvard needs to keep a supply of students to support certain departments certainly including Afro.

3
notamemberofanyorganizedpolicital in reply to artichoke. | February 27, 2020 at 11:38 pm

And they should be called upon to consider the practical “marketing” aspects of school selection.

“Let us sit down and count the cost.”

For returning adult students and many just high school graduates, a state name university probably makes more sense if they plan to seek a job out of state. However, very often smaller, private colleges offer much better educational experiences, although the school name will usually draw a blank from employers out of state.

Or as they say:
“Only job performance counts after your first job out of school.”

Think where missing the biggest point of this story –
Government Interference!!!!!!!!!!!

The judge’s ruling in the Harvard case, not just the substantive result but the way she said it and went on and on about her leftist biases, was a sort of victory lap that needs to be reversed.

“The use of these … factors has been boosted by U.S. Supreme Court decisions upholding discrimination in the service of diversity. The argument is that diversity adds to the educational experience, so some discrimination to achieve that supposed educational end is permitted, as long as it’s not too blatant.”

A clearly unconstitutional and immoral ruling, which violates natural law. Empiricism tells us diversity is not a strength, e.g.:
New Peer Reviewed Academic Study Finds Diversity is Not a Strength — It erodes social trust
https://summit.news/2019/10/07/new-peer-reviewed-academic-study-finds-diversity-is-not-a-strength/d