Whether the 450-mile goal is reached by year end remains to be seen, but now that funding has been cleared, there likely is to be substantial progress by Election Day, allowing Trump to claim another promise kept. 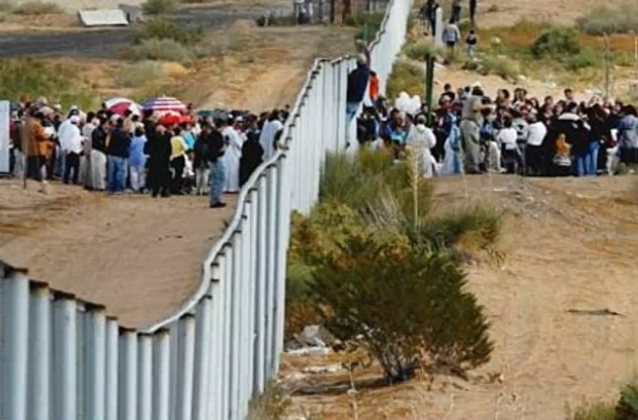 “If true” this would be a big accomplishment and promise kept.

Despite Democrats throwing everything they have at preventing funding of a border wall, Trump has used various budget maneuvers to transfer already authorized funds from other governmental agencies to building a border wall.

Trump declared an national emergency declaration to fund the wall. Democrat went to court to stop it through lawsuits, but that has not worked as even the 9th Circuit put lower court injunctions on hold.

Politico now reports that After delays, Trump on track to build more than 450 miles of border wall:

After years of setbacks, President Donald Trump is on track to build more than 450 miles of a wall along the southern border within the year, the White House says, making good on a campaign pledge as he seeks reelection.

“The project will substantially be done by the end of the year or early next year,” Jared Kushner, the president’s son-in-law and senior adviser, said in an interview Friday with POLITICO. “That was a promise, and it’s important that it’s now being accomplished.”

Since invoking an emergency declaration, the Trump administration has diverted enough money in 2019 and 2020 to build the wall in four locations along the Mexican border where most immigrants from Latin America cross into the United States, a White House official said.

The White House will soon publicly announce how many miles it expects to be able to build before Trump‘s term ends.

A new attempt by President Donald Trump to pay for a border wall is causing controversy and some harsh accusations that he’s “stealing.” …

It stems from word that the pentagon plans to shift $3.8 billion toward the border wall construction. The concept’s not new. In the past, the administration has used funds that were set for military construction and counter drug operations to instead, work on the wall. This time though, it’s money designated for military vehicles, aircraft, ships and the national guard, according to numerous media reports.

Defense Secretary Mark Esper, addressed the controversy Friday by briefly saying, “I’ll say this much: border security is national security and national security is our mission.” He added, “the action we took is legal, under the law. I think it should be no surprise and I’ll just leave it at that for now.” …

House Majority Leader Rep. Steny Hoyer, D-Md., accused the president of outright “stealing funds” and in a press release Friday, seemed confident the courts will side in Congress’s favor.

How much of the wall will be completely new, and how much will be more substantial replacements for existing structures is unclear. Replacing flimsy vehicle barriers and fences is almost as good as substantial walls is meaningful. WaPo reports as of early February 2020:

The Washington Post has obtained detailed U.S. government data about Trump’s border-wall project, its construction progress and contracts for each segment of the structure. The data shows the Trump administration is far from delivering on the president’s promise to finish more than 500 miles of new barriers by early next year….

The Trump administration is installing a structure far more formidable than anything previously in place along the border. The new structure has steel bollards, anchored in concrete, that reach 18 to 30 feet in height and will have lighting, cameras, sensors and improved roads to allow U.S. agents to respond quickly along an expanded “enforcement zone.”….

Nearly all of the new fencing the Trump administration has built so far is considered “replacement” fencing, swapping out smaller, older vehicle barriers for a more elaborate — and costly — “border wall system.”

The administration has been slower to build new barriers where none currently exist, primarily because those spans require the acquisition of private land….

Whether the 450-mile goal is reached by year end remains to be seen, but now that funding has been cleared, there likely is to be substantial progress by Election Day, allowing Trump to claim another promise kept.

Coolway, it DOES matter if it’s called an “invasion” or “wave.”

The Constitution SPECIFICALLY STATES the federal government’s OBLIGATION to protect the states from invasion.

Fair point. Then if we are going to be making a constitutional argument, we need to understand what the founders meant when they referred to invasion. I would argue they they understood an invasion to be constituted of a military incursion by the armed forces of another nation. Prove me wrong.

Let’s just go to the dictionary.

“the incoming or spread of something usually hurtful”

Your so stupid it hurts.

Barry: “Your so stupid it hurts.”
Barry’s grammar teacher: “You’re.”
Really, this is grade school stuff.

Now, as far as constitutional originalism goes, that’s a little more advanced, so I would not expect you to really comprehend the phrase ‘understand what the founders meant’.

Honestly, I’m perplexed by people who don’t think it’s a problem we have schools with kids speaking 140 different languages.

Seriously, HOW ON EARTH DO YOU DEAL WITH THAT?

Soooo….. National defense isn’t for national defense, it’s so we can mark on paper how many tanks we have. Frankly, if my country turns into another s***hole country, I don’t care if we have every tank on the planet AND control of space, it’s done my country no good.

Aggravating that Congress refuses to fund sufficient ERO (Enforcement and Removal) of ICE, so mass deportations can be done.

Save the kids from damn schools having literally dozens of languages spoken in them.

“We are hearing a lot of conversation right now, some of it extreme, about how residents from originally outside our country should be treated,” Green wrote. “We have 102,000 students here. They come from more than 180 countries, and they speak 140 languages.”