The Senate acquitted him on two charges. 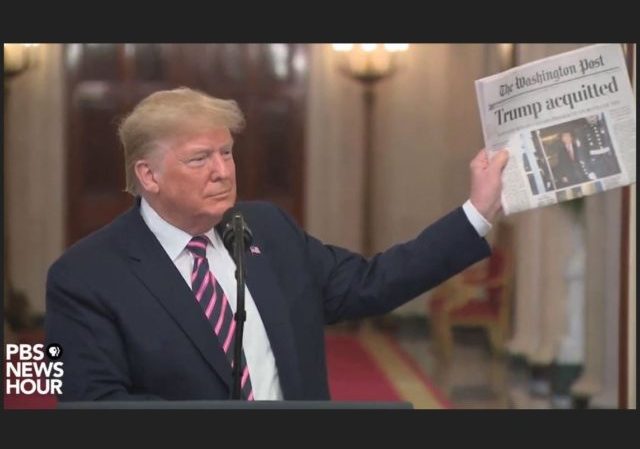 The Senate acquitted Trump on two charges: abuse of power and obstruction of Congress.

The Senate voted on party lines on the second charge, 53-47.

Trump simply held up The Washington Post with the headling “Trump Acquitted.”

Trump reminded the world that the Democrats have openly targeted him before his 2017 inauguration.

Greeted by thunderous applause and a standing ovation by his supporters, the president declared “we went through hell” but described the moment as a “celebration” — while maintaining as he did throughout the impeachment inquiry and trial that he “did nothing wrong.”

And on a day when he and House Speaker Nancy Pelosi were trading shots in deeply personal terms, Trump turned fire on those who prosecuted the case and other investigations against him. He called Pelosi and House Intelligence Committee Chairman Adam Schiff “horrible” and “vicious” people.

“It was evil. It was corrupt. It was dirty cops. It was leakers and liars. This should never, ever happen to another president, ever,” Trump said. “It was a disgrace.”

He detailed the timeline of investigations, remarking of the Russia probe: “It was all bulls—.”

As he did earlier Thursday at a prayer breakfast, Trump brandished a copy of Thursday’s Washington Post with a blaring headline: “Trump acquitted.”

Trump joked that he may frame The Washington Post paper with the headline because it’s the “only good headline” the paper has ever given him.

Would it shock anyone if he did frame it? I bet he does. I think he should!

I don’t understand the folks calling Mittens inconsistent for his vote. He’s advancing his party’s agenda again, just like in 2008.

The pens, PDJT! Where are the pens?!

Just learned something this morning.Why had I never heard of this before? The “Ben Franklin Effect”!

“Can you do me a favor?” was Franklin’s favorite conversation starter. It’s non-threatening, psychologically makes people invest in your friendship and tells people you are self-confident. When Trump uses it he gets impeached for corruption?

Trump should find opportunities to use this. For example: “Could everyone do me a favor? Could we now drop the impeachment nonsense?”