Panicked Democrats Fear Bernie Could Cost Them the House

Panicked Democrats Fear Bernie Could Cost Them the House 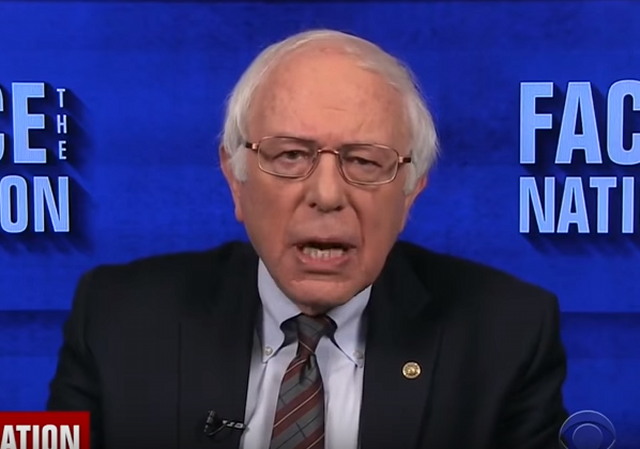 Many Democrats are rightly concerned that if Bernie Sanders gets their party’s nomination, they could lose to President Trump. The worry doesn’t end there, however.

There is a growing fear that a Bernie candidacy could also cost them the House of Representatives.

Conservatives would argue that this could and should happen anyway, but uneasy Democrats increasingly see Bernie as a bet they don’t want to take.

Moderate Democrats Fear Bernie Sanders Could Cost Them the House

As Bernie Sanders emerges as the leader in the race for the Democratic presidential nomination, his rise is generating fears among centrist Democrats that the apparent leftward shift of their party could cost them not only a chance to retake the White House, but also their hold on the majority in the House of Representatives and their shot at winning the Senate.

The anxiety is particularly acute on Capitol Hill among a small but politically important group of freshman Democrats who helped their party win control of the House in 2018 by flipping Republican seats in districts that President Trump won in 2016. Now, they fear that having a self-declared democratic socialist at the top of the ticket could doom their re-election chances in November.

Members of the group of about three dozen — often called “front-liners” or “majority-makers”— have toiled to carve out political identities distinct from their party’s progressive base, and most are already facing competitive re-election challenges from Republicans who bill them as radicals who have empowered a far-left agenda in Congress.

These people are in an impossible situation. They’re scared of a Bernie nomination, but they can’t say so just in case he actually gets it. They are also obviously terrified of retribution from far-left voters.

Some are reluctant to publicly articulate their fears of a Sanders nomination, not wanting to call attention to the divisions within their party or risk alienating a potential nominee, but several of them privately described a sense of foreboding that has set in over the past two weeks as Sanders has emerged as the top finisher in the first two contests of the Democratic race.

“There is a growing concern among especially those of us on the front lines that we will not only lose the White House but the House of Representatives,” one of them said in an interview, insisting on anonymity to avoid criticizing a potential nominee.

This concern was on full display on CNN after Bernie was declared the winner in New Hampshire. Just as Van Jones began extolling the energy behind the Sanders campaign, former Obama adviser David Axelrod stepped on the brakes almost immediately. Watch:

Matt Schlapp of the American Conservative Union thinks House Democrats have a bigger problem than Bernie, suggesting the entire field of 2020 Democrats is too far left for the general public.

Matt Schlapp on House Dems getting nervous about Bernie: The field has no moderates

While Democratic House congressmen are favoring a moderate presidential nominee over socialist Sen. Bernie Sanders, American Conservative Union chairman Matt Schlapp pushed back on that notion, arguing that there are “no moderates” in the current field.

“I think this is a mistake. The idea that [former South Bend, Ind., Mayor] Pete Buttigieg is a moderate and [former Vice President] Joe Biden is a moderate,” he told “Outnumbered,” noting that his organization “tracks all the votes” of Democratic members of Congress.

“They’re all liberals. The question is, are they socialist? I think that’s a legitimate conversation. There are no moderates in this race,” Schlapp asserted.

Democrats should be concerned. Bernie Sanders is not merely calling for a change in policy. He wants to remake the United States. He is openly calling for revolution. Calling him extreme is being polite.

The Dems are only NOW figuring this out??

The Democrats will blame losing the House on anything, except what the real reason is, Impeachment. It’s not just because they’ve lowered the standard for impeachment so much, it’s that they stretched the truth so far to get there. Adam Schiff has proven himself to be a liar. What group of voters wants to be represented by a liar? Pelosi has shown she lacks the judgement to be Speaker of the House and her district is a mess, if the Republicans put up anything close to a real candidate, she could lose also. I know this sounds optimistic, and it probably is, but those are 2 people in the leadership. Do you think the 31 in Trump districts are any safer than Pelosi and Schiff?

If Trump continues to publicly belittle and insult Bloomberg, who has, arguably, an outstanding track record as a private and public executive, this election might see $5B of his money thrown at House and Senate races and Trump winning a pyrrhic victory. Bloomberg would hardly notice the expenditure, but the country would sure notice the complete stalemate in DC, especially on judges (including SCOTUS).