“India will accord a memorable welcome to our esteemed guests,” says Prime Minister Modi. 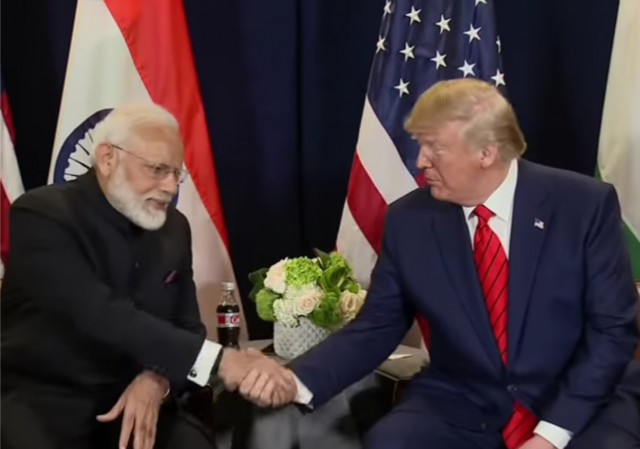 India is gearing up to welcome President Donald Trump on his first official visit to the country. The U.S. President and First Lady Melania Trump will arrive on February 24 on a two day tour of the country. “India will accord a memorable welcome to our esteemed guests,” Indian Prime Minister Modi vowed ahead of the visit.

A major event has been planned in the western Indian city of Ahmadabad, Prime Minister Modi’s home turf. President Trump will be accompanied by the Indian leader on a 14-mile roadshow from the Ahmadabad airport to a Cricket stadium. The venue selected for the rally, Motera stadium, has a seating capacity of over 100,000. Thousands more are expected to greet President Trump along the route.

Extremely delighted that @POTUS @realDonaldTrump and @FLOTUS will visit India on 24th and 25th February. India will accord a memorable welcome to our esteemed guests.

This visit is a very special one and it will go a long way in further cementing India-USA friendship.

The Ahmadabad event will be a sequel to the “Howdy Modi!” rally in Houston, Texas. About 50,000 Indian-Americans attended the event, where Prime Minister Modi invoked ‘Make America Great Again’ slogan ahead of the election year and thereby angering the leading Democrats and the mainstream media.

Trade and Defense High on Agenda

Trade and defense cooperation will dominate the U.S. presidential visit. New Delhi is expected to finalize a $2.6 billion naval helicopter deal ahead of the trip, Indian newspaper Financial Express reported.

The already strong defense cooperation has received a big boost under President Trump’s watch. In 2019, India’s military procurement from the U.S. reached about $18 billion, a Pentagon estimate suggests.

A trade deal (with limited scope) might also be on the cards, a senior State Department official indicated on Friday. The U.S. is open to signing a trade deal during the visit, if right terms were offered, President Trump indicated. “If we can make the right deal, we will do it,” he told to reporters at the White House ahead of the trip. For a comprehensive deal to happen, India needs to lower the existing trade deficit and offer a level playing field to U.S. companies, Washington maintains.

India is the United States’ eighth-largest trading partner in goods and services. Despite growing bilateral trade, the U.S. has objected to India’s protectionist policies and huge trade deficit. In 2018, the Trump administration imposed additional tariffs on steel and aluminum imports from several countries, including India.

Indian direct investment to the U.S. have grown under President Trump, currently pegged at around 10 billion, with Indian companies creating over a hundred thousand jobs in America.

The U.S. is India’s second-largest trade partner after China. In 2018, the bilateral trade reached $143 billion, an all time high. During the same year, the U.S. trade deficit slipped to $21.3 billion, compared to $24.3 billion when President Trump took office.

Political stability given by Prime Minister Modi’s landslide election victories in 2014 and 2019 has contributed to India’s economic growth. During Modi’s tenure India added a trillion dollars to its economic worth, making it a $3 trillion economy.

Given this impressive growth, the U.S. has taken India off the list of developing countries. The move will mean drastic cuts in U.S. economic aid and export subsidies. The U.S. has also removed New Delhi from a program that granted duty-free entry of up to $5.6 billion on annual exports.

“All the subsidies and benefits which India was getting would not be there now,” an Indian opposition leader lamented. “With India on the list of developing countries, there used to be subsidiaries and tax benefits, now there will be nothing.”

The U.S. president is expected to meet Indian business leaders during his stay, the news agency Reuters reports:

U.S. President Donald Trump will meet executives of large Indian companies with interests in the United States as he looks to drum up investments during his visit to New Delhi this month.

Executives of some of the companies expected to attend the meeting include Indian oil & gas company Reliance Industries, diversified group Tata Sons and auto sector companies such as Bharat Forge, Mahindra and Mahindra and Motherson, industry and business sources told Reuters. (…)

On Feb. 25, a meeting is being planned between Trump and Indian executives, especially those focusing on job creation and manufacturing in the United States, the sources said. (…)

Creating new jobs and boosting manufacturing is critical for Trump in his re-election bid later this year. U.S. factory activity rebounded in January but only after it contracted for five straight months.

“President (Trump) is keen on acknowledging Indian companies which are focusing on manufacturing in the United States,” said a Washington-based source aware of the plans.

United States is a key market for several Indian firms. Mahindra last year said it will invest another $1 billion in the United States and was committed to creating American jobs, while Bharat Forge has announced plans to invest $56 million to set up a new plant in North Carolina. The $100-billion Tata Group says it is one of the largest Indian-headquartered multinationals in North America, with 13 companies and more than 35,000 employees.

Jihadi terror warning ahead of the visit

New Delhi-based TV network CNN-News 18 reported the terror threat ahead of the visit:

Terror outfit Jaish-e-Mohammad (JeM) has released a video calling for “revenge” ahead of US President Donald Trump’s much-anticipated India visit.

The video threatens the Indian government and says “the killers would not be forgiven”. “The way you harassed the Muslims and destroyed their settlements will be avenged… We have heard a lot of lullabies on peace… now every excuse has gone… it’s time to see things ‘unrestrained’,” the person on the video says.

Sources say the video and its contents are Pakistan’s attempt to show during Trump’s tour that “Kashmiris are angry after the removal of Section 370 and they are carrying out terrorist attacks”.

New Delhi’s desire to boost relations with Washington are firmly rooted in realpolitik. India, flanked on both by hostile neighbors—to the east by Communist China and to the west by the Islamic Republic of Pakistan—, needs U.S. support in dealing with the geopolitical challenge. In recent years, India has faced border steifes and skirmishes from both of these neighboring powers.

A China-Pakistan alliance has rattled New Delhi. Beijing has acquired a naval base in Pakistan, exposing India’s commercial capital Mumbai and the country’s strategic oil reserves to a direct Chinese strike. India is equally worried by China’s Belt and Road Initiative, a multi-billion dollar project to buy off highways and ports all across Eurasia. China’s growing commercial clout across the globe is accompanied by its growing military reach.

Given these geopolitical threats, the U.S. has emerged as India’s partner of choice. With President Trump sharing India’s concerns over Chinese expansionism and Islamic terrorism, New Delhi has a friend in Washington.

‘PM Modi is a friend of mine, a great gentleman,” says President Trump ahead of the visit

The world is bowing to PDJT.

Compare with soro’s organ-grinder monkey bowing to the world:

Have to say that Modi rolling out the red carpet for the Trumps is also a backhanded slap at Justin Trudeau. Several years ago he took his family to India on a thinly-disguised official trip that really was a taxpayer-funded vacation. Some mid-level official greeted them at the airport and Canadian officials had difficulty finding anyone willing to have a meeting with him to make it look like it wasn’t a vacation. The whole visit turned into a scandal-plagued international embarrassment.