The Washington Post reported that Trump’s acquittal and improving approval ratings “have generated convulsions of angst among Democrats.” 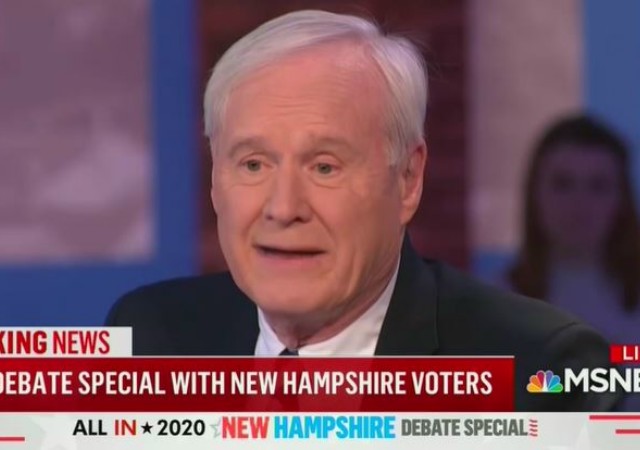 The Democratic party’s crackup has become very public and very intense in recent weeks, especially in the aftermath of the ongoing Iowa caucus debacle, President Trump’s State of the Union address Tuesday and his Wednesday acquittal.

Their two biggest issues? Trump’s political resiliency and whether or not a far left candidate like admitted socialist Bernie Sanders would lead to another four years of him.

Just this week, former Clinton adviser James Carville had a meltdown over the “AOC crazy” direction he says the Democratic party has taken, and former Obama adviser Van Jones hit the panic button for Democrats over Trump’s serious play for black voters.

Not to be outdone, after Friday night’s Democratic presidential candidate debate in New Hampshire, MSNBC’s Chris Matthews went on a tear against Sanders, bluntly stating that socialism “doesn’t frickin’ work” and wondering what Sanders thought about socialist dictators like Fidel Castro:

“[T]hose of us like me who grew up — who grew up in the Cold War and saw some aspects of it after visiting places like Vietnam like I have, seeing countries like Cuba, being there, I’ve seen what socialism is like. I don’t like it. Okay? It’s not only not free. It doesn’t freaking work. It just doesn’t work.”

“When they go back to the early 1950s, I have attitude about them. I remember the Cold War. I have an attitude towards Castro. I believe if Castro and the — and the Reds had won the Cold War, there would have been executions in Central Park and I might have one of the ones getting executed and certain other people would be there cheering, okay? So, I have a problem with people who took the other side. I don’t know who Bernie supports over these years. I don’t know what he means by socialism.”

The especially interesting thing about Matthews’ rant was that every time the camera panned to one of the other MSNBC talk show hosts on the panel, they looked visibly uncomfortable and eager to move on, as if they were offended that Matthews was busting loose with some inconvenient truths about their beloved socialism.

Matthews even insinuated that if Sanders won the nomination he and others who agreed with him would either sit out the election or leave the Democratic party.

Video: Watch Chris Matthews GO OFF like a boss (no, I'm not joking) about the dangers of socialism re; Bernie, the pure evil of communism, the legitimate fears of a Red Scare in the Cold War, and how "there would have been executions in Central Park" if they won pic.twitter.com/2XxmZbsJTc

Prominent Bernie Sanders supporters on social media like Shaun King erupted after Matthews’ rant, with King absurdly suggesting Matthews was “sliding into anti-Semitism” with his criticisms of Bernie:

Perfect that #FireChrisMatthews is trending. @HardballChris has exposed himself as a 21st century version of Joe McCarthy. As the great Army lawyer told the vile senator in 1954, to much applause, "have you no sense of shame, sir, at long last?" That was the end of his career.

But while Bernie’s Twitter mobs were waging war on Matthews, Democrats on Capitol Hill were admitting to serious concerns over how Trump has successfully weathered the political storms he’s faced to date, and if a bruising primary battle among Democrats would give him more advantage in the fall election:

“I think Iowa made nobody happy — everybody is ready to move on. New Hampshire is next week and we are moving forward,” said Rep. Debbie Dingell, a Michigan Democrat. She added: “He can win again … I’ve been saying it for a while.”

“We shouldn’t underestimate him,” said Rep. Ro Khanna, a California Democrat and Bernie Sanders supporter. “Only eight American incumbent presidents have ever lost. It’s always a challenge to defeat an American president. But he has a lot of glaring weaknesses.”

Rep. Brendan Boyle, a Pennsylvania Democrat who supports Joe Biden, said that after the party’s sweeping success in the 2018 midterms, some in the party had unrealistic assumptions about 2020.

“I did sense just talking to some supporters of mine, some diehard Democrats back home, some folks here, that there might have been a little bit of what Alan Greenspan once called ‘irrational exuberance’ about 2020,” Boyle said Friday in the Capitol. “I would always say that this is going to tighten.”

Boyle said it could be ultimately beneficial that many in his party now realize how hard it will be to defeat Trump.

The Washington Post’s report about Democratic fears regarding a Trump reelection in November was far more stark:

Anxiety is coursing through the Democratic Party as President Trump emerges from his impeachment proceedings as a potent threat for reelection, with party leaders and activists uncertain about how to beat the incumbent and worried about a nominating race that remains crowded and is growing more acrimonious.

[Trump’s acquittal and improving approval ratings] have generated convulsions of angst among Democrats, who watched their first-in-the-nation Iowa presidential caucuses conclude in a chaotic fiasco and deliver an inconclusive result. Many in the party are now sounding the alarm that denying Trump a second term could be far more difficult than they had calculated.

All that said, there’s still a long time to go between now and November, and anything could happen. But for a man who has been under a constant barrage from Democrats, Never Trumpers, and their media allies with no end in sight, to be in such a good political shape in the aftermath and right as the 2020 presidential race is kicking into high gear is pretty remarkable.

When Clinton was elected in 92 Matthews ultimately cast his lot with the Dems for career purposes, and he’s carried their water since then, but he’s NOT a leftist. In fact he’s more than moderate. Never forget that prior to 92 he was Rush Limbaugh’s hand selected go-to guest host.

True. But mathewa turned to the dark side long ago.

He’s done a lot of damage to our country.

Don’t be such a drama queen. Voices of reason and moderation speaking the truth should be encouraged in today’s Democrat Party, not disparaged.

Those people were literally squirming, they were so uncomfortable with the things Matthews was saying. And for once, Matthews was speaking the truth. WTF is wrong with these people that they can’t own up to the truth about socialism? Are they stupid? Or just afraid?

Everytime I go to Yahoo news and the most popular comment on a subject is pro Trump, I count the ups and downs on that comment….
Based on that, Democratic support nowadays should be around 25 to 30%….

Well said Chris. However in November, if Bernie’s the man, Chris will be there pulling the lever for him.