“It’s time to elect a progressive majority in Congress accountable to strong, grassroots movements that push support for issues like Medicare for All, a Green New Deal, racial justice, & more.” 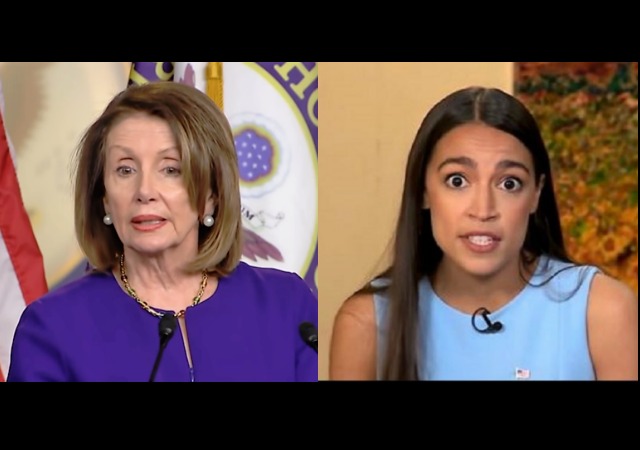 Rep. Alexandria Ocasio-Cortez (D-NY) has not endeared herself to current House Speaker Nancy Pelosi (D-CA).  In fact, she seems intent on a showdown.  From protesting climate change outside Pelosi’s office to accusing Pelosi of racism, Ocasio-Cortez (AOC) seems to go out of her way to poke at and bait Pelosi and the entire Democrat establishment.

Her latest gesture of defiance is a whopper, one that Pelosi will have to address. If she dares. AOC has launched a PAC aimed at building a “progressive” (read: socialist/communist) majority in Congress.  Its goal includes primarying moderate Democrats in both the House and the Senate.

It’s time to elect a progressive majority in Congress accountable to strong, grassroots movements that push support for issues like Medicare for All, a Green New Deal, racial justice, & more.

It’s time to elect public servants with the Courage to Change: https://t.co/K6JXmCH2Vh

Pelosi—the face of the Democrat establishment—has repeatedly shrugged off both Medicare for All and the Green New Deal lunacy, and this PAC seems a clear shot across the Speaker’s bow.

Rep. Alexandria Ocasio-Cortez, who gained an instant national profile when she toppled a top Democratic leader in 2018, has launched her own political action committee to boost challengers in 2020 congressional races.

The move shows the 30-year-old New York freshman’s intentions to continue battling with her party’s establishment.

Ocasio-Cortez unveiled the website for her group — dubbed “Courage to Change” — along with a slate of seven endorsements for female candidates who in some cases are competing against other Democrats backed by party campaign committees.

Although her latest project showcases her willingness to clash with her own leadership, Ocasio-Cortez’ name recognition and regular turns on national media outlets could help attract more money from people new to politics at a time when the 2020 presidential contest is the major focus for many regular party donors.

Her new group’s mission statement says it “seeks to reward challengers and incumbents who display political courage — people who refuse to bow to establishment pressure, who advocate ferociously for working-class families, and who have lived the same struggles as the people they seek to represent.”

The PAC seeks to “reward” those with the “political courage” to “refuse to bow to establishment pressure”?  Sounds like the ball is now firmly in Pelosi’s court. What will she do?

The DCCC is still unhappy that AOC has refused to pay her dues and has declined, according to NPR, to comment on her new PAC.

The Democratic Congressional Campaign Committee declined to comment on the new PAC. House Democrats are encouraged to pay dues to help support their colleagues to the House Democrats’ campaign arm, but Ocasio-Cortez has not paid hers this election cycle.

The DCCC has boasted about its record-breaking fundraising this cycle — bringing in $125 million in 2019, a more than $20 million increase than it raised in 2017.

It’s unclear how much money the new progressive PAC will dole out — Rolling Stone reports so far it has raised $340,000 in the last month.

AOC is not shy about her contempt for establishment Democrats. In her announcement, she highlighted a DCCC decision intended to deter primary challenges by refusing to hire political vendors who work for Democrats challenging sitting Democrats.

The first batch of endorsements are seven women who are running for House seats and one Senate seat, as first reported by The New York Times.

Samelys Lopez, a Bronx native and housing advocate who grew up in a homeless shelter, is among the initial candidates backed by AOC’s group. She’s running in a jam-packed field of over a dozen contenders for the Bronx’s 15th Congressional District, currently held by retiring longtime  Rep. Jose Serrano (D-Bronx).

“As a rebuff to the Democratic Congressional Campaign Committee who last year blacklisted organizations that provide support for insurgent campaigns, Courage to Change PAC has chosen Samelys Lopez, a Dominican and Puerto Rican housing justice advocate, to represent the South Bronx,” the political neophyte said in a press release.

It seems the Justice Democrats‘ plan to take over the Democratic Party is moving right along.

I’m trying to remember … when Pelosi was making deals to be Speaker at the beginning of 2019, didn’t she agree to step down .. but I can’t remember if it was in two years or in four years

Where, oh where is Hilly?

Now that we really don’t need her.

If AOC wasn’t such an idiot, I’d enjoy watching her challenge Pelosi.

Rep. Alexandria Ocasio-Cortez wants to wait outside the GOP cloakroom and ask congressmen how much their suits cost

IMO, AOC is an idiot like the Taliban was JV league. In her first term she is the most disruptive force in the dem party today; more than Bernie, whom she is using for her own ends. The dems underestimated her appeal (and Bernie’s) and are paying for it. We know she is wrong on every issue, but the college grads of the last 10 years have been educated on her brand of stupid and are out in force. We underestimate her at our peril.

Consider this: the dems think she can be primaried out of their hair; but if Bernie wins, her support now gets her a cabinet post.

(My kingdom for an edit function.)

Perhaps she could be the new Secretary of Social Justice. (You heard it here first)

Pelosi, you fithy POS: you rode the wind, now you’re reaping the whirlwind. Unfortunately, we all have to suffer your damage and your corruption.

Hence, you being a filthy POS.

I Need to buy more popcorn.

Now there is a new Branco cartoon. Bloomberg watering a field of popcorn plants.