PM Boris Johnson: “At times it felt like we would never cross the Brexit finish line, but we’ve done it.” 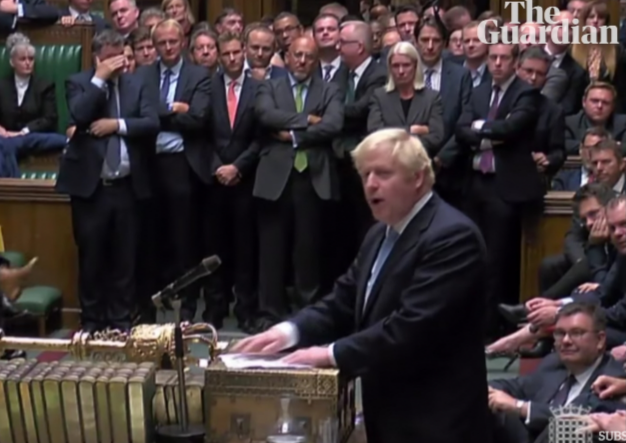 The bill was cleared 342 to 254 in the Lower House after legislators rejected all amendments suggested by the House of Lords, including guarantees for accepting minor migrants from the continent.

Wednesday’s vote paves the way for the UK to leave the EU on 31 January, awaiting formal permission from Her Majesty The Queen.

“At times it felt like we would never cross the Brexit finish line, but we’ve done it,” Prime Minister Johnson declared following the vote.

The UK newspaper Telegraph reported the passing of the bill:

Boris Johnson promised a “bright, exciting future” after history was made with the passing of his Brexit Bill by both houses of Parliament on Wednesday night.

The Withdrawal Agreement Bill will become law when it receives royal assent, confirming Britain’s exit from the EU on Jan 31.

The Prime Minister said: “At times, it felt like we would never cross the Brexit finish line, but we’ve done it.” Having cleared Parliament, the new law will have to be ratified by the European Parliament in a vote that will take place on Jan 29, thought a formality.

The Bill cleared its final Parliamentary hurdle at 6.17 pm when the House of Lords bowed to the will of the Commons, which had overturned every amendment by peers this week.

Three years after a referendum over the country’s membership in the EU, the UK will leave the 27 member bloc in a week. The country was due to leave the EU on March 29, 2019, as proposed by the then-Prime Minister Theresa May. Still, her plans were repeatedly rejected by an overwhelmingly pro-EU parliament, which included several lawmakers of her own party.

May’s failure to see through the Brexit led to her resignation in July last year. Boris Johnson replaced her as the prime minister and called a snap election in December. The Johnson-led Conservative Party won a majority of 80 seats in the Lower House, reducing the pro-EU Conservative, Liberal, and Labour lawmakers to a minority.

While the EU has agreed to Britain leaving the bloc, news reports suggest that Brussels intends to punish its leading trading partner and Europe’s second-largest economy.

“EU preparing to give UK worse trade deal terms than Canada or Japan,” The Telegraph reported on Monday.

Brussels is planning to hit Britain where it hurts the most. The European Commission, the EU’s executive arm, has drawn up a hit list to target the British financial sector for defying the EU to dictate regulations following the Brexit.

“Commission officials told European Union diplomats they had identified 40 different types of financial services that could be frozen out of the EU’s market at a meeting in Brussels earlier this week,” The Telegraph disclosed in a separate report.

The EU’s wrath has been intensified by the British government’s refusal to align itself to the EU laws after January 31. The EU Withdrawal Bill “paves the way for a new agreement on our future relationship with our European neighbors based on an ambitious free trade agreement … with no alignment on EU rules, but instead control of our own laws.” Johnson said last month after resoundingly winning the general election fought on those lines.

They wanna leave? OK, punish them any way we can. Well, now we know what that standing EU army would be for.

BTW, if they’re kept in by occupation, it’s called an empire (not a union). Our European friends have some experience with such things, so you’d think they’d get what this is.

1
notamemberofanyorganizedpolicital in reply to BierceAmbrose. | January 23, 2020 at 3:19 pm

Wasn’t it last year the Germans had military practice but had to use wooden sticks for guns – because they had almost no real guns….

Standing EU army: for when occpuation by bureaucrats isn’t cutting it any more.

Are the Brits paying the many billions in fees to Brussels that were in May’s deal??

The EU has stolen enough from the UK.

Yes. I’m not sure exactly how large the fee is, and whether it’s any smaller than the one May agreed to. But it’s definitely large, and the UK will be paying it.

Has the NCAA approved the deal yet? I know that movement within that world is slightly more complex, and expensive than Brexit. I wonder how long until someone in the UK goes “oh, that is what the colonies were talking about in 1776. Now we get it.”

guarantees for accepting minor migrants from the continent

It’s almost like the House of Lords can’t be bothered to hide their plans for demographic replacement of the British People.