State Sen. admits the law “didn’t have a lot of time for development, either on the policy side or the funding side.” 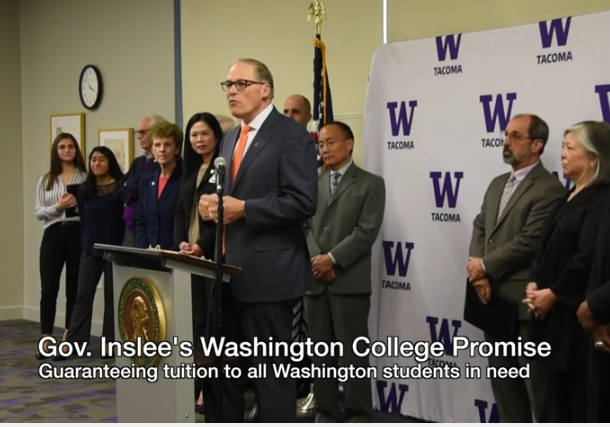 Washington lawmakers made national headlines when they promised to use a new business tax to make tuition at public colleges significantly more affordable — or free — for students across the state, starting in the 2020-2021 school year.

But now, after 31,000 students have submitted financial-aid forms, lawmakers and government officials are questioning whether the tax raises enough money to keep their promise.

. . . . State Sen. Jamie Pedersen, D-Seattle, said last year’s law “didn’t have a lot of time for development, either on the policy side or the funding side.”

The premise of last year’s college-affordability legislation, which came as Gov. Jay Inslee campaigned for president, was to guarantee financial aid for anyone who qualified.

. . . . Officials planned to pay for the grants through a surcharge on roughly 82,000 businesses that rely on college-educated workers, such as Microsoft and Amazon, and also consulting firms, engineering companies and other businesses.

The law included a description of the types of businesses subject to the surcharge, but according to the agency tasked with collecting the tax, the language is so complex that it anticipates trouble with getting companies to pay. So far, some smaller businesses, such as doctor’s offices, have requested an exemption.

“We have concerns that we will be able to collect this,” said Mikhail Carpenter, a spokesperson for the Department of Revenue.

In response to concerns about a potential shortfall, Inslee has requested $28 million from the general fund to offset the expected budget shortfall, an acknowledgment that the state may not raise enough in 2020 tax revenues to cover the college grant’s cost. An estimate from the state Office of Financial Management projects this shortfall will swell to nearly $50 million a year by fiscal year 2023, as more high school graduates start college.

Watch the announcement of this free/heavily-subsidized college “promise”:

Well, they could let Liberty (east of the Cascades) split off and maybe could afford their socialism for a while more.

Seems if Inslee raises taxes, fewer will be able to afford and more will need money. And if he funds them, more still will need money. Eventually, the system will equilabrate but wouldn’t jobs be a better solution? Oh wait…

Report: State Cannot Afford Its New “Washington College Promise” Law.
Washington lawmakers made national headlines when they promised to use a new business tax to make tuition at public colleges significantly more affordable — or free — for students across the state, starting in the 2020-2021 school year.

The solution is obvious. Staring them in the face. Just pass a federal “College Subsidy Promise Law”, promising to use a new tax to make subsidizing public college tuition significantly more affordable — or free — for states across the nation.