After China deal is signed and North Korean Foreign Minister fired, it looks like the same pieces…just moved around the board a bit. 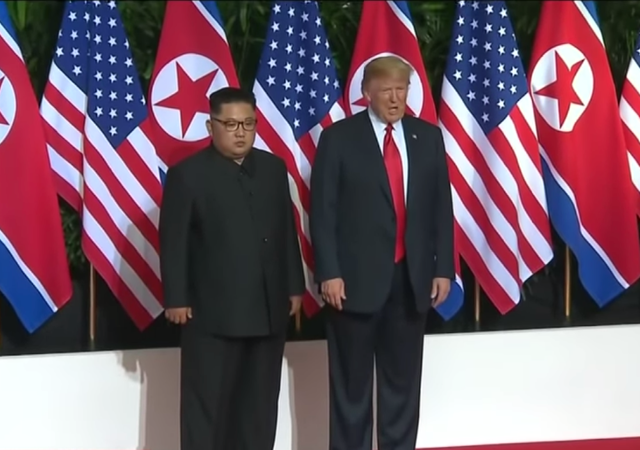 A few days ago, the U.S. signed phase one of a YUGE trade deal with China.

Now that the ink is dry, it might be good to check on China’s rogue puppet, North Korea. Perhaps there may be forward movement on peace deal negotiations that began in Singapore nearly two years ago.

This week, the U.S. ambassador to South Korea said he was “surprised” and “glad” that North Korea failed to deliver its threatened “Christmas gift.”

“You can say that I personally was surprised. But I’m glad also … there was no Christmas gift,” Ambassador Harry Harris told reporters in Seoul. “Washington was ready for any eventuality, and we were all glad that there was no ICBM test or nuclear test.”

“President Trump … is still confident that Kim Jong Un will meet the commitment that they both made together in Singapore,” Harris said. “We should focus on President Trump’s view that there is room for discussion here.”

Meanwhile, Trump said that he views the on-again, off-again nuclear talks with North Korea as a “beautiful game of chess.”

Trump made the remark during a White House signing ceremony for a phase-one trade deal between the United States and China, giving Beijing credit for “helping us with North Korea.”

“China is helping us with a lot of the things that they can be helping us with, which you don’t see in a deal, but they have been very, very helpful with respect to Kim Jong-un, who has great respect for President Xi,” Trump said, referring respectively to North Korea’s leader and Chinese President Xi Jinping.

He continued: “It’s all a very, very beautiful game of chess, or game of poker, or ― I can’t use the word checkers because it’s far greater than any checker game that I’ve ever seen, but it’s a very beautiful mosaic.”

Recently, the Trump administration reached out to North Korea in hopes of resuming denuclearization talks, a report said.

National security adviser Robert O’Brien told Axios that the administration “reached out to the North Koreans and let them know that we would like to continue the negotiations in Stockholm that were last undertaken in early October.”

“We’ve been letting them know, through various channels, that we would like to get those [negotiations] back on track and to implement Chairman Kim’s commitment to denuclearization,” O’Brien told the outlet.

How has North Korea responded? It has just replaced its Foreign Minister.

The usually well-informed outlet, citing multiple unnamed sources in Pyongyang, said Ri would be replaced by Ri Son Gwon, the former chairman of the Committee for the Peaceful Reunification of the Country (CPRC), who played a prominent role in inter-Korean talks in early 2018.

North Korea news said the move, of which there has been no mention in official North Korean media, was part of a major political reshuffle that could have a significant impact on the country’s diplomatic stance. The outlet said it would likely be confirmed on or before Thursday, when an event for resident diplomats is scheduled in Pyongyang.

And there has also been a bit of sword rattling.

North Korea leader Kim Jong-un warned the United States to prepare for retaliation against crippling economic sanctions as he announced Pyongyang developed a new secret weapon. Former CIA North Korea analyst Soo Kim told Express.co.uk Kim’s warning is a “credible threat” not only against the United States because of the confidence shown in his menacing message.

Ms Kim said: “There’s definitely movement, the testing results definitely show that they have advanced pretty remarkably within a short span of time.

So if this is chess, it looks like the pieces are all the same . . . just moved around the board a bit.

Let’s be real, Kim does not want to be suicided and has been waiting for further direction from China. Now that the trade deal is moving, watch this relationship warm again.

If Trump dares to talk to the Norks without Congressional approval, that will be the 3rd article of impeachment. Nancy already ordered a new set of pens.

I sort of feel sorry for the recently departedNK Foreign Minister.
Did he leave via an artillery shell, napalm, or some other method?

She can shove her pens up her ass.

She’ll not likely survive 2020. She is the most pathetic house speaker, rivaling evenn boehner.

Save your “Trump 2020” paraphrenalia, to flood pelosi’s office with after PDJT wins.

Has anyone explained that we can deliver more spectacular presents than NK?

Nope. No one ever will.

PDJT did it 2-fold: (1) demonstrating to Kim he will very well be whacked if he does anyhthing stupid, and (2) via the chi comms – who have used the NKs for decades as a proxy to screw with the US.

Think about all the losers/traitors before PDJT who worked WITH Kim to facilitate his madness: obama, clinton, madeline albright, john kerry, etc.

“It’s all a very, very beautiful game of chess, or game of poker, or ― I can’t use the word checkers because it’s far greater than any checker game that I’ve ever seen, but it’s a very beautiful mosaic.”

Does anybody seriously believe that Donald Trump, of all people, doesn’t know how to negotiate?

Though I am slightly concerned that he described his mosaic as “beautiful” . . . but not “yuge.”

A beautiful game of chess except the master is playing against a child. Winning the match is frowned upon. Orange Man bad…