“the president, under his Constitutional authority as commander-in-chief, had ample domestic legal authority to take him out without additional Congressional authorization” 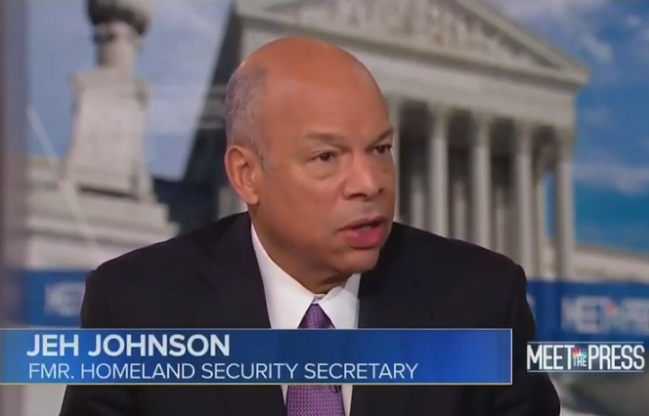 On Sunday, Obama Department of Homeland Security Secretary Jeh Johnson appeared on Meet the Press and dropped a truth bomb on the left.

Johnson said that the president not only had “ample domestic authority” to order the Soleimani strike but that he could do so “without additional Congressional authorization.”

Johnson: Soleimani was a "lawful military objective" & the President had "ample domestic legal authority to take him out" pic.twitter.com/1LUqYAwm9j

“If you believe everything our government is saying about General Soleimani, he was a lawful military objective and the president, under his Constitutional authority as commander-in-chief, had ample domestic legal authority to take him out without additional Congressional authorization,” Johnson explained. “Whether he was a terrorist or a general in a military force that was engaged in armed attacks against our people, he was a lawful military objective.”

Of course she’s willfully and purposefully ignoring Obama’s policy of allowing Iran’s QUD forces to infiltrate and subvert Iraqi military/police with officers and NCO’s loyal to the Ayatollah.

So, this line of thinking will play out during the coming week.

We need more people to cross the aisle and speak up for what’s right. I wasn’t a fan of Jeh Johnson when he was the head of the DHS, but it was probably for a no good reason – like “… he’s a Democrat.”

He’s still a Democrat but let’s give him credit where credit is due.

Don’t give him too much credit. He still has Obama’s back. He knows if Trump goes down for this, he and Obama still can too.

No contract to sell overpriced nike sneakers to financially needy black people for you, eh Jeh? Kapernick and le bron james seem to have that pathetic gig tied up.

Pelosi wanted Trump to inform her and Congress so they can tip off Iran on what Trump is about to do. F the Dems..

Of course, he had to agree with our President’s actions being acceptable without the approval of congress, for which he is accurate in stating. Obama ordered 2,800 air strikes without prior approval from congress. If he said otherwise, he would conform that Obama also erred in conducting air strikes absent prior approval.

And helped push the ‘Arab Spring’ MB sponsored uprisings, helping to destabilize the whole region.
Helped murder a leader who decided to play ball with the US (an act cited by Kim as a reason to mistrust the US) – why?
Helped destroy Libya for – why? For resisting the transfer of Stingers from his control to Syrian rebels?
And conducted extra-judical killings (murder) of US citizens abroad by drone?
And transferring weapons to the FBI’s pet protected cartel in Mexico, the one run by El Chapo? How much plato did that take?