When you treat the leader of your own country worse than you do a terrorist ringleader, you really shouldn’t be shocked when your rhetoric gets turned around on you. 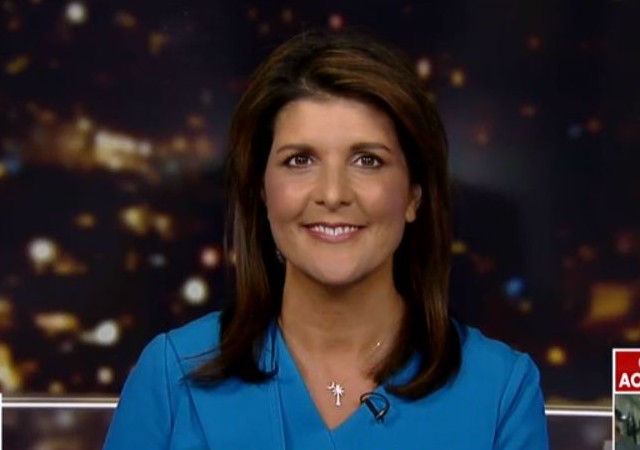 Nikki Haley did not mince words on Sean Hannity’s show on Monday night. She addressed the successful U.S. military strike against Iran’s Revolutionary Guard Gen. Qassem Soleimani, Trump’s decisive leadership on the issue, and where Democrats stood in the aftermath.

The former U.S. Ambassador to the United Nations started out by telling the Fox News host that the demise of Soleimani had left the Iranian mullahs “flat-footed” and “trying to figure out” what to do next:

But make no mistake, Sean. What the president did left the Iranian regime completely flat-footed. They did not see this coming. They thought they could continue to do their multiple strikes.

But when it got to the lives of Americans, the president is never going to allow that to happen. It happened with the contractor. When they started to threaten our diplomats at the embassy, our military personnel, the president put a stop to it.

You could see the ayatollah crying today, because that was his number one strategist. That was the number one guy that has literally told all of the proxies in all of these countries who to kill, when to kill, how to kill. And that guy is now gone.

So, Iran is having to regroup and figure out, now what?

So, make no mistake. They’re shaking in their boots. They’re trying to figure this out.

Watch this segment from the interview below:

My thoughts on what the death of Soleimani means for Iran. pic.twitter.com/uUCW3oSfdW

Later, Hannity brought up remarks from General David Petraeus, who said over the weekend that it was “impossible to overstate” how significant the Soleimani strike is. Petraeus called it “bigger than bin Laden …bigger than Baghdadi.”

Soleimani’s control over the region was so vast, said Hannity, but that control is now gone thanks to Trump’s decision to take him out. “That’s the reason why the Jordanians, Egyptians and Saudis now are working with the Israelis, which I don’t think anybody saw coming,” he noted.

Haley responded by pointing out that no countries were standing up for Iran in the aftermath of Soleimani’s death. She added that the “only ones that are mourning the loss of Soleimani are our Democrat leadership, and our Democrat presidential candidates.”

“The only ones mourning the loss of Soleimani are our Democrat leadership and Democrat Presidential candidates.” pic.twitter.com/IZJJqpxkBE

You can watch the full interview here:

Qasem Soleimani was the #1 guy who told all of Iran's proxies "who to kill, when to kill, how to kill". @UANI Senior Advisor, Ambassador @NikkiHaley spoke with @seanhannity about President Trump's decision to take out Iran's top general. https://t.co/5gW811PTYf

Naturally, Haley is being attacked by the outrage mob over her remarks about Democrats. Her name trended on Twitter for most of the morning Tuesday, with Democrats and media outlets like the Washington Post (but I repeat myself) saying “the old” Nikki Haley was gone:

The new one just said Democrats are "mourning" a terrorist. https://t.co/Ec4hvrijfq

And speaking of not rising above the noise, I wonder why @NikkiHaley is muddying waters with her inaccuracies and misspeak? https://t.co/1EXzUsr47i

You're a liar. @NikkiHaley . https://t.co/wmbmlk8EtK

I cannot wait for this Trump train to crash.

Via the USA Today:

“Shameful, dangerous comment,” tweeted 2020 Democratic presidential candidate Marianne Williamson. “We’re in trouble as a nation when an ex-Governor and UN Ambassador would say something so dishonest.”

“This is categorically false. The former Governor of South Caroline, former Ambassador to the United Nations & current member of the board of directors of Boeing Corporation – on television saying something she absolutely knows is untrue,” MSNBC host Stephanie Ruhle said.

Oh, cry me a river with these complaints. Seriously.

The reactions to the Soleimani strike from Congressional Democrats, presidential candidates, and  liberal commentators have mostly said, “Yeah, he was a bad guy bbbbbut Orange Man Bad and stuff.”

There have been ridiculous accusations that Trump’s wagging the dog, and some have even called Trump an “assassin.” This brings to mind disturbed lone individuals like John Hinckley, Jr., not the leader of the free world responding to a murderous terrorist mastermind responsible for the deaths of over 600 American military men and women, and injuries to over 1,600 more.

All Democrats had to do after news of Soleimani’s death broke was not to act crazy, to acknowledge that it was a good thing that Soleimani had been taken out and then move on. But they couldn’t do it. They had to treat Trump as though he was the bigger enemy. After three years, it’s still the only drum they know how to bang.

They shouldn’t act surprised nor outraged that Republican leaders like Haley accused them of mourning Soleimani’s demise. When you treat the leader of your own country worse than you do a terrorist ringleader, you really shouldn’t be shocked when your rhetoric gets turned around on you.

But I still don’t fully trust her.

TheFineReport.com, Can you recall what was that seems to bothered both of us about Halley?

While SC gov, she caved on removing confederate flag from state capitol grounds; she criticized POTUS before, during, and after her tenure as UN ambassador, but mostly, she. is. a. RomneyClientTM.

Interesting. Schiff and his pals accuse people and the accused laugh at them. Ambassador Haley accused the Dem’s and “progressives” of something and they attack and whine. I just guessing, mind you, but I think that says more about one side than the other.