This portion is actually interesting. Except when Adam Schiff answers questions. 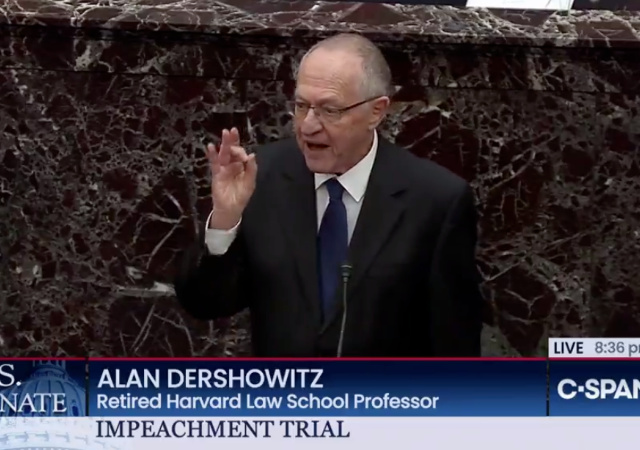 The Senate will conclude its Q&A session today. I encourage everyone to pay attention to it. I found it interesting, except when Adam Schiff speaks.

Trump lawyer Jay Sekulow is 100% correct. We have seen how they behave when it doesn’t go their way.

"Do you ever envision the House Managers agreeing there has been a fair trial if it ends in the President's acquittal?"@JaySekulow: "Mr. Chief Justice, members of the Senate, the answer is no." pic.twitter.com/6a1RyVLBdw

Rep. Jerry Nadler has a tendency to provoke Republican senators. He did it again today:

Nadler argued it didn’t matter if there was a mixed motive.

“Once you prove a corrupt act, that’s it,” he said.

Philbin had a great reminder for everyone about a person not waiving their rights:

Mr. Philbin responds thatit is “striking and shocking” that Democrats have cast President Trump as having something to hide because he has sought to block some potential evidence. He said Democrats have made statements such as “only the guilty hide evidence,” “Only the guilty don’t respond to subpoenas,” and “this is not the way innocent people act.” Mr. Philbin continued: “Well, of course, that’s contrary to the very spirit of our American justice system where people have rights, and asserting those rights cannot be interpreted as an indication of guilt.”

Well, Paul submitted his question right away and…

Senator @RandPaul sends question to the desk during Impeachment Trial.

The session has about seven hours and 54 minutes left for the House managers and President Donald Trump’s team.

The media has latched its claws into retiring Tennessee Sen. Lamar Alexander as the wild card. He’s basically told everyone to leave him alone.

Then we have conservative Democratic West Virginia Sen. Joe Manchin. He said he would vote for witnesses, but that includes a subpoena for Hunter Biden.

Sen. Lindsey Graham is confident the chamber has 53 votes to subpoena Hunter Biden.

Q: Are you aware of any other POTUS other than POTUS Obama that shut down a massive years long narco-terrorism drug ring and money laundering prosecution so that he could personally benefit by appeasing the terror state of Iran and present to the MSM a meaningless signed treaty?

Personally benefit?! Only his ego benefited.

“We’ve all had a lot of negative history with McConnell over the years but the one thing you have to give him props for is his mastery of procedure as well as his fierce protection of his domain in the Senate and his turf. No way in Hell is he going to let four fools on our side screw him over. Along with massive political winds at his back and against each of the recalcitrant RINOs, a couple of huge developments shook out over the course of the day that seem to have sealed the deal.”

Just an observation – Roberts seems to be wielding far more power than section 6 provides.
All he is allowed to do is preside, not to make rulings of any sort. Apparantly he has exercised the authority to keep the whistler blowers name secret. I doubt that he has such a power.

Artical 1 section 6: The Senate shall have the sole Power to try all Impeachments. When sitting for that Purpose, they shall be on Oath or Affirmation. When the President of the United States is tried, the Chief Justice shall preside: And no Person shall be convicted without the Concurrence of two thirds of the Members present.

Justice Roberts Blocks Rand Paul From Naming Whistleblower, Paul May Force The Issue (I saw one headline that indicated Paul had already released the name of the whistle blower – can’t find it now though.)

So Chief Justice Roberts knows who the whistleblower is?

Exactly! He didn’t say whistle blower in his question.

All he is allowed to do is preside, not to make rulings of any sort.

Apparantly he has exercised the authority to keep the whistler blowers name secret. I doubt that he has such a power.

Just like the chairman of any meeting, he does have that power unless a majority of the meeting overrules him.

One of the things that really annoys me is when Schiff gets up with a new question but refers back to the last question and comments on it. Roberts should stop that immediately. That is not the new question and should not be allowed. But hs is such a pussy that he wouldn’t do anything like that. Oh wait, he just censored Rand Paul’s question completely!